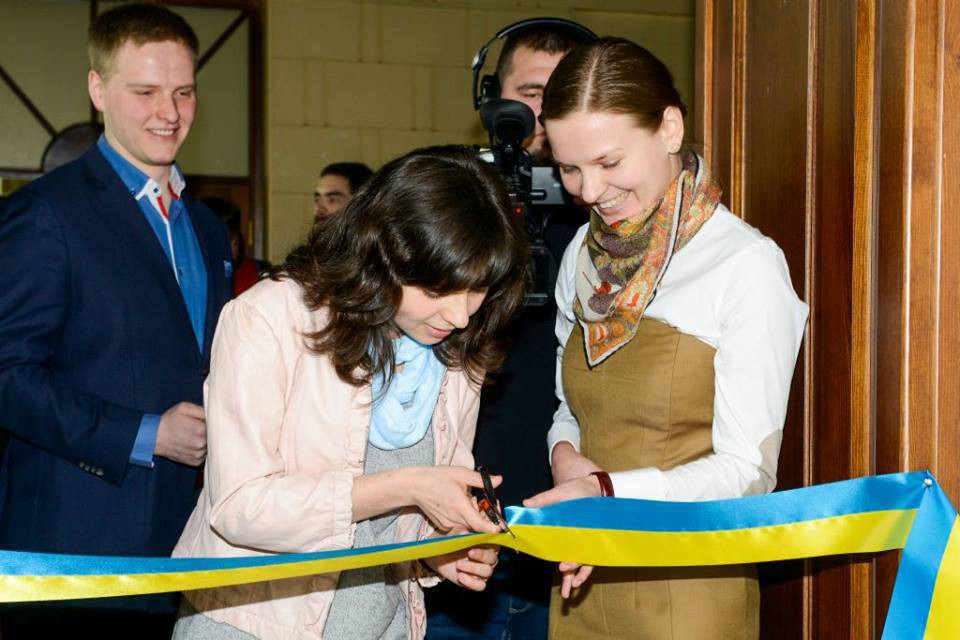 A summary of the activities of the Open Dialog Foundation in Ukraine and the opening of the “Ukrainian World” centre were the themes of the press conference “#WeWithYou”, held in Warsaw on 7th April 2014. The conference featured a guest performance by the Taraka band which waived their royalties on their newly released recording and, through the Foundation, donated funds to help families of those injured on Maidan.

At the same time, the “Ukrainian World“ centre was opened at 63 Nowy Świat, Warsaw, which provides legal assistance to Ukrainian citizens. The centre also hosts a Maidan exposition officially recognised as a branch of the Maidan Museum. Some of the artefacts have been provided to the Foundation by the legendary 7th Sotnya of Maidan Self-Defence. The exhibition includes, amongst other things, helmets and the bulletproof vest of one of the heroes of the Nebesna Sotnya, Andriy Sayenko. “Ukrainian World“ also organises cultural events devoted, inter alia, to Polish and Ukrainian traditions.

During the conference, Bartosz Kramek, Chair of the Foundation Council, summarised the Foundation’s assistance activities for Ukraine between 21st November 2013 and 7th April 2014.

From the very outset, the Foundation monitored the developments in Kiev, engaging in observation missions Polish MPs and local government representatives. Initially, support was expressed through the organisation of meetings with representatives of Ukrainian civil society, the media and politicians. Once the Ukrainian authorities opted for a confrontational strategy, the nature of activities undertaken by the Foundation in Kiev changed too. A real long-term commitment proved necessary. Towards the end of 2013, an observation mission set off which envisaged the permanent presence in Kiev of a group of several volunteers. They monitored violations of human rights and ran an information and educational campaign on, inter alia, the functioning of the European Union and the use of peaceful methods of protest. The Foundation in Kiyv worked with EuroMaidan services – doctors, Self-Defence, Euromaidan SOS, AutoMaidan and the media. When the protests spread beyond Kiev, the ODF mission was extended to cover Ukraine’s regions to which the Foundation sent more of its volunteers. It ultimately reached out across 14 Ukrainian towns and cities.

In total, 480 volunteers from 7 countries volunteered, 54 of whom went to Ukraine. More than 30 volunteers worked in the Foundation’s tent on the Maidan, distributing more than 9000 items of informational material and preparing 118 documents on the observance of human rights. The list of those repressed included about 570 people. Based on sources such as information provided by volunteers, the Foundation’s analysts drafted 11 reports which were then delivered to institutions such as the Council of Europe and European Parliament.

In parallel, in Poland, the Foundation organised a medical collection with the help of organisations, schools, offices, MPs and individuals from throughout the country. The medicines collected were given to the chief doctors of the EuroMaidan Medical Service. In total, 3010 medicinal items were gathered. In addition to medication, a collection of money was organised too. We raised a total of PLN 532,051.50. Nearly half of the amount was spent directly in Ukraine which involved quickly moving the funds and organising transport under conditions of uncertainty at border crossing points. The humanitarian aid also included the provision of 200 protective vests and a satellite transmission system.

After the tragic events of 18th February, the Foundation also engaged in helping victims and their families. We helped, for instance, to purchase a hand prosthesis for a Maidan activist, organised the transportation and medical treatment of 7 people and provided assistance to 10 refugees in Warsaw. We also brought 23 family members of the injured persons to Poland. The victims were able to rely on psychological and legal assistance too.

The humanitarian aid provided by the Foundation was accompanied by numerous cultural and educational events. These included 9 concerts, 11 debates, 5 exhibitions and 1 city game in Poland and in Ukraine.