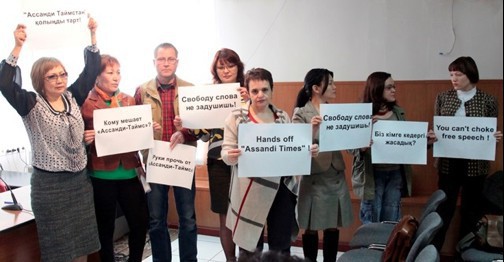 Report: Independent and opposition media in Kazakhstan are on the brink of annihilation

In order not to suffer the same fate as the ousted authoritarian government in Ukraine, Kazakhstan authorities crack down on inconvenient journalists and adopt repressive amendments against the media in the law

Introduction: The authorities ‘shut off the air supply’ to independent media

Over the past 1.5 years, independent and opposition media in Kazakhstan have found themselves on the brink of annihilation. After the Zhanaozen tragedy, Kazakh authorities witnessed the authorities’ determination in the fight against political pluralism and dissent in the country, as well as their desire to maintain control of the information space and public opinion. 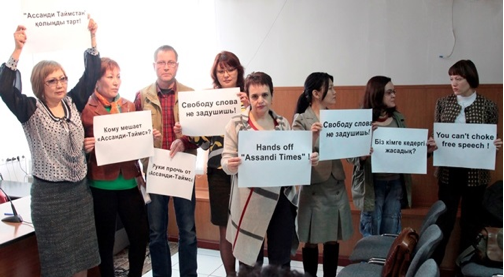 In connection with the revolutionary events and the overthrow of the authoritarian government in Ukraine, Kazakh authorities are striving to protect themselves from potential public protests. For this purpose, amendments which are repressive towards the media, are being introduced through legislation. In particular, the Kazakh authorities have given themselves the power to compulsorily censor and arbitrarily close any media outlets during states of emergency. This policy is aimed at preventing the ‘leakage’ of information which is inconvenient for the authorities, as happened in 2011, when the world heard about the sanguinary massacre of protesting oil workers in Zhanaozen. In addition, the Kazakh parliament permitted the General Prosecutor to suspend social networks and Internet resources without a trial, should they be deemed to have been used for ‘criminal purposes’.

After closing all the most influential independent media outlets in December 2012, Kazakhstan has continued to oppress smaller (in terms of the circulation volume) independent media outlets. In violation of all its international obligations, the Kazakh government is conducting a full ‘mopping-up’ of the information field. The mechanism of closing or suspension of the issues of inconvenient media outlets is carried out through litigation, which is merely a formality and follows an identical scheme with gross violations of the principles of a fair trial. Independent journalists are subjected to systematic pressure in the form of threats, assault, physical violence, also for their participation in protests and expression of their civic position.

In the process of ‘mopping-up’ of the information space, the authorities flout international obligations in the field of freedom of expression and opinion and deprive the society of the opportunity to obtain information from different sources. The security forces subject journalists to arrests and battery. The Kazakh government does not create a safe and supportive environment for the journalists so that they are able to perform their professional duties; instead, it applies censorship, which is prohibited under Article 20 of the Constitution and Article 2 of the Law ‘On Mass Media’.

This report presents an analysis of new ‘draconian’ media laws, provides updates on the closure and suspension of activities of the media outlets; searches in offices, criminal proceedings under charges of libel, beatings and arrests of independent journalists, the prosecution of the former employees of the ‘single media outlet ‘Respublika’ who were practically taken revoked of their right to carry out their professional activities. Kazakh authorities not only increasingly impede the freedom of speech of the media, but also create new legal mechanisms in order to fully eliminate independent journalists.