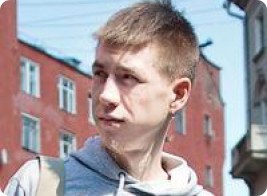 The case of Dmitriy Putenikhin

Biographical note: Dmitriy Putenikhin, literary pseudonim “MatveyKrylov”, born on Janurary 05, 1989 in the city of Gai (Orenburg District, Russia). A member of the political party “The other Russia”.

Social activity: from his youth he actively participated in sports: swimming, football, he graduated from the school of art. Dmitriy Putenikhin initiated a revival of the “Mayakovski’s readings”, he was an organizer of a number of contemporary art exhibitions, he was a member of the Fourth Moscow Biennale of Contemporary Art.

Political activity:  In 2003 he became a supporter of Eduard Limonov. On October 24, 2009 he was  sentenced under Article 282.2  of the Criminal Code of the Russian Federation 9CC of the RF) (“Participation in activities of an organization recognized as extremist”) for the peaceful capture of the reception office of the Russian Ministry of Foreign Affairs of the Russian Federation. He was convicted to one-year conditional imprisonment with  suspended for a period of two years. He proclaims the ideas of straight edge, vegan and non-violent struggle, according to the legacy of Mahatma Gandhi.

On October 28, 2011, in the protest against unjustifiably strict sentences with regard to the Manege case, the civil activist Dmitriy Putenikhin splashed water over the prosecutor Alexei Smirnov.  When splashing the water over the prosecutor, Krylov shouted: “We will never forget, we will never forgive”. This moment is recorded on numerous video tapes.

Dmitriy Putenikhin was detained on the spot and taken into custody. During the first two days he received charges of disorderly conduct under Article 20.1 of the Administrative Code of the Russian Federation, however, on the third day the administrative Article was re-qualified into a criminal one. On October 31, 2011 the Tver Court put the activist under arrest until December 30, 2011 under Article 296 paragraph 2 of the Criminal Code of the Russian Federation («A threat or acts of violence in connection with awarding justice”). On November 23, 2011  an apellate court will consider the appeal against the decision of his arrest.

The investigating officers took the word of prosecutor Smirnov, who claims that Dmitriy Putenikhin  shouted out the phrase “Death to the prosecutor!” and by this utterance he expressed a threat to his life. According to the video recording, made at the moment of the incident, Dmitriy Putenikhin did not  pronounce anything like this. This was also confirmed by the expert linguistic treport. However, these facts did not influence the ruling of the court.

It is noteworthy that  Judge Yelena Stashina is famous for being included in the “Magnitsky’s list” The judge agreed with the reasoning of the investigator Alexander Petrichenko, who insisted that, if released, Dmitriy Putenikhin would continue to “engage in criminal activity”, and would pose a threat to the safety of witnesses in the case as well as the aggrieved prosecutor. In addition, according to the judge’s opinion, Dmitriy Putenikhin may very well abscond during the process of investigation as he does not have a  stamp confirming his permanent place of residence or work (he was dismissed in the morning of October 31, 2011 from the post of a technical administrator of one of the programmes of the Public Russian Television channel before the court case started).

Defenders  of human rights and Dmitriy Putenikhin’s collegues demand that a ban be put on the use of courts and law-enforcement bodies as an instrument of political repression and a fight against non-conformity.