Search
The Open Dialogue FoundationNewsUkrainian journalists have been released in Slavyansk 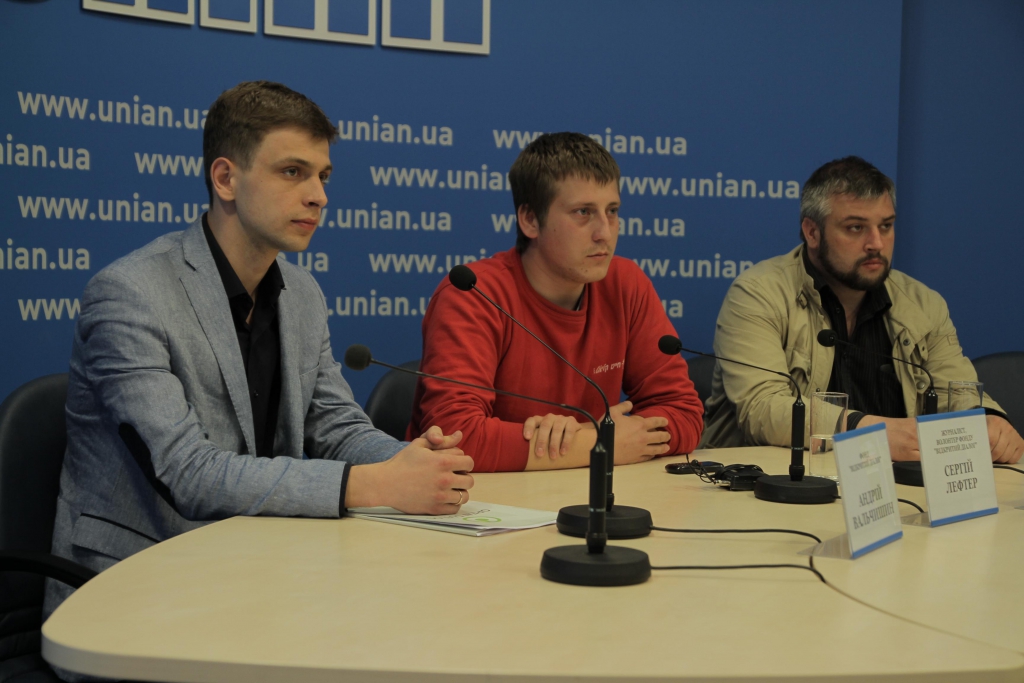 On May 8, 2014, a press conference was held within the premises of UNIAN in connection with the release of Ukrainian journalists, Sergey Lefter and Artyom Deynega.

Cases of capturing and holding in captivity Ukrainian and foreign citizens are becoming more and more frequent in the East of Ukraine. As Andriy Valchyshyn, the representative of the Open Dialog Foundation in Ukraine, stated, “In the whole world, journalists and doctors enjoy immunity during any kind of confrontation. In Ukraine, however, Russian terrorists not only detain representatives of these professions, but also trade on their lives and health.”

Sergey Lefter who had been captured by Russian terrorists and spent 3 weeks in captivity in the city of Slavyansk, finally returned to Kiev on 8 May. Artyom Deynega, who had been captured on 13 April, 2014, was also rescued and transported to Kiev along with Sergey. Artyom Deynega had been preparing live news reports from Slavyansk, publicising them via Internet, which became the subject of accusations on the part of Russian terrorists. He did not take part in the press conference, as he was deeply worried about his relatives who are still remaining in the danger zone. Artyom is now safe in Kiev, and his physical condition is satisfactory.

Sergey Lefter went to Slavyansk (Donetsk region, Ukraine) on 14 April 2014, in order to write a spot report. On 17 April, it became known that he had been captured. Sergey Lefter, working as an independent journalist of the Open Dialog Foundation, was a member of the monitoring mission in the East of Ukraine; before the trip, he had worked as an observer in the Crimea.

On 8 May, at the press conference in Kiev, Sergey told the journalists about his time in captivity. “On 15 April, I was in the centre of Slavyansk, talking on the phone with representatives of the Open Dialog Foundation, describing the situation in the East of Ukraine. Two men approached me and detained me under the pretext of verifying my documents. When they found out I had been at the EuroMaidan, they accused me of cooperating with the Right Sector and spying. I spent the next 2.5 weeks in captivity.

The first week was especially hard. I had my hands and feet tied with an adhesive tape, my eyes were sealed. They constantly threatened me, called me a rightie, a benderovets, a journalist whore. We were fed twice a day with food brought by relatives of the locals who were being held in captivity as well. We slept on the floor. At the coldest nights we cuddled together to keep warm.

We did not know what to expect, and this was the scariest thing of all. At first, there were two guys from the Right Sector kept together with me. They were taken away soon, allegedly for an exchange. After my release, I recognised these guys in the pictures on the Internet – they were found together with MP Vladimir Rybak, with their bellies ripped open and signs of torture on their bodies. During the questioning I was beaten, but in comparison to others it was not beating but merely slapping. I heard the cries of other captives and the sounds of blows from the neighbouring rooms.

The last week was easier. They untied my hands and feet, let me out several times a day to clean up the territory. It was a bliss to be able to move and breathe in fresh air – in the smallest rooms, where captives are held, there is very little space and it’s impossible to move.”

Sergey Lefter was released from captivity on 2 May at around 10:30 p.m. They did not return his documents, equipment or money. He reported that there were also several other persons who were kept in captivity at that time: Pavel Yurov, a theatre director, with his colleague Denis, and Igor, a 19-year-old student from Kiev. The further fate of the captives remains unknown.

It was Viktor Maystrenko, a Russian journalist, a volunteer of the Open Dialog Foundation, who helped transport Sergey from Slavyansk to Kiev. “There were three main problems”, Maystrenko says, “freeing Sergey, finding a safe place for him to stay in Slavaynsk and finding a way to transport him to Kiev. We made several unsuccessful attempts to leave Slavyansk, during one of them armed people fired at our car.” Viktor Maystrenko could not provide all the details of the journalists’ release but, according to him, the Russian passport proved to be helpful: “The checkpoints are mostly controlled by drunk people with criminal background who have a very positive attitude towards Russians.”

When a journalist asked whether the relevant Ukrainian authorities helped to set Sergey Lefter free, Andriy Valchyshyn told that on 17 April, as soon as the Foundation became aware of their journalist’s disappearance, they immediately addressed the internal affairs agencies, the Security Service of Ukraine in particular. The reaction, however, was very slow. It was only on 21 April that the Donetsk regional police department replied that there was not enough information on Sergey Lefter’s kidnapping. As Andriy Valchyshyn noted, “nowadays the hostage-taking issue is to be the number one issue for the Ukrainian law enforcement bodies. It is important to involve the European community and provide it with objective information on the developments in Ukrain. Nowadays Russia, which has unlimited resources, is ‘buying’ politicians in Europe, planting the idea of separatism in Ukraine.”

Sergey Lefter gave several pieces of advice about how to behave in captivity: one should not show resistance in order not to give reasons for being punished; one should not lie at the questioning – it is obvious; one should not speak Ukrainian or have any Ukrainian state symbols; one should clean up their social network posts before going to the Eastern Ukraine. Viktor Maystrenko, in turn, stated, “One shouldn’t go to troubled regions just to take a look. There are bad people there who hold other people in captivity with the purpose of creating an “image for the TV” or using them as human shields during attacks. Neither lawyers nor money can help there.”

To conclude with, Andriy Valchyshyn declared, “I wish to express my gratitude to Ukrainian and international media, as well as human rights organisations, for their support and help. I also want to express particular concern over the fates of the people who are still being kept as hostages by terrorists. After the OSCE mission had been released, the voices raised in the support of these people have become much weaker. We call on the Ukrainian law enforcement bodies to use their best efforts to ensure unconditional release of all those who were captured in the territory of Ukraine.”