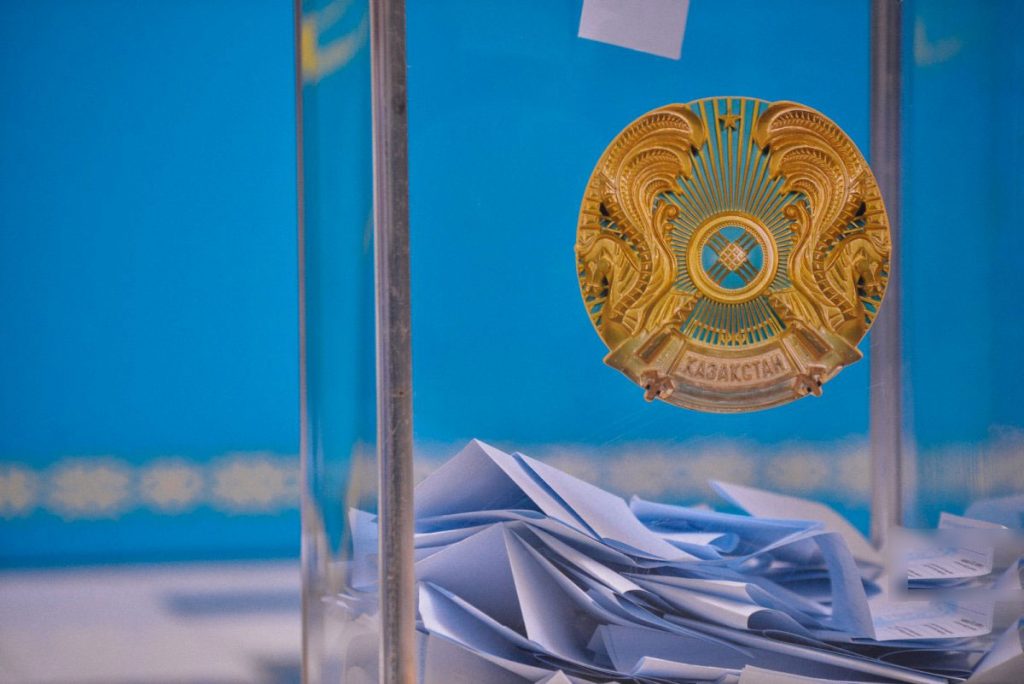 Kazakhstan fails to meet OSCE standards for democratic elections – in its statement of preliminary findings and conclusions the observation mission points out to: lack of competition, limiting voters’ fundamental rights & freedoms, and the politicized Central Electoral Commission (CEC). Among others, the U.S. State Department Bureau of South and Central Asian Affairs expressed concerns about the findings of the OSCE mission.

In the same vein, EEAS has underlined that “systemic shortcomings in relation to respect for freedom of association, of assembly and of expression continue to restrict the political landscape, and had a negative impact on the election”.

However, the data gathered by the ‘Voices of  Kazakhstan’ platform throws a completely new light upon the election results, contradicting the official version. According to its interim report, it is the Ak Zhol party that won the contest. As a reminder: with no real opposition on ballot, the leader of the opposition movement “Democratic Choice of Kazakhstan” (DCK), Mukhtar Ablyazov, called on citizens to use a protest voting technique similar to Navalny’s “smart vote”. The rationale was that voting en mass for the pro-government Ak Zhol party – but not the ruling Nur-Otan – will force the authorities to resort to large-scale falsification which will then be recorded by independent observers. The strategy proved successful. In fact, the counting protocols of local election committees, which independent observers got their hands on, show the Nur Otan party winning, but receiving only 39,8% of the vote, a figure far beyond the officially declared 71% of support.  Importantly, the “Voice of Kazakhstan” platform – accumulating and processing data from both independent observers and voting protocols – took into account electoral fraud. Yet, as it appears, even stuffing ballot boxes, carousel voting, or registering dead voters, could not provide Nur Otan with the 71 percent of the vote. Observers also note that one of the key indicators of voter fraud in protocols was inflated turnout. While CEC has announced the turnout to be 63.3%, the estimations of independent observers oscillate between 9,1-15,3% percent, with up to 20% in some localities.

Just before the election day, the authorities made it mandatory for the election observers to present a negative PCR result – a requirement applied in a discriminatory way as only independent observers were demanded to provide it. Observers were also denied access to or even kicked out of polling stations; and those who were let in couldn’t live stream electoral irregularities. In fact, this restriction, based solely on CEC’s declaration of Dec, 2020 had no legal ground (see the reasoning here).

Voters were deprived of basic information about the electoral process (the design of the ballots, how to fill the ballots correctly, low-key election campaign, no information on where polling stations are located,  or changing the place of the voting on election day) & election results.

In a number of polling stations, observers were forced out at around 8:00 pm for an alleged “disinfection”, and, thus, couldn’t watch ballot-counting. Among others, this was the case in Nauryzbai district of Almaty.

Another frequently recurring irregularity was a very low turnout, and the victory of Ak Zhol, reported by independent observers despite the official version stating otherwise. This was the case e.g. in the polling station no. 383 in Almaty.

The law enforcement forces kept impeding civil activists’ right to vote by: outdoor surveillance (at least 13 registered cases), ungrounded summons to police departments on election day, detentions and police brutality. Additionally, our monitoring registered 8 cases of administrative arrests and 2 cases of imposing administrative fines, as well as 11 cases of citizens being denied to cast a vote.

The authorities, however, chose to keep propelling their alternate reality. In an official statement Deputy Minister of Interior, Arystangani Zapparov announced that no one has been administratively or criminally punished. Similarly,  President of Kazakhstan Kasym-Jomart Tokayev said that the authorities “have done everything to ensure that the elections are fair”, and “all candidates were given equal chance”.

The secrecy of the vote was violated with voting booths lacking curtains in several polling stations. Simultaneously, under the pretext of guaranteeing the secrecy of the ballot, the Prosecutor General’s Office ordered the cameras in polling stations to be covered by tape… The trick, however, was rather intended to make it impossible for observers to review video footage of the vote counts, and, thus, challenge the illegal actions of the members of electoral commissions.

Opposition supporters who gathered at the main squares of Almaty, shouting “Boycott!” and “Nazarbayev go away!” were immediately detained. In total at least 350 peaceful protesters were arbitrarily detained during the election day, many of whom were subjected to police brutality. Alarmingly, 4 more detentions were registered a day after the elections.

For covering arbitrary detentions of civil society activists, at least 7 journalists were obstructed in their work, and one,  journalist Saniya Toiken was attacked.

As mentioned, with no opposition on the ballot (all registered parties are regime-sponsored satellite parties created to offer token competition), casting a protest vote meant voting for Ak Zhol. Those who cast their votes for this pseudo-opposition party, were also making  “harmonicas” out of the ballot paper, so that every voter could see for himself in the transparent ballot boxes  how many votes are indeed cast for Nur-Otan. Subsequently, many polling stations announced the action illegal.

Meanwhile, the pro-government side posing as opposition called for voting against all by spoiling ballots, which, if anything, would make it easier for the authorities to hide the electoral fraud.

The authorities also made public employees participate in election fraud. For instance, teachers at Astana school no. 50 were forced to change their clothes to vote for the ruling party at two polling stations.

Despite the lofty promises of democratization pronounced by the new President Kassym Tokayev, and as Anna Shukeyeva⁩, human rights defender & founder of Human Rights Movement 405 has concluded in her op-ed for Emerging Europe⁩: “this is an election without a choice, because Kazakhstani citizens cannot vote”.

Major cities have also experienced mobile internet outages. Consequently, in many cases, live streams from places of protests were not possible.

On Jan 12th, Facebook announced deleting a network of fake accounts, pages and groups linked to the National Security Committee and the Department for Combating Extremism of the North Kazakhstan Region Police Department. This is just one of the examples of the state-sponsored online propaganda that is ultimately covered by Kazakhstani taxpayers.

Recap of persecution of the campaign period

But… while elections are over, political prisoners are still subjected to torture and beatings in pre-trial detention facilities. Read more about the case of Askar Kaiyrbek here.

Will the international community believe the election results are legit?