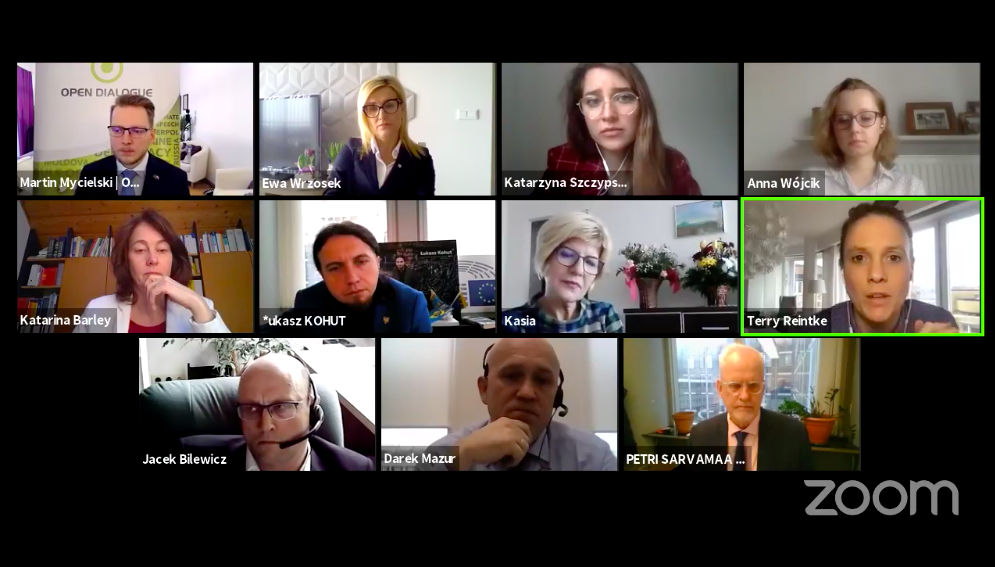 Prosecutorial standards in Poland are closer to those in Belarus than in the EU. ODF’s hearing for MEPs with persecuted Polish prosecutors

The aim of the hearing was to deliver first-hand insights on the ongoing politicisation of the Public Prosecutor’s Office and harassment of independent prosecutors by the Polish authorities to MEPs monitoring the rule of law crisis in the country as a part of their mandate. This was especially important given the fact that – as opposed to matters related to the judiciary – threats to prosecutorial independence in Poland are often overlooked by the European institutions.

The event was co-hosted by MEPs:

The event’s main speakers were:

The hearing was chaired and moderated by Martin Mycielski and Katarzyna Szczypska respectively.

In their opening statements the MEPs stressed that the European Parliament is concerned about the Polish authorities’ continuous attacks on the rule of law which constitute a blatant disregard for EU values. It was also reiterated that, despite alarming signals coming from Poland, the European Commission has not been strict enough in standing up to the country’s democratic backsliding. As declared by the MEPs, the European Parliament will keep trying to counterbalance it and put pressure on the Commission to do more, including imposing additional infringement procedures. MEP Terry Reintke also expressed the hope that the hearing will feed into the new package of punitive measures that are currently being planned at the Commission level. All MEPs also offered words of support to independent prosecutors fighting for the rule of law in Poland, stressing they all stand by their side.

In their presentations the prosecutors described the most pressing challenges facing the prosecution service under the rule of the coalition formed by the Law and Justice party (PiS).

Lex Super Omnia President Katarzyna Kwiatkowska stated that the standards of the Polish prosecutorial system resemble more the Belarusian one than those of the EU. According to Kwiatkowska, the prosecution service is now concerned with political issues that are important to the ruling camp, as the prosecution of the opposition and of participants of anti-government protests. What’s more, its head – who is also an active politician and the head of a ruling coalition party – puts the political interest first, not that of the justice system.

After the ruling coalition’s changes to the prosecution service, the Prosecutor General was granted sweeping powers, including the power to intervene in investigations and the power to appoint and dismiss personnel on all levels. Although the authorities, says Kwiatkowska, justified these changes by the need of boosting the service’s effectiveness, the true aim was to carry out a large-scale personnel purge.

Kwiatkowska also described how the authorities apply a “stick and carrot” approach to subordinate the prosecution service. While prosecutors with little work experience or qualifications are kept in line by the prospect of easy and swift promotion and financial incentives, experienced, independent prosecutors are subjected to politically motivated disciplinary proceedings, demotions and punitive transfers.

Based on her own example, Ewa Wrzosek described the most recent, concrete harassment measures faced by independent prosecutors. In January 2021, together with six more Lex Super Omnia prosecutors, she was transferred far away from her previous posting and place of residence. She was given two days to pack her life and move to a city located over 300 km away from her home, where she is to spend the next six months separated from her children and family.

Apart from being subjected to a punitive transfer, prosecutor Wrzosek is also under several disciplinary proceedings. She put herself on the authorities radar by, among others, initiating an investigation into the organisation of the (eventually postponed) May 2020 presidential election involving, as potential key witness, top-level figures from the ruling camp, like PiS Chairman Jarosław Kaczyński or PM Mateusz Morawiecki. The investigation – as all investigations of suspected authorities’ wrongdoings – was immediately quashed.

An important point, showing that the politicisation of the prosecution service in Poland is not just a national issue, was raised by prosecutor Jacek Bilewicz. Bilewicz described how investigations uncomfortable to the authorities are being transferred to units that, under the law, are not territorially competent to conduct them. They are next passed to obedient prosecutors in a discretionary manner by a personal decision of a superior prosecutor. It is not uncommon for the leading prosecutor or a unit chief to be then promoted or receive a financial bonus. Importantly, as pointed out by prosecutor Bilewicz, many such investigations concern the EU directly, including proceedings regarding cases (offence notifications) reported by the European Anti-Fraud Office (OLAF) which are then ignored by the Polish authorities. The issue particularly sparked the interest of the hosting MEPs who pledged to look closer into it, taking this up with the Commissioner for Budget and Administration Johannes Hahn and the Director-General of OLAF, Ville Itälä.

Finally, judge Dariusz Mazur alerted the participants to the illegal actions undertaken by the Internal Department of the National Public Prosecutor’s Office, created to police the judicial and prosecution services, that has initiated blatantly political prosecutions like the case of 14 Cracow judges handing down judgments on reinstatement of Prosecutor Mariusz Krasoń that were inconvenient for the authorities.

The hearing was covered by leading Polish media outlets like OKO.press, Archiwum Osiatyńskiego and Onet, and gathered 35 thousands views as of March 8th.

See our rule of law activities within the EU institutions:

See our other rule of law activities: