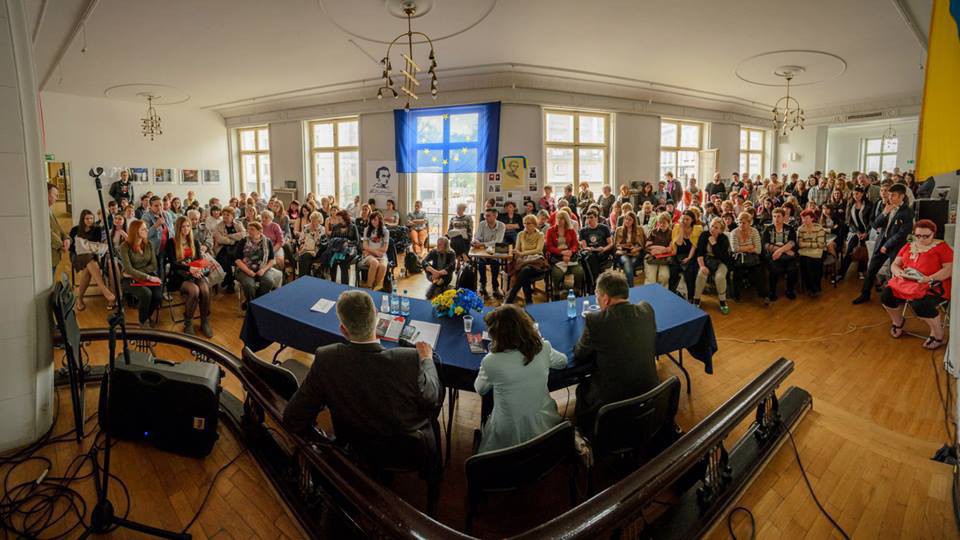 By request of Territorial Election Committee at the Embassy of Ukraine, pre-election debates have been held with representatives of candidates for presidency of Ukraine.

The meeting was also joined, by virtue of video conferencing, by the candidate, Olha Bohomolec. Petro Poroshenko (“Our Ukraine”) was represented by Oksana Yurynets, and Dmytro Yarosh (“Right Sector”) by Artem Luchak. The representative of “Svoboda”, Oleh Tiahnybok gave her apologies.

All participants expressed their gratitude for Poland’s help during the protests on the Maidan. It was noted, at the same time, that Ukraine’s most imminent problem was now maintaining its territorial integrity. In response to questions from the journalist, Olha Bohomolec commented, “The answer to all other [questions] is based on the fundamental one – about the unity of the east and the west. This is what we, as candidates, should focus on and strive towards”.

The representative of the “Right Sector”, Lukhak, confirmed that his party considered the borders established after World War II unchallenged and asserted no claims against Poland. He also said that the Polish and Ukrainian right-wing parties should easily be able to find a common language, “Today, we should be looking for what unites (us) and not what divides us. We are united by the presence of one big common enemy”.

Considering Poroshenko’s advantage in the opinion polls (according to the Kyiv survey by Razumkov Centre, he currently has 33.3 % support), Yurynets pointed out that election as the winner in the first round was a priority, thus saving time and money. Talks are now ongoing between the candidates which are intended to swiftly conclude the elections. Such supra-party coalition was established in Lviv, for instance, where authorities from various circles called upon, amongst others, Yulia Tymoshenko, the chief rival to Poroshenko, to withdraw her candidature. Lukhak did not confirm, however, whether the chair of the Right Sector was involved in the talks on withdrawing from the elections; this might have been misunderstood by laymen who form the Sector’s electorate, he added.

The meeting highlighted numerous controversies, mainly amongst nationalists. In front of “Ukrainian World” located at Nowy Świat 63, members of the Nationalist Movement were protesting against the invitation to the debate of representatives of Ukrainian social movements and political parties which refer to the activities of Stepan Bandera.

Ukrainian World was bursting at the seams, with more than 700 people expressing their interest in the meeting.

In the face of the protests, the Foundation issued a statement concerning the organisation of the conference with representatives of electoral committees for candidates for the post of Ukrainian Presidency. As a non-governmental and apolitical organisation, the Foundation detaches itself from the interests of any party or politicians, considering, at the same time, the approaching elections to be important from the viewpoint of stabilisation of the situation in the eastern neighbour’s country. The Foundation supports the right of the Ukrainians to freely elect their President in line with the standards of mature democracies. In addition to the organisation of the debate, during the elections on 25th May, an international observation mission will be undertaken by volunteers of the Foundation throughout Ukraine.

The debate was intended, amongst other things, to enable the Ukrainians living in Poland to take on the views of the main presidential candidates. Therefore, following the meeting with representatives of the electoral committees with the media, an electoral meeting was held for Ukrainian emigrants. It was attended, inter alia, by the Ukrainian Consul to Poland who provided information on how the vote would be organised and what requirements those intending to vote should fulfil. Ukrainian World was bursting at the seams, with more than 700 people expressing their interest in the meeting.

At 5.00 p.m. the meeting came to an end with flowers being laid by the monuments of Adam Mickiewicz and Taras Shevchenko.