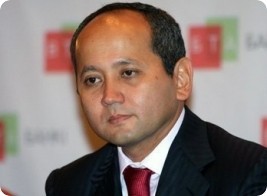 Kiev. April 11. UNIAN.  Human right activists are demanding that the the Office of the Prosecutor-General of Ukraine, the Ministry of Internal Affairs and the Security Service of Ukraine cancel the requests for the extradition of the Kazakh citizen and political refugee, Mukhtar Ablyazov, as well as several other individuals, from France to Ukraine.

The human right activists declared this at their press conference at UNIAN.

Oleg Levitsky – an attorney, a representative of the Ukrainian Helsinki Human Rights Union – says that Ablyazov’s case was contrived during Viktor Yanukovich’s rule.

He noted that Ukrainian investigative authorities drafted the written accusations and extradition requests under the instructions of the Kazakhstan intelligence agencies that had contrived accusations against the opposition politician, the  former owner of BTA Bank („БТА банк”) in their own country.

Aside from this, the human right activists demand that the Ukrainian security forces cancel the extradition request for Tatyana Paraskevich, Ablyazov’s colleague.

Lyudmila Kozlovskaya, a representative of Open Dialog Foundation, said that the letter with the aforementioned demands addressed to Oleg Makhnitsky, Arsen Avakov and Valentin Nalivaychenko had been sent on March 28.

In their letter, the human right activists also ask the heads of the security forces to officially apologise to the political refugees and their families who have suffered as a result of the actions of Ukrainian authorities. Among these are Dirar abu-Sisi, Filip Dolbunov, Ulugbek Zaynabetdinov, Leonid Razvozzhayev, Denis Solopov, Ruslan Suleymanov, Khamidullo Turgunov.

As Lyudmila Kozlovskaya says, it is also necessary that the Ukrainian security forces cancel the international warrant for a number of defendants in the case of BTA Bank, namely Igor Kononko, Roman Solodchenko and others charged in connection with this case.

Aleksandra Matviychuk, the Chairperson of the Civil Liberties Centre, said that Ukrainian law enforcement agencies are to cease their cooperation with the security forces of authoritarian countries which persecute their political opponents.

„It is obvious for us as human rights organisations, that we are to stop our cooperation with the security forces of authoritarian countries, cooperation that goes beyond the legal boundaries. It is a matter of state security”, Matviychuk said.

Lyudmila Kozlovskaya believes that, despite new people coming to power in Ukraine, there is still a danger of arrest and imprisonment for a number of political refugees – the citizens of Ukraine who had to move abroad during Yanukovich’s presidency.

„We are compelled to note that there is no chance of holding a fair trial in Ukraine nowadays, and this is why the return of any political refugee to Ukraine does not guarantee that he will not be persecuted. Until the judicial system, the public prosecution office and the Ministry of Internal Affairs have gained society’s trust; until lustration and reforms are carried out, it will be dangerous for the political refugees to return to Ukraine, and they should not come back”.

It is known that Ablyazov was arrested in the South of France at the end of July, 2013 upon the issuance of an extradition request by Ukraine. Moreover, similar requests had come from Kazakhstan and Russia.

Ablyazov is charged with the theft of over 6 billion USD in Kazakhstan. Ukraine and Russia filed similar charges against him in connection with embezzlement from local subsidiary banks of BTA bank.

Ablyazov fleed from Kazakhstan to London in 2009, when Kazakh authorities took over control of his bank; he was granted asylum in the UK in 2011. However, in 2012 he fled the UK where he had been sentenced in absentia to 22 months’ imprisonment for contempt of court, as he had concealed his assets from the British authorities; the assets were to be frozen by the court.

Ablyazov claims that all the charges against him are politically motivated and that they are all  attempts by Nursultan Nazarbayev, the President of Kazakhstan, to eliminate him as a political rival.

In the early 2000s Ablyazov organised an oppositional movement „Democratic Movement of Kazakhstan”, and was charged with ‘illegal enterprise’ and ‘abuse of power’ allegedly committed during his previous tenure as Minister of Industry and Trade; later, however, he was granted a pardon. Afterwards, he became one of the founders of the „Democratic choice of Kazakhstan” opposition party, closed by court order.