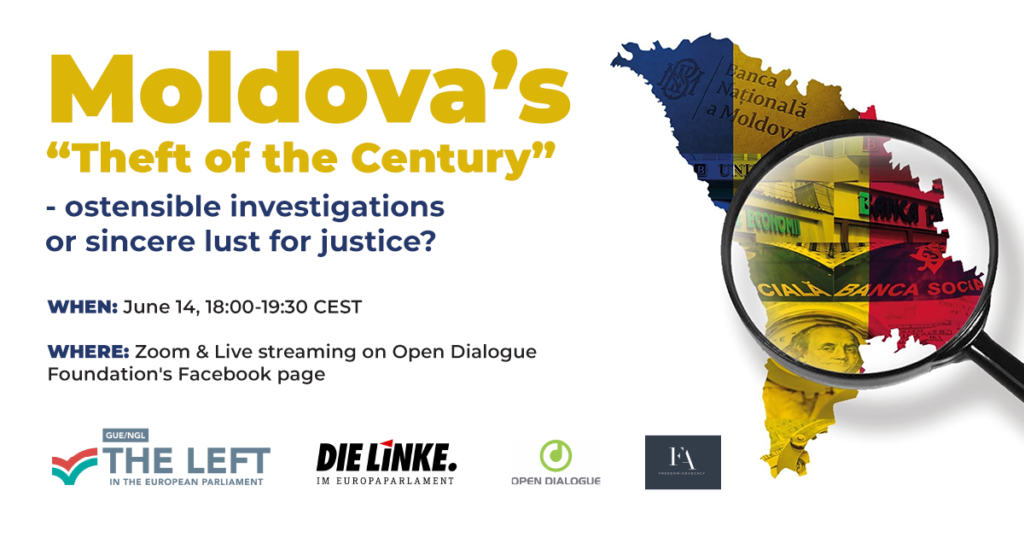 Invitation to an online event — Moldova’s “Theft of the Century”

The Left in the European Parliament, the Open Dialogue Foundation, Freedom Advocacy invite you to attend the online event

Moldova’s “Theft of the Century” – ostensible investigations or sincere lust for justice?

On the occasion of the publication of the study titled Moldova’s “Theft of the Century” – ostensible investigations or sincere lust for justice? and the upcoming snap elections in the Republic of Moldova, Moldovan experts and representatives of the Prosecutor General will gather to discuss the common grounds for cooperation between the EU and the authorities of Moldova on the topic of the theft of USD 1 billion from the republic’s banking system in the years 2012-2014.

In a changing political context in the country, a window of opportunity emerges for strengthening EU-Moldova relations, as well as for the advancement of anti-corruption reforms and the de-oligarchisation of Moldova’s key institutions. After the change in leadership, a thorough investigation into the $1 billion theft, which includes accountability of those responsible and putting in place of recovery mechanisms, has been prioritised within the General Prosecutor’s Office and the Supreme Security Council.

The theft caused the country enormous reputational damage and resulted in growing skepticism within a society deeply affected economically and politically. In order to restore the citizens’ trust in state institutions, it is important for Moldova to advance its investigations and bring those responsible to justice. Yet this fraud was conducted internationally and an important part of the stolen funds was traced to EU jurisdictions, making cooperation imperative.

During the last period, the rule of law in the Republic of Moldova has been closely monitored by the EU. In a European Parliament report on the implementation of the EU Association Agreement with the Republic of Moldova dated 28 September 2020, concerns about the lack of progress in prosecuting those responsible for the 2014 bank fraud were raised. Likewise, in a statement from October 2020 by the EU-Moldova Parliamentary Association Committee, the importance of the acceleration of the prosecution process and the recovery of misappropriated funds were underlined. At the same time, the Committee highlighted the importance of the EU Member States’ support in investigations for Moldova.

This study presents a summary of the most high-profile financial crime in Moldova’s history and examines the context as well as the progress in investigations. Furthermore, as this crime bears transnational implications, the study analyses the role of the EU and the involved Member States in identifying and recovering the stolen funds. During the event, the authors will also refer to a set of recommendations on how the EU can support Moldova in advancing the progress on the investigations, and their feasibility as well as potential effectiveness will be discussed.

The public event will feature the participation of Members of European Parliament, Moldovan experts as well as representatives of international NGOs and the Prosecutor General. The aim is to create an opportunity to brief MEPs on how the EU can help Moldova in fighting the feeling of impunity persisting in the country and accelerate the recovery of the stolen funds in order to benefit the Moldovan citizens.

English and Romanian with simultaneous translation