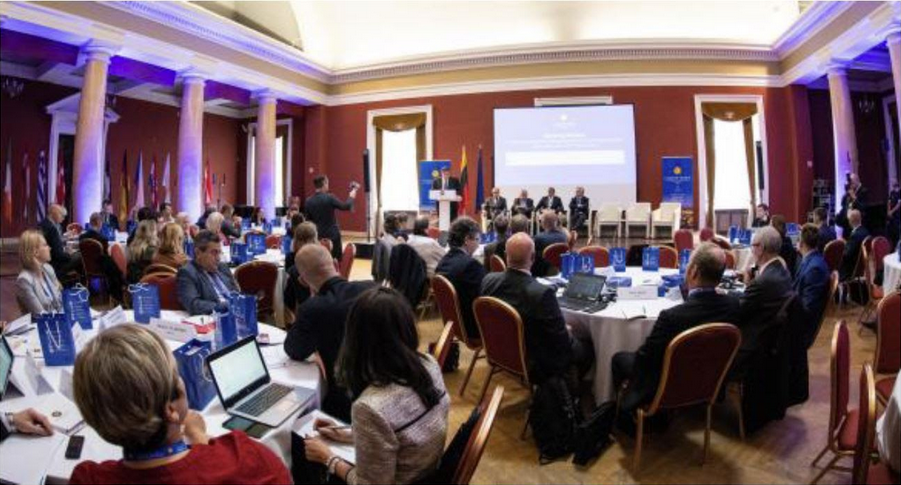 The Club of Venice is an informal group of Europe’s most senior and experienced government communications professionals. Founded in 1986, the Club meets at bi-annual plenary meetings hosted by the authorities of its member states. This year’s meeting, on June 10-11th, was hosted virtually by the government of Serbia, with support from the Chancellery of the Prime Minister of Belgium. It was simultaneously interpreted into French and Serbian.

The session tackled the challenges faced by public communicators and the media sector, as well as synergies between the two. Many speakers focused on changes to journalism following the COVID pandemic and threats to media independence stemming from disinformation, as well as the issue of journalists’ safety.

Our colleague Martin Mycielski was asked to join the expert panel, which consisted of:

The keynote speech was delivered by Christophe Leclercq, Founder of EURACTIV Media Network & Europe’s MediaLab and the session was moderated by Marco Ricorda, Communication Manager, Regional Coordination Office for the Mediterranean, International Centre for Migration Policy Development (ICMPD). The meeting was closed by Ana Brnabić, Prime Minister of the Republic of Serbia.

As the meeting was held under the Chatham House Rule we cannot report on the content of the speakers’ presentations or the debate afterwards, but we’re happy to present the transcript of the opening remarks presented to the group by Martin:

Thank you Marco, and thanks to the Club of Venice for including civil society representatives in this debate. It’s my first time with you here but I imagine CSOs are not typical participants of your events, so it’s even more appreciated.

Having said that, I am not a typical civil society representative. Before joining the non-profit sector I worked as the Brussels correspondent for a leading Polish daily, as a foreign ministry official and in European institutions. Neither my CSO is typical, as the Open Dialogue Foundation isn’t a standard human rights NGO or think-tank, but rather a group of activists and experts, who fight for European values like human rights, democracy & the rule of law, making enemies out of any state or actor who violates them. So be prepared I might ruffle a few feathers.

From this, hopefully unique perspective, I will voice my concerns regarding the topic of today’s discussion.

We speak a lot about threats to media independence, usually in the context of disinformation used as a weapon of hybrid warfare to undermine election integrity in Western democracies. But the threats I would like to discuss today are threats from within.

Firstly, my home state of Poland, following of course the path already taken by Hungary. The media there is only allowed to exist in one of two roles: a propaganda tool of the ruling party or an enemy of the state. Many independent outlets, like my former employer, Gazeta Wyborcza, are on the verge of bankruptcy – not just due to the general decline of print media, but due to government policies. These dictate that huge state advertising budgets are directed towards favourable outlets, while the independent and critical ones not only receive next to no state advertising, but they are removed from state-owned sale points like gas stations or post offices and their subscriptions are cancelled by government offices and state enterprises. For example during the economic crisis caused by the coronavirus, when advertising budgets were cut, the state raised funding via advertising for pro-government outlets by up to 87% to give them a lifeline, despite them having some of the lowest circulation.

The latest attempt at limiting media freedom came from an unsuspected source, when the state-controlled petrol refinery, Orlen – which should have no interest in journalism – simply bought the country’s largest local media group, Polska Press, with its 20 regional dailies, about 100 local weeklies and a number of websites. The official reasoning is always the same – the “repolonisation” of the media, which has supposedly been serving foreign interests until now. In practice, the ruling party creates more disinformation and propaganda tubes, like its flagship TVP, which before the last presidential elections aired North Korea-inspired ads for the incumbent president Duda as part of its evening news programme.

The attitude of government press services reflects this trend, as my queries, back when I was a journalist, were often left unanswered or even met with hostility, similar to the situation in the US under Donald Trump.

Attempts to stop this trend internally in Poland have been futile, with the party’s growing control over the judiciary. All hope rests now with the EU and our foreign partners, who need to leverage their political influence and condition the disbursement of EU funds, as well as economic relations on a bi-lateral level, on not just the respect of the rule of law but also on safeguarding media freedom.

The second threat I want to mention is perhaps less known, but it seriously hinders our work as a human rights NGO, hence we’ve been studying it for the last couple of years. With their worsening financial situation, many of even the most respected news outlets, both national and European, have resorted to receiving financial support from various malign, non-EU state actors. This cooperation often starts as a partnership to promote the culture, business opportunities or tourism in such a state. But as the outlet becomes dependent on these funds, it starts publishing sponsored content often indistinguishable from real journalism; texts written by state officials are presented as news stories; finally, single journalists are pulled in and incentivised to write content favourable to such a regime.

We have observed and documented this worrying trend already in the UK, in France, and even here in Brussels, with propaganda pieces and even disinformation being published on behalf of China or central asian regimes (which I guess is easier to swallow for the reader than content from the Kremlin).

To be clear, I do not blame neither those outlets, nor the journalists. The dire financial situation they are in forces them to take steps they wouldn’t have taken 10 or 20 years ago. That’s why you, all of us, need to find new ways to support them and preserve their independence.

I’m not in a position to provide solutions to these challenges, but I do want to end on a positive note, as I do see some positive trends. Partnerships, like that between my Gazeta Wyborcza and Deutsche Welle, or the media network presented by Christophe Leclerq, reprinting of high-quality content, sharing of investigative journalists. Also the multi-newsroom approach of EurActiv, or Politico Europe partnering with the Polish Onet and bringing american quality and standards not just to the EU bubble, but also journalism in my native Poland.

I do hope these positive trends stay and grow, supporting independent, quality journalism, and providing it with strength and the resources to resist both state interference as well as the tempting offers from beyond our Eastern border.

Thank you again for this opportunity and I hope for a fruitful discussion ahead.

More on this topic:
freedom of media , Poland , rule of law in Poland , COVID-19 , Club of Venice , disinformation