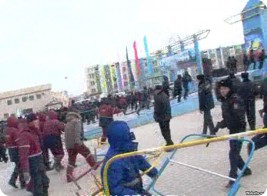 Emergency announcement! Mass dispersal of the striking oil workers with the use of special measures started in Zhanaozen

On 16thDecember, 2011 in the city of Zhanaozen at approx. 10 a.m. local time on Independence Day, striking oil workers and their family members, who have been taking part in the protests since 17th May 2011, were dispersed by means of extreme measures in the form of the use of noxious gases and the deployment of armed special forces.

As reported by the workers, the government forced children and young people to walk with flags through the square – where the workers are protesting. It is possible, that among the young people were provocateurs with water equipment and  petrol bombs. Oil workers stopped them, but they said the police were  unwilling to understand the situation and they used noxious gas and firearms  in order to disperse the crowd. That was the initialaltercation. Children and young people fled, abandoning flags, balloons and posters. There are unofficial estimates which report 31 civilians injuries and 4  fatalities, among them was a 16-year-old girl. At the same time none of the oil workers were killed or wounded.

This account was corroborated by activists of the “People’s  Front”: clashes between the police and the strikers (The striking oil-workers have repeatedly demonstrated their lack of fear for military forces over the preceding 7 months of industrial action. Similarly, military forces have shown indifference to the oil-workers ) were caused by some provocateurs.
It should be noted that it is extremely difficult to contact the oil workers by telephone; it is fair to assume that in the region,  mobile phone coverage has been disabled. Journalists of  ‘Stan.kz’  video portal have released video footage of the incident  which they posted on their website without any comment:

According to the latest information, The police used gas weapons against the striking oil workers as well as their supporters and civilians in Zhanaozen. They also fired shots not with rubber bullets, but with  live ammunition. Moreover, local residents say that three buildings are now on fire: The Mayor’s Office of Zhanaozen, the hotel “Aura” at 130 200, Mangistau Province, Zhanaozen, 2 Satpaeva Street, 2, and one of the offices of the “Ozenmunaygaz” company.

According to law enforcement workers, on 16th December 2011, in the city of Zhanaozen, Mangistau Province, mass riots ensued as a result of criminal acts committed by a group of people. In particular, they disrupted the celebrations on the Central Square of the city, which  were planned in connection with the annual Independence Day commemorations of Kazakhstan. Yurts (tents) as well as a portable stage were destroyed. Two police officers were injured (their personal details have not yet been disclosed).

Today, on 16th Dcemeber, at 6.00 p.m., the “Khalyk Maidany”  Public Association (“The People’s Front”) held a press-conference in the office of the “Alga” party (the city of Almaty, 77 Dosmukhamedova Street). The press-conference was devoted to the situation in Zhanaozen. According to the organisers, a video from the press conference will be posted online.

More on this topic:
Zhanaozen , riots