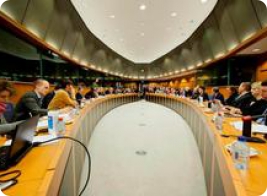 Oppositionists in the European Parliament talk about the election in Russia

The public hearing on the recent parliament election in Russia was held in the European Parliament in Brussels on December 6, 2011. Apart from the organisers of the meeting – Marek Migalski, MEP (ECR), Kristina Ojuland, MEP (ALDE) and Lyudmyla Kozlovska from Open Dialogue Foundation – Russian oppositionists, including Garri Kasparov, Denis Bilunov, Evgenia Chirikova, Oleg Kozlovsky and Nikolay Nikolaev participated in the hearing.

Garri Kasparov presented the realities of the Russian electoral system which does not allow the opposition candidates to run for the race. As only the candidates from the parties registered by the Kremlin are able to take part in elections, independent candidates for presidency must first obtain 2 million signatures within a 3-week period, while the maximum amount for one region is 50 thousand signatures. Kasparov also added, that Vladimir Putin’s power will not withstand the next 6 years, and an ‘Arab spring scenario’ is becoming an increasingly distinct possibility in Russia.

To continue the topic of election and pre-election standards, Evgenia Chirikova highlighted  cases in which oppositionists’ web-sites had been blocked and other means by which the authorities prevented the opposition from airing their views in the public domain. Still, she said that the result of below 50% of the votes for the United Russia party, in a sense, meant a victory for civil society. According to her, Vladimir Putin’s group did not even receive 30% of votes in reality.

Oleg Kozlovsky suggested that the goal of the Russian authorities was to create an atmosphere of fear which was manifested in the form of mass arrests of opposition activists. According to Kozlovsky’s information, around 500 people were arrested on the streets of Moscow, while in St Petersburg there were a further 100 arrests.

Nikolai Nikolaev described incidents of votes being bought by the Russian authorities. He also gave some examples of unlawful arrests where the main allegations made against groups of people by the militia were that one of the group of detained persons was not in possession of their Personal Identification Documents.

In Marek Migalski’s opinion, “The recent election in Russia became an unprecedentedly important political event”. Unfortunately, it was held under conditions which left a lot to be desired in terms of modern day democratic standards. Many parties were not registered, while other parties were unable to conduct their normal activities, the flow of information was restricted and protesters were arrested. A public hearing regarding the election is necessary; not only to give MEPs an idea of electoral processes in Russia, but also to  allow those whose voices were not heard, an opportunity to air their views.

Summing up the meeting, Marek Migalski stated that it cannot be said with full certainty that the election was free and honest. The MEPs’ obligation is to put pressure on the Russian authorities and to give them a clear signal that such a way of conducting elections is not, and will not be tolerated. Europe wants to cooperate with a free and democratic Russia.