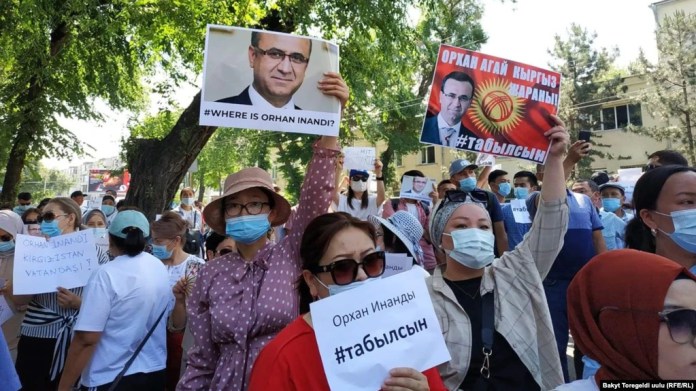 Mr Orhan İnandı, the current President of the “Sapat” International Educational Institution, has been missing since May 31, 2021, from around 21:00; according to statements made by the wife of İnandı, in a video posted on her social media on June 6, 2021.

Orhan İnandı had been working in Kyrgyzstan since 1995. İnandı’s car was found abandoned at around 3:00 AM local time, with his mobile phones left inside the vehicle – which had a punctured tire. The President of Kyrgyzstan, Sadyr Nurgozhoevich Japarov, has informed the security forces of the country to search for İnandı. However, the search is yet to give any clue as to the whereabouts of Mr İnandı.

A citizen of Kyrgyzstan, Orhan İnandı is the recipient of several state awards for his contribution to the reform and development of the Kyrgyz education system. The family of İnandı fears that his abduction might be the work of the Turkish intelligence or its proxies in Kyrgyzstan, and that he may have already been flown to Turkey.

Speaking to the media on Tuesday, June 6, 2021, İnandı’s wife, Reyhan, said that her husband’s jacket and phones were in the car. “We don’t have any eyewitnesses at the moment, but I believe he was abducted to be taken to Turkey. I am extremely concerned for his safety.”

Meanwhile, during a parliamentary session, members of the Kyrgyz Parliament called on the country’s interior minister, Ulan Niyazbekov, to make a statement about the disappearance of İnandı. Kyrgyz MP Ulugbek Ormonov said the disappearance of the educator has led to chaos in the country, adding: “The people are in a panic. The president has ordered the relevant authorities to locate İnandı. Nothing has been heard from him for three days. What is happening? The interior minister should make a statement. This is important for the Kyrgyz people.”

According to a Kyrgyz news portal, Deputy Interior Minister Nurbek Abdiev confirmed INTERPOL’s involvement at a meeting of the parliamentary committee on June 8, 2021.  “We are searching for İnandı internationally now.  We have sent instructions to look for him in Russia, Turkey and other countries around the world. He may have left the country by using other documents,” Abdiev said.

Turkey has been running a relentless campaign of abductions and irregular renditions against the members of the Fethullah Gülen Movement inside the country, whom the Turkish regime deems responsible for the thwarted coup attempt of 2016. The government has extended similar illegal abduction practices outside the country. As an international legal outcome, the European Court of Human Rights (ECHR) found that Moldova violated the ECHR in a lawsuit filed on 11 June 2019 by five Turkish citizens who were sent to Turkey on 6 September 2018 on the grounds that they were abducted with the cooperation of Turkish and Moldovan intelligence agencies. Nate Schenkkan of Freedom House stated: “After sham legal proceedings, the detainees have been handed over to Turkey, in clear violation of international law that forbids refoulement to a country where a detainee may face ill treatment. Ankara claims to have brought more than 100 people to Turkey through these methods.”

Turkish President Recep Tayyip Erdoğan had recently affirmed that Turkey’s intelligence apparatus had apprehended a high-level member of the Fethullah Gülen Movement and had promised to publicise the name of the individual on May 19. Once it was revealed that the person in question was a nephew of Fethullah Gülen, namely Mr Selahaddin Gülen, who was working in Kenya as a teacher with no managerial role within the Fethullah Gülen movement, President Erdoğan was mocked in the opposition media to have exaggerated the incident.

On the other hand, the abduction coincided shortly before President Japarov’s official visit to Turkey on June 9-11, 2021, at the invitation of President Erdoğan. Erdoğan and Japarov co-chaired the fifth meeting of the Turkey-Kyrgyzstan High-Level Strategic Cooperation Council in Ankara on June 9, 2021. While the details of the rendition of Selahaddin Gülen are still to be clarified, Orhan Inandi’s possible abduction by Turkish officers will undoubtedly amount to a significant blow to the Fethullah Gülen Movement, not only because of the managerial status of Orhan Inandi, but also because of the relative freedom the Movement has been enjoying in Kyrgyzstan. Whereas the schools run by the Gülen Movement in other Central Asia Republics have either been closed, or transferred to local owners, the schools run by “Sapat” were left untouched in Kyrgyzstan. “Sapat” runs 16 general education high schools, one international university, one international school and 3 primary schools. The Turkish Foreign Ministry has claimed in the past that Kyrgyzstan has become a haven for the Gülen Movement.

Inandi’s disappearance came at the same time as incidents that make Turkey’s move to a pirate state even more detestable, such as the Turkish state’s willful marriage to the mafia and the already infamous incident of the forced diversion of a flight to detain Belarusian opposition journalist Roman Protasevich by the Belarusian authorities. Both incidents have received coverage and underline to which camp of countries Turkey currently belongs. Sedat Peker, a convicted organized crime leader, has been publicizing revelations about how the Turkish state was involved in the killing of opposition figures abroad and in war crimes in Syria. Although there is no clear evidence of the involvement of the mafia in the disappearance of Mr Inandi, his family is concerned that, in the absence of a collaborating security establishment, the Turkish intelligence agents may have commissioned the abduction to members of the mafia, known to be active in the country.

It is important to note that instances of extraterritorial abductions or forced expulsions are commonplace in the Central Asia region, with autocratic leaders abusing extradition mechanisms and secretly cooperating with the law-enforcement agencies and special services of other countries to pursue critics of the regime, political opponents and asylum seekers abroad.

Among the most notable cases is the one of a well-known opposition blogger and asylum seeker in Kyrgyzstan, Muratbek Tungishbayev, who, on June 26, 2018, was abducted and transferred to Kazakhstan because of an unlawful cooperation between Kyrgyz special services and the Kazakhstani authorities. By enforcing the court’s decision on his extradition without waiting for his appeal and for the end of the procedure for considering Tungishbayev’s application for asylum, the Kyrgyz authorities de-facto abducted the blogger and transferred him to Kazakhstan. Once on the territory of Kazakhstan, he was incarcerated on the basis of fabricated charges of “extremism” and subjected to ill-treatment until his release later in that same year.

More recently, the Kazakhstani authorities attempted to “transfer back” two ethnic Kazakhs (which are Chinese citizens) to China: Murager Alimuly and Kaster Musakhanuly. Fearing for their lives, Alimuly and Musakhanuly escaped Xinjiang’s concentration camps and sought asylum in Kazakhstan. Based on a court decision, they were denied Kazakh citizenship and travel documents to leave the country, thus putting them at risk of being rendered to China at any time. Previously, on January 21, 2020, the asylum seekers were sentenced to one year in prison for illegally crossing the border, in violation of Kazakhstan’s international obligations.

Such cases are just a few examples of a broader pattern of abuses perpetrated by autocratic leaders, including in Central Asia, where informal levels of mutual assistance among authoritarian states have the aim of bypassing lawful procedures, depriving persons of the right to defend themselves in court, and preserving amicable bilateral relations with the counterpart, too often at the expense of human rights.