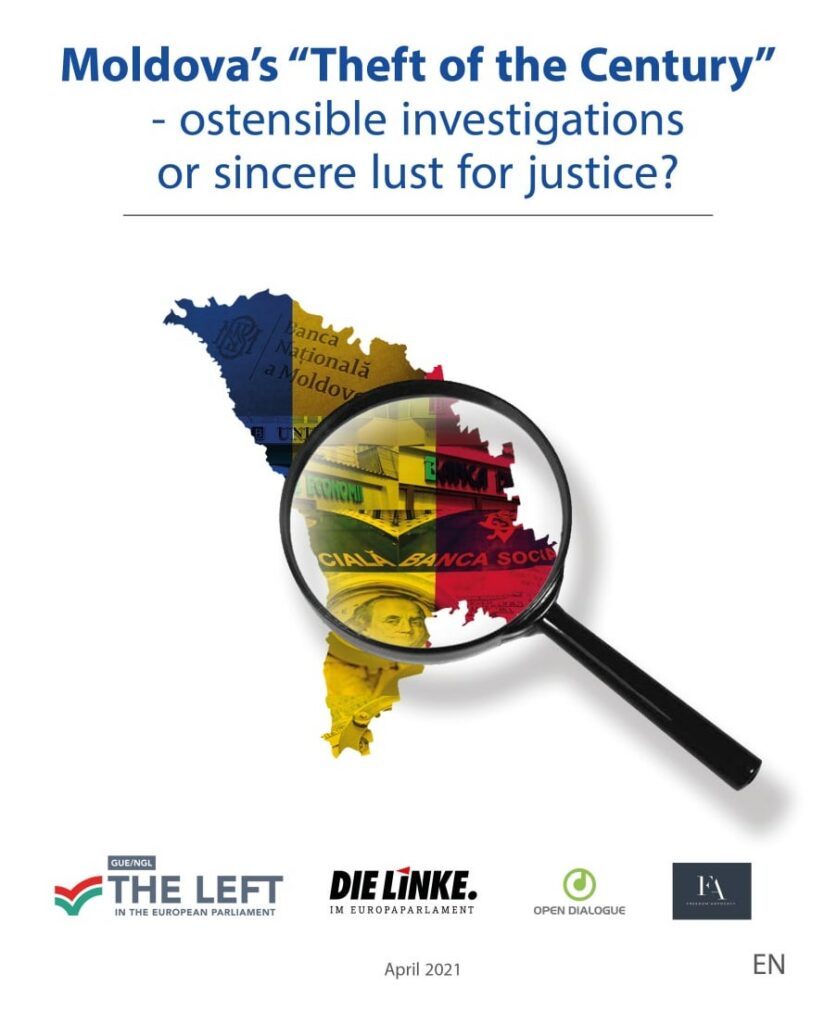 Moldova’s “Theft of the Century” – ostensible investigations or sincere lust for justice?

About the report and its relevance for the EU

The report “Moldova’s ‘Theft of the Century’ – ostensible investigations or sincere lust for justice?” presents a summary of the most high-profile financial crime in Moldova’s history, that took place between 2012 and 2014, and examines the context as well as the progress in the investigation. As this crime bears transnational implications, the report analyses the role of the EU and the involved Member States in identifying and returning the stolen billion to Moldovan civil society. The study concludes with formulating recommendations on how the EU can support Moldova in advancing the progress on the investigation, and their feasibility.

The findings of the study are of crucial importance as Moldova’s political landscape is transforming. Since Maia Sandu won the presidential election in Moldova in 2020, a thorough investigation into the $1 billion theft has taken place. This investigation includes accountability for those responsible and puts recovery mechanisms in place, which currently has been prioritised within the General Prosecutor’s Office and the Supreme Security Council. In this context, a window of opportunity emerged for strengthening EU-Moldova relations, as well as for the advancement of anti-corruption reforms and the de-oligarchisation of Moldova’s key institutions.

The rule of law in the Republic of Moldova has been closely monitored by the EU over recent years. In a European Parliament report on the implementation of the EU Association Agreement with the Republic of Moldova, dated 28 September 2020, concerns about the lack of progress in prosecuting those responsible for the 2014 bank fraud were raised. Likewise, in a statement by the EU-Moldova Parliamentary Association Committee in October 2020, the importance of the acceleration of the prosecution process and the recovery of misappropriated funds were underlined. At the same time, the Committee highlighted the importance of the EU Member States’ support in investigations for Moldova.

Public presentation of the findings of the report

The study was presented on 14 June 2021, during an online event in which Moldovan experts and the Prosecutor General gathered to discuss the common grounds for cooperation between the EU and the authorities of Moldova on the topic of the theft of USD 1 billion from the republic’s banking system in the years 2012-2014. The event provided an opportunity to brief MEPs on how the EU can help Moldova in fighting the feeling of impunity persisting in the country and accelerate the recovery of the stolen funds in order to benefit Moldovan citizens.

In his opening speech, MEP Helmut Scholz stated: “There’s a need to go together [in the same direction], extinguish corruption, overcome illegality and strengthen legality and democracy with trust being the very basis of the co-living of the future of the country”. He also expressed his concern about the growing inequality in Moldova and the impact of the banking scandal, emphasizing that “it is the obligation and responsibility of the EU, and in particular the involved Member States, to do their utmost to ensure that the stolen money is being returned”.

Alexandr Stoianoglo, Prosecutor General of Moldova, pointed out the fact that the involvement of Vladimir Plahotniuc, Moldovan oligarch and former de facto ruler of the country, in the banking fraud was not properly investigated, despite the evidence. In this regard, he ensured his readiness “to cooperate with the auditing institutions to control the situation and recuperate this bank fraud.”

Our Loredana Prijimireanu, Advocacy Officer at ODF and co-author of the study, touched on the urgency of starting an effective investigation as soon as possible, as “the process of asset recovery becomes more difficult day by day.”

A representative of Moldovan civil society and leader of the non-profit organization Freedom Advocacy, Ana Ursachi, expressed her request to the EU to “sanction those who grossly violate human rights, no matter where they are”, in particular “Ilan Șhor, as one of the main beneficiaries, along with Plahotniuc”. Furthermore, she advocated for further “transparent collaboration between civil society, politicians, experts both internationally and domestically” in the investigation process.

Alexei Tulbure, political analyst and Chief Executive director at the Oral History Institute of Moldova, stressed that “the particularity of this theft is that it involved the participation of many if not all state institutions.” Tulbure also pointed out the importance of the snap elections of 11 July, as they will indicate “whether we’ll be able to put a full stop to Plahotniuc’s epoque or preserve the status quo”. He concluded by stating that “we need a structural approach to investigate the theft and reforms are needed in Moldova so that the republic will never face such a crime again.”

Former political prisoner Grigore Petrenco talked about his personal experience of how the “Theft of the Century” changed his personal life and his loved ones by his peaceful protesting activities and the subsequent “revenge of oligarch Plahutniuc and the intimidation of the involved protesters.” Petrenco expressed his hope that “the new majority in the parliament will support the GPO in the investigations of the billion. For this to happen, cooperation with other countries like Cyprus and Great Britain is much needed to track and recover the funds”.

The recording of the event is available on ODF’s Youtube page.

Our recommendations for the EU institutions in brief:

Get acquainted with ODF’s activities in the Republic of Moldova: