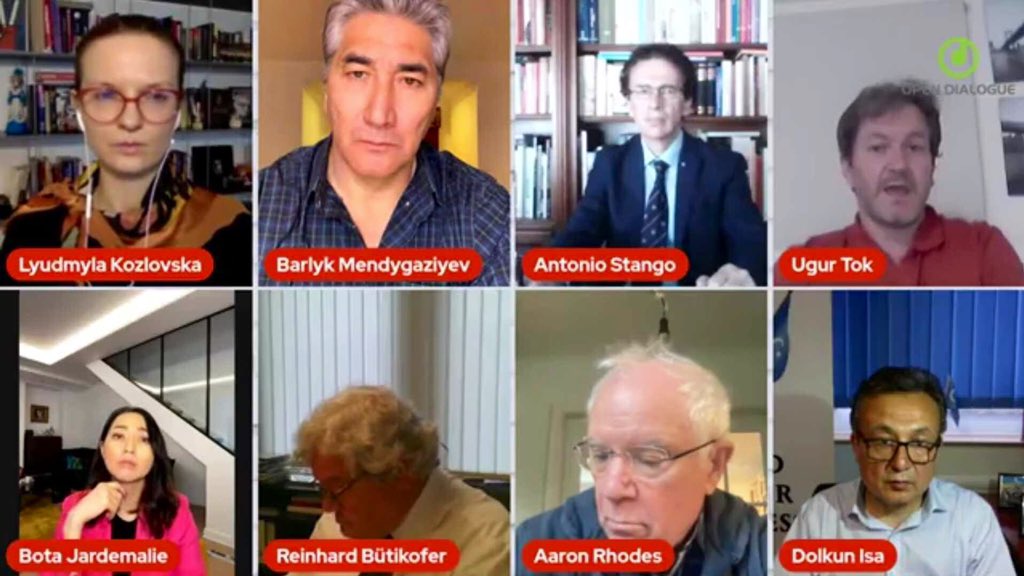 On 21 June 2021 the Open Dialogue Foundation (ODF), together with the Italian Federation for Human Rights (FIDU), organized the online panel “Authoritarian countermeasures to targeted sanctions: China’s and other autocratic responses”. Hosted by ODF President Lyudmyla Kozlovska, the event gathered human rights defenders and an MEP affected by China’s countermeasures to discuss the reactions of authoritarian states to sanctions and what civil society and democracies should do in the face of these illiberal threats.

Mr. Antonio Stango, president of the Italian Federation for Human Rights, delivered his introductory greetings and addressed the main topic: how can the EU and democracies react when faced with counter sanctions or other kinds of retaliatory behavior from authoritarian states?

Mr. Dolkun Isa, president of the World Uyghur Congress, spoke of the challenges of the relationship between the West and China. He welcomed the imposition of sanctions on China over the ongoing genocide in Xinjiang, remarking that China has become increasingly defiant: it ignored previous European Parliament resolutions, pressure from the West, reacted with its own countersanctions. He stated that the current strong trade ties with Beijing should not hinder Transatlantic and wider democratic cooperation against the Communist Party and called for Europe to be brave and continue standing up to Beijing’s dictatorial and genocidal behavior.

The President of the Forum for Religious Freedom-Europe and Senior Fellow at the Common Sense Society, Dr. Aaron Rhodes, spoke about the ways in which autocrats use human rights language for their own purposes. “Over the past few years we have seen an orchestrated campaign by dictatorial states aimed at transforming perpetrators of massive human rights abuses into victims”: they call sanctions “unilateral coercive measures”, deem them arbitrary and counterproductive, a form of imperialism and unilateralism. These governments have been hijacking UN bodies, in particular the UN Human Rights Council. Some countries have created the “Group of Friends in Defense of the Charter of the United Nations” to hit back against sanctions. They lobbied for and obtained a series of special procedures in the HR Council, among which is the “Special Rapporteur on the negative impact of unilateral coercive measures on the enjoyment of human rights”.

Member of the European Parliament with the Greens/EFA group, chair of the Parliament’s Delegation for relations with the People’s Republic of China, Mr. Reinhard Bütikofer, has delivered an extensive and detailed analysis of the challenges the EU is facing in the field of the defence of human rights. Commenting on the recent Chinese counter sanctions against Xinjiang-related EU sanctions Mr. Bütikofer said that “China is adopting a strategy of ‘mirror and escalate’”. Sanctions come at a price, are acts of political fight, and must be carefully chosen, well targeted and adopted with the intention of going all the way. The European Parliament, unlike many national governments, by freezing the EU-China Comprehensive Agreement on Investments has shown it can and wants to stand up to the Communist Party.

Mr. Bütikofer also said that sanctions can only work if they are coordinated with other democracies like Canada, the US, the UK. The EU needs to step up its game and stop playing only in defencive mode: it cannot let itself be blackmailed by trade ties with China when fighting for democracy.

The director of the Platform for Peace and Justice, Dr. Ugur Tok, raised the issue of Turkey’s authoritarian regime and the cowardice of Europe: “The EU wants democracy, rule of law and other contemporary norms in the neighboring countries, but does not want to do what is necessary and take risks”. He mentioned Ankara’s disregard for ECHR rulings, its use of the Ministry of Religious Affairs for political purposes, the abuse of presidential decrees to fire thousands of civil servants with no proper investigation, the illegal abductions conducted by Turkey all over Europe and in Kyrgyzstan. He called for the EU, together with like-minded democracies, to have the bravery to act against powerful countries and to adopt targeted sanctions against the perpetrators of human rights violations and Erdogan’s cronies.

Kazakh human rights defender and lawyer, Ms. Bota Jadermalie recounted her own experience of political persecution, blackmailing and threats from the Nazarbayev regime ever since she started working on a list of sanctionable officials responsible for the Zhanaozen massacre. She remarked the importance of support from the media and the European Parliament in keeping her safe, and praised the European Parliament’s upcoming resolution aiming to have grand corruption covered by the Global Human Rights Sanctions Regime: “all the money stolen from our nation is now hiding somewhere in bank accounts and real estate in Europe”. She called for a mechanism for the defence of human rights activists in authoritarian countries to be introduced by the Parliament.

Mr. Barlyk Mendygaziyev, a Kazakh entrepreneur and human rights activist, founder of the Freedom Kazakhstan Foundation, has recalled his personal story of repression by the Kazakh government because of his political activities. He remarked, like Ms. Jadermalie, that the Nazarbayev regime even tried to get him extradited with made-up charges: yet, he expressed optimism for the future of his country and said that “it is very important for civil society in Kazakhstan to have support from politicians both in the EU and the US”.

Lastly, Ms. Jadermalie called for human rights defenders to make large use of social media to reach decision makers and put pressure on authoritarian regimes. She demanded the EU and the US to stop believing Kazakhstan’s empty promises. Dr. Rhodes commented that bravery is needed: sanctions themselves cannot bring about radical change in authoritarian states, a regime change must be a stated goal Ms. Jadermalie agreed.

The full discussion can be watched on the Open Dialogue’s Foundation YouTube channel.

Get acquainted with our efforts to promote personal sanctions against human rights violators worldwide:

Read more on the EU’s Global Human Rights Sanctions Regime and how to improve it: