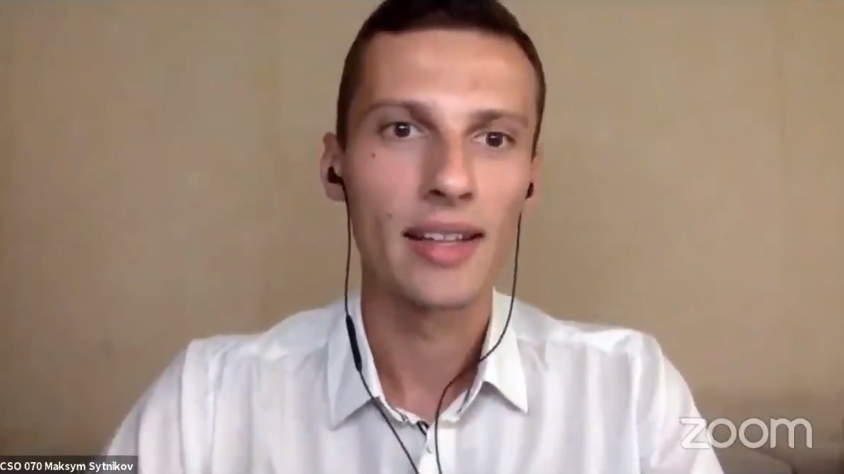 On 12-13 July our representative Maksym Sytnikov participated at the OSCE Supplementary Human Dimension Meeting (SHDM). SHDM is a platform for the OSCE Participating States and civil society to discuss progress made by the former in implementing OSCE commitments. The latest meeting was devoted to Digital Technologies and Human Rights.

During the first session Maksym Sytnikov addressed the issue of the recent intensification of the Polish authorities’ campaign against civil society, illustrating with the most drastic example – political arrest of the Chair of ODF’s Supervisory Board, Bartosz Kramek.

Maksym Sytnikov raised the issue of persecution of admins of the country’s largest online political community, “SokzBuraka”, a pro-democratic civil society hub with over 1 million followers. As Sytnikov said: “this Facebook page, just as the Foundation, is a constant thorn in Law and Justice’s foot, monitoring and criticising the increasingly-authoritarian government’s actions with satire and educational content”.

During the second session Maksym Sytnikov outlined the issue of Kazakhstani “electronic concentration camp” – the attempts to isolate Kazakhstanis from the free access to the Internet and social networks.

Sytnikov underlined the key role of the Committee of National Security of Kazakhstan (NSC) and it’s chairman Karim Massimov in illegal surveillance, intimidation and collection of citizens’ personal data in order to fabricate criminal cases against civil society representatives in Kazakhstan. Sytnikov said that the NSC cooperates closely with Chinese experts on the installation and the development of the “iron wall” to emulate China’s “electronic concentration camps”.

In conclusion Maksym Sytnikov called on the OSCE member states to impose personal sanctions against Karim Massimov and his family members for systematic violation of human rights: “Kazakhstani society really needs your help in their fight with dictatorship”.