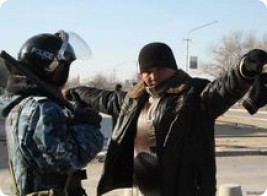 It is the fourth day that mass-riots have been ongoing in the region. Despite the fact that officially, the Ministry of Interior announced that the situation is under control, and the General Prosecutor’s office have confirmed only 11 deaths, the information coming from the province inhabitants proves the opposite. There have been many fatalities, most of which are civilian. Among them was a young girl, a pregnant woman as well as elderly persons. Police officers fired shots with live ammunition at unarmed civilians; they shot indiscriminately  into a crowd of people.

The city of Zhanaozen, where on 16th December mass disorders and clashes with police started, is now deprived of mobile phone network coverage and internet connection. The journalists, who are staying in the area of unrest, are subjected to pressure from the police and local authorities. In the village of Shepte, a blogger: Murat Tungishbaev was attacked by policemen before the journalists’ very eyes.  He was battered and his video camera and documents were confiscated.

In Kazakhstan, a day before the President declared a state of emergency in the region, such internet websites as twitter and youtube were blocked, and a number of on-line newspapers were subjected to DDoS attacks. The ‘Republic’ on-line portal which has operatively covered the events in the region, was  unaccessible to Kazakh users, and the forum of the site was attacked.

It is evident that the governmental bodies intentionally created an information blockage, so that the Kazakh people would not receive information about the incidents which are taking place there or about the extent of the disorders,  the number of fatalities, or the actions carried outby these very authorities.

As reported by the dwellers of the towns and villages to which military forces were deployed, there were cases that soldiers themselves took part in marauding raids. It appears that the army, which is supposed to establish and sustain public order, is actually destabilising the situation.

Until now it is not clear why it was in the city of Zhanaozen, where oil workers have been striking for the last seven months and where the police and the CNS have been continuously working under an intensified regime, that a group of unidentified young people appeared, initiated disorder and set fire to administration buildings. Who masterminds all these events? Who derives benefit from this situation? There are many questions but only one answer seems obvious: it is definitely not the oil workers who live in this region and who desire peace and well-being for their families.

The General Prosecutor’s Office passes its ‘sentences’ without judicial process when it calls the striking oil workers ‘criminals’. In the village of Shepte, police officers fired shots at civil inhabitants who blocked the railways as a sign of protest against the actions taken by the authorities which suppress the disorders in Zhanaozen by aggressive means. It is conspicuous that the government, which is not able to control the events, is only worsening the situation by shedding civilian blood.

Now, after the tragic incidents in the Mangistau Province, hundreds of families are left without a roof over their heads or any means of subsistence. Many families have lost their only bread-winners. But it is becoming apparent that the government is not intending to help those who are suffering, as it is carrying out penal operations in the region.

We kindly urge you to support the region’s inhabitants by means of shipping humanitarian aid such as food, clothes and building materials. In order to ensure an uninterrupted performance of this assistance, a commission comprising the EU representatives and the local NGOs members should be established.

More on this topic:
Zhanaozen , riots