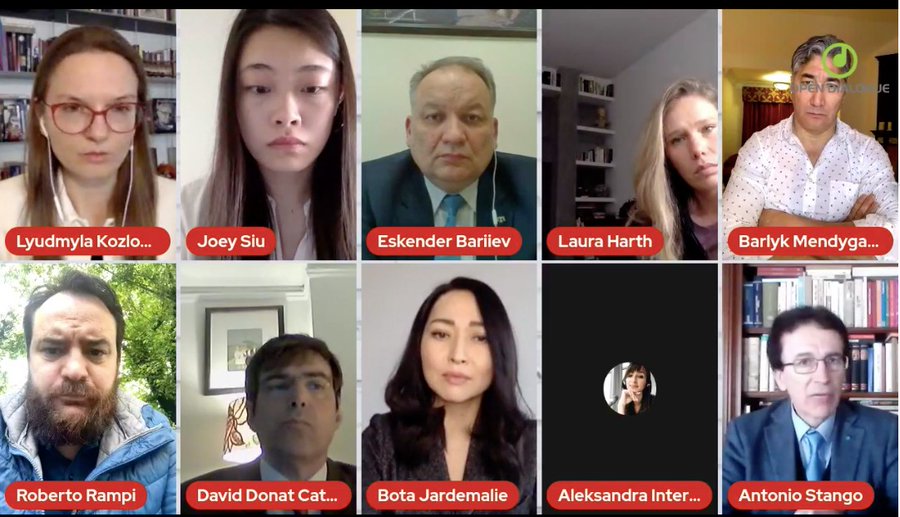 On 15 April 2021, ODF co-hosted an online conference on the new EU Global Human Rights Sanctions Regime and the effectiveness of personal (targeted) sanctions in safeguarding human rights. The event was co-organised in partnership with the Italian Federation for Human Rights, the Crimean Tatar Resource Center, Freedom Kazakhstan Foundation and the Global Committee for the Rule of Law.

The online conference – moderated by ODF President Lyudmyla Kozlovska – aimed at analysing strengths and weaknesses of the newly adopted EU Global Human Rights Sanctions Regime and assessed proposals of legislation in those EU Member States where the law is being discussed or under consideration, its complementarity with the EU regime and transposition in different national frameworks. The event featured the participation of members of EU parliaments, representatives of international organisations, opposition activists, human rights defenders and experts advocating for the respect of human rights in Belarus, Kazakhstan, China’s Xinjiang region, Hong Kong, Moldova, the Russian Federation and in the illegally occupied territory of Crimea in Ukraine.

The opening statement of FIDU President Antonio Stango stressed how Magnitsky sanctions are effective tools to fight impunity in those countries where perpetrators of gross and systematic human rights violations are not held accountable for their crimes, and stated that every single state should be able to use them. Stango acknowledged that the EU Global Human Rights Sanctions Regime is not a perfect tool as it does not target those involved in grand corruption scandals, yet he welcomed the adoption of the Regime. The speaker  concluded that it is necessary that  ‘we’, civil society and lawmakers of democratic countries do more and therefore “today’s discussion with experts, as well as Members of the Parliament is particularly important.”

In his presentation Eskender Bariliev, Head of the Board of the Crimean Tatar Resource Center, showed how Russia is deliberately trying to replace the population of the Crimean peninsula through acts of human rights violations: “Crimean Tatars and Ukrainians are intimidated through repressions and oppressed as they are considered to be a population that is disloyal to Russia. More than 500.000 Russians were brought from Russia to Crimea and about 50.000 Ukranian citizens were forced to leave.” Barliev highlighted how sanctions are the most important tool to strike back the Russian occupation and ongoing aggression against Ukraine.

Franak Viacorka, Senior Advisor to opposition leader Sviatlana Tsikhanouskaya, started his speech by referring to Belarus as a country turning into an “occupied Crimea”, due to its similar problems and nature of human rights violations. The journalist pointed out the slow and bureaucratic procedure of international bodies and stated that in general “sanctions are helpful and a quicker accountability mechanism than the International Criminal Court in the Hague.” Viacorka argued that sanctions against the regime in Belarus are not adopted in the scale they should be; the lack of political will and the extreme dependence on media attention obstructs this process in the Republic.

In the context of Kazakhstan, Barlyk Mendygaziyev, philanthropist and founder of Freedom Kazakhstan Foundation, expressed that sanctions are crucial in preventing tragedies from taking place and making Kazakhstan a second North Korea. “Currently, Kazakhstan faces 5 political murders, 27 political prisoners, 28 individuals that are convicted for political reasons with a ban on public and human rights activities. On top of this, 3 of our women are politically imprisoned; each of them facing up to 17 years of jail time. The reason for their sentence is the involvement in humanitarian aid for political prisoners and demanding sanctions for human rights violators.”

Lawyer Bota Jardemalie demonstrated how the de-facto President of Kazakhstan, NurSultan Nazarbayev, has built a corrupt and kleptocratic regime with his family members “keeping their assets and wealth in the West.” Jardemalie argued that Kazakhstani officials fear Western sanctions. Therefore, it’s the responsibility of the EU to “create a serious incentive for Kazakhstan to actually comply with the country’s international obligations on human rights.” She mentioned the example of Moldova, in which after the corrupt Plahotniuc was sanctioned,  civil society had a room to organise free and fair elections. “So, I’m asking the EU: Give our society a chance to succeed, impose sanctions on Nazarbayev and his cronies. We need a fast accountability mechanism.”

Hong Kong Watch associate Joey Siu highlighted that sanctions are important in the Hong Kong crisis, as the Chinese authorities violate human rights and benefit from other repressions. Siu talked about the recent crackdown on pro-democracy leaders to participate in institutionalised elections in Hong Kong, as well as how “it has been the first time since 1997 that the one country, two systems was not even mentioned by the Chinese government.” Besides human rights abuses in Hong Kong by Chinese officials, the advocate touchd on the “forced steralization, organised sexual harassment and forced labor in the labor camps” taking place in the East Turkestan region. Despite the effectiveness of targeted sanctions in the context of Hong Kong, she stressed that China is a superpower and will implement countermeasures in the political and economic sphere.

Italian Senator Roberto Rampi, one of the initiators of using Magnitsky-type sanctions in the Italian parliament, expressed the importance of the EU sanction regime to protect human rights. As the Senator stated “human rights is not an issue of one or two countries, rather, human rights should be built together.” Therefore, “making connections between politicians, members of parliament and civil society” is very important in his view.

Although Vice-President of FIDU, Eleonora Mongelli, welcomed the new Sanction Regime, she stressed its weakness in terms of the need for unanimity within the European Council and the lack of focus on corruption. In addition, she argued that civil society should be more empowered to have a voice in the EU Sanction Regime as their participation is “an added value in the process of uncovering human rights violations and collecting evidence.”

Laura Harth, Coordinator of the Marco Pannella Scientific Council of the Global Committee for the Rule of Law,  advocated for more coordination when it comes to targeting officials and individuals with both civil society and like-minded countries. Also, Harth pointed out that the “European Parliament should pressure the European Commission to include certain names in the Sanction Regime,” as the EP has a tradition of being in touch with civil society actors. The advocate emphasised the danger of hypocrisy and inconsistency of the EU or certain Member States by their involvement in the EU-China Comprehensive Agreement on Investment or the Nord Stream 2 project.

David Donat Cattin, Secretary-General of Parliamentarians for Global Action (PGA), stressed that targeted sanctions can only work in combination with other measures, such as “justice for the victims through reparation and smarter travel bans.” Cattin explained the goal of PGA as “creating a system through which we see sanctions as part of the broader toolbox for accountability and the fight against impunity” by working together with different democracies worldwide.

Our Paola Gaffurini closed off the discussion with welcoming cooperation between the jurisdictions of the U.S., U.K. and Canada in the context of targeted sanctions and the fight against human rights abuses. Paola Gaffurini mentioned ODF’s report “Servants of the Regime” which represents an example of  how “civil society actors can substantially support democratic governments in designating human rights abusers.” Finally, she urged the EU to cooperate with their democratic partners of non-EU countries when it comes to sanctioning individuals.

Watch the video recording of the event on ODF’s YouTube channel.