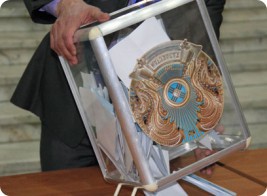 A briefing for representatives of the Kazakh mass-media was held in the Central Election Commision. Vladimir Foos, Deputy Chairman of the CECconveyed information about the course of the election campaign, its main stages, the legal basis of the election as well as requirements set forth in the Constitution and Electoral Law with regard to candidates for members of the Majilis of the Parliament and maslikhats in the Republic of Kazakhstan. Other issues were also discussed: the amount of the budget allocated for the organisation and staging of the election, results of nomination and registration of party candidates, ongoing activity and duties of the elective bodies, cooperation of Central Election Commission and the participants of the election process with the mass-media as well as the amount of received complaints. He stated that so far 39 notifications have been submitted to the CEC. On the day of the briefing, 47 foreign observers were accredited, including 46 from the ESCE/ODIR mission and 1 from the CIS mission of observers.

Kazakh political parties which are going to participate in the January election to the Majilis of the Parliament started their election campaign.  According to the election campaign schedule, campaigning activities commence with the termination of registration of the party lists and ceases at midnight (local time) on the day prior to the election – (at midnight on 13th January, 2012). The Kazakhstan Central Election Commission registered lists of eight parties, ‘Nur Otan’, ‘Ak Zhol’, ANSDP, ‘Auyl’, ‘Adilet’, Patriot Pary, “Rukhaniyat” and the Communist People’s Party of Kazakhstan. According to the CEC, the total number of registered candidates for membership of the Majilis which are to be elected from the party lists is 386, i.e. there are 4 candidates running for each seat.

The Republican Assembly of Democratic Society organised by the ‘Alga!’ People’s Party   with the participation of the Communist Party of Kazakhstan and leaders of the ‘Azat’ ANSDP inaugurated the election campaign of the opposition. 500 persons took part in the meeting. Among them was Vladimir Kozlov, the President of the Steering Committee for establishment of the ‘Alga!’ Party, Bulat Abilov, Amirzhan Kosanov, Zharmakhan Tuyakbai; – representatives of the ANSDP.

Experts of the Public Foundation ‘Ar. Rukh. Khak.’ (‘Honour. Spirituality. Verity’) are monitoring political pluralism in the mass-media. According to their observations made between 30th November and 10th December, as much as 52% of the space in  print media  was devoted to airing the activity of the ‘Nur Otan’ Party. On TV channels, the issues regarding ‘Nur Otan’ and ‘Ak Zhol’ amounted to 22% of broadcasting time for each party, the least amount of time was devoted to ‘Rukhanyat’ and The Patriot Party (5% for each party).

To celebrate the publication of the book entitled Nursultan Nazarbaev’s Eurasian project, turned into reality, a postage stamp depicting Nursultan Nazarbaev was presented. Its nominal value is 20 tenge, and it was issued in 50 000 copies.

In Zhanaozen, where the strikes of oil workers have been ongoing since 11th May, 2011, clashes occured. A large group of people ran into the main square during the Independence Day celebrations; then incidents of violence ocurred and arson attacks were carried out.  According to reports, the events were provoked in order to disperse the striking workers. The Prosecutor’s Office was able to confirm 14 fatalities as a result of the clashes and it has been estimated that there were around 80 persons injured.  On the same day, ‘Khalyk Maidany’ (‘The People’s Front’) Public Association held a press-conference, during which an attempt was made to present an independent report of the situation in Zhanaozen. On 17th December, the ANSDP put forward an initiative to establish an independent commission on current events, and the leaders of the party discussed the factors which motivated the police to use firearms against the unarmed civilians.  On 17th December, 2011 the Act  ‘On introduction of the state of emergency in the city of Zhanaozen, the Mangistau Province’ was enacted and it shall be binding until 5th January, 2011.  Amanzhol Kabylov, the head of the Department of the Interior of the Mangistau Province was appointed commandant of the city of Zhanaozen. As a sign of solidarity with the strikers, on 17th December, Shepte village inhabitants halted a train going from Mangyshlak to Aktobe and put forward a demand to stop the use of weapons against the strikers in Zhanaozen. According to prosecutors, the blockage of the railroad caused  disruption of the regular operation of transport, and as a result, 7 passenger trains and 3 freight trains were delayed. On the same day, a rally was held to commemorate the 25th anniversary of the December 1986 events. During the meeting, Khasen Kozha-Akhmet urged people to go to the office of the president’s party “Nur Otan” to express their protest and he confirmed his solidarity with the protesters in Zhanaozen. On 20th December, a meeting of the Government of RK was held in order to discuss the situation in Zhanaozen. The events drew the attention of the world society: rallies in support of the striking oil workers were organised in Ukraine and Russia, while the human rights organisation ‘Human Rights Watch’ and the U.S. Department of State expressed their concern regardingthe situation. Representatives of a radical Islamic group ‘The Soldiers of Khalifat’ stated that the events of the recent days shall not go unnoticed.

Kazakhstan received a share of 10 percent in the Karachaganak project. ‘Karachaganak’ is an oil and gas condensation field located in the Western Kazakhstan near the town of Aksai. It began operation in 1979. Initial reserves of the field are estimated at 1.35 trillion cubic meters of gas and 1.2 billion tons of oil and gas condensate. Half of the 10 percent acquired by Kazakhstan in the Karachaganak project was sold by the British BG Group, Italian ENI and Russian ‘LUKoil’ for more than one billion dollars. The second half of the company was given in exchange for a withdrawal of lawsuits initiated by the government of Kazakhstan against the operators of the deposit. Before the transfer of the share of 10 percent by Kazakhstan, the shares in the developed deposits were as follows: British BG and Italian ENI owned 32.5 per cent of the Karachaganak Petroleum Operating Group. Chevron controlled 20 percent of the group, “Lukoil” – 15 percent, Agip – 32,5 percent.