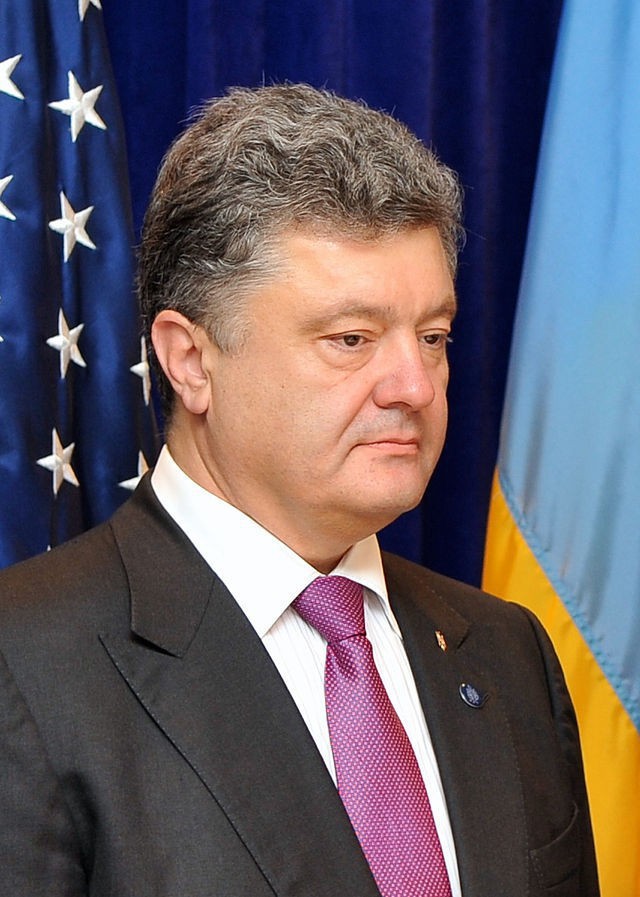 President Poroshenko faces 2 major challenges – how to bring peace for the east of Ukraine and how to solve economic problems of the whole country (starting with the eastern regions).

Poroshenko has to stop quickly the unrest in the east of Ukraine and retain support inside the country – that is the challenge. We know there are ideas supported also by some politicians in the West – some scenarios giving Russia the chance to control Crimea as long as they can. Russia (and its open and hidden allies) demand the neutral status of Ukraine – no NATO, no Association Agreement with EU, but close economic ties with the Customs Union led by Russia with “exclusive” conditions for Ukraine – but exclusive in a sense that Ukraine is to join only a russian led block, with the factories in military complex still linked to Russian military and space complex. This is something unlikely to be supported by the majority of the population in Ukraine.

Poroshenko does not want war and revenge but will achieve unity for Ukraine. How?

Second, a controlled corridor for Russian mercenaries that are willing to return home.

Third, peaceful dialogue, not with rebel leaders, but with the peaceful citizens of Ukraine. And not with current local deputies (Yanukovich’s clan, which betrayed Donbas and stole more from it that the entire country, exclusively ruled Donetsk province for 17 years. And now they are financing terrorists). Yanukovich’s clan is totally responsible for the political and socio-economic situation, for unemployment, poverty and the refugees and for murdering civilians.

Legitimate dialogue partner for Poroshenko means no Party of Regions, because he will not negotiate with the local councils. He will organise early local elections in Donbas.

Poroshenko thinks he will continue the anti-terrorist operation very actively to force the terrorists to be ready to go (without support of Putin they are ready now, and think Putin to be their betrayer) then he will allow the “corridor” for terrorists who “don’t have hands covered in blood”. Quite a tricky, though correct decision from the point of view of the need for a quick ceasefire. The problem is there (how to divide without court men with blood or without blood on hands? A suggestion would be that those who want to flee will be allowed to flee, criminals can escape. Difficult to accept by majority of the population, some additional PR campaign is needed. It is started already with the first speech of President. But surprise can happen as surprises happened with victory in first round of elections by Mr. Poroshenko. People voted for peace more than for him personally – it may also be OK again now – all people want peace and if some criminals escape and no more killings take place – that will be acceptable.

Poroshenko announces a unitary state as an indisputable fact. No federalisation. The problem will be with Putin, if something else is not already agreed before the 15 minutes talk on D-Day or earlier and telephone conversations. Putin needs that for his voters – to assure his supporters in Russia that he has achieved results in Ukraine. Russian as the second official language, which Putin demands is also not in the plans of Poroshenko. Can two presidents agree on that?

And also humanitarian issues – if the rebels do not leave but anti – terrorist action continues – the area needs to be freed of civilians through the establishment of a humanitarian corridor. Those are in all cities of the east. The president will face very strong campaign against him organised by Russia. If thousands have to leave for safety (they already leave in all directions – central Ukraine, Russia and Europe but in their hundreds, (there should be tens of thousands), Russians will say – we predicted a humanitarian catastrophe – now you see it.

Tough words about Crimea from Poroshenko. If Putin is tired enough with the sanctions of the G-7, Poroshenko could have had some agreements with him. Then despite the rhetoric that Crimea is Russian territory, Russia will give some status to Crimea – more independent but not to become Ukrainian sovereign part again.

Possibly during his inauguration speech it was mistake of Poroshenko to say “Crimea will be Ukrainian”. He should have said “I will do my best to ensure that Crimea will be Ukrainian again”, as there is no public support in Crimea to come back to Ukraine and legally, it will be a long process to bring it back, even if Putin agrees.

So we see a new charismatic Ukrainian hardliner in politics. Is it for better or worse? – we will see.

Then let’s have a look at economics. Immediate signing of the DCFTA – “my pen is in my hand” – he says. Poroshenko prays that DCFTA yields everything – democracy and wealth, which is definitely populist rhetoric.

Poroshenko was always for DCFTA with EU. He will sign it immediately if Putin does not create something new against him. I wonder whether any provocations can stop the decisiveness of EU to sign just on the edge. EU leaders are ready and willing and do not hesitate to sign in any circumstances.

What gives hope about DCFTA is that Russia lost the game for its own customs union with Kazakhstan and Belarus because the agreement is old fashioned – it is “exclusive” the possibility of countries to have other agreements on free trade with other unions is not possible at all.

The world already lives in “inclusive” free trade agreements. If Russia would allow Ukraine to have a Free Trade Agreement with the EU and Russia simultaneously, the EU would readily accept that and Russia would benefit from it.

Maybe Poroshenko knows something about Putin and Putin can agree on an “inclusive” DCFTA for Ukraine – then a compromise, a little bit later, which was expected from Poroshenko regarding Russia.

Ukraine has good chance of achieving long-term benefits from signing a Deep and comprehensive free trade agreement with EU. But short-term, Ukraine faces a total blockade of the supply of Ukrainian goods to Russia, which is a third of Ukrainian total exports. Added to the sharp devaluation of grivna from 8 USD to 12 USD cross-border trade by imported goods is stopped. Unemployment in the east is to rise significantly, to 30% locally.

There are no possible quick fixes, despite very significant support from IMF and EU – total expected aid of more than 35 bn USD.

Poroshenko mentioned that first and foremost, the nation needed peace, security and unity. The issue of territorial integrity of Ukraine is not to be discussed.

And he added that the war also provides colossal opportunities for European modernisation of Ukraine. Poroshenko wants to bring about Ukraine’s European choice to be the heart of national ideal(in fact the only one for a moment, there have been such attempts, they have not worked; let’s see if there is a new possibility, especially if providing it includes signing DCFTA). But it is good to hear at last about the quick implementation of a visa-free regime for Ukraine with the EU, starting from January 2015.

How to achieve the goals quickly and without a fight with society?

Two projects he says. He insists the actions of the president and government to call “projects” – quite attractive rhetoric – coming from management.

Second project, which was developed before the elections in collaboration with EU partners – to create new workplaces in the East of Ukraine, a project for the economic reconstruction of Donbas.

Yushchenko promised 5 mln jobs and that was not realistic. Even 500 thousand would be almost a miracle. Does Poroshenko have any agreement with the West to receive money for the long awaited closure of the mines and giving the people the opportunity to do something else, by educating them and helping them to find new places to live (central Ukraine)?

It is good start, in fact the only way to rise Kharkiv and not to allow higher unemployment and thus – unrest like in nearby Luhansk and Donetsk, is to start with state orders. “The army and its rearmament using the efforts of the Ukrainian military-industrial complex is our main priority”, he says.

The state orders to the military-industrial complex facilities will be to push for the re-industrialization of the economy he thinks. It is possible, but we have to cope with corruption first and to reorient military from Russia to EU – standards and compliance!

To achieve that, he wants to restore or to create national unity and to increase the prestige of the army, to keep it strong “Our best allies and best guarantees of peace are the army, the fleet, the National Guard and professional special services”

This process of state orders can be spread to the other regions and areas (aerospace, shipping, railway carriages). Will Poroshenko do that?

Poroshenko says there cannot be compromise with anyone in the issues of Crimea, European choice and state order (NO FEDERALISATION).

He also states that he will not go for more power – being dedicated to the idea of a parliamentary-presidential republic. But he announces full reboot. That means early Parliamentary elections.

Not only peace and unity of the country, but also the consolidation of all patriotic, pro-Ukrainian, pro-European powers. “We have to constantly remember the harsh lessons of the national liberation battles of the 17-20’s of the previous century. Back then, our politicians were unable to unite and counter aggression together. We have to draw conclusions not only from the century-old archives, but from the recent events as well”. We hope he tries to recall the Tymoshenko vs Yushchenko battle which totally destroyed the orange team 10 years ago and led to bloodshed in the country at the end. We must hope he remembers and tries not to repeat it in the communication with Yatseniuk. Let us hope.

Unfortunately there has been too little said about destroying corruption: the main problem of Ukraine. And he does not promise the same hardline behaviour as he promised to Putin on Crimea. He thinks national anti-corruption pact between the government and the people could help. Yes, but the quick and very strong actions, usually against former allies, with the help of European experts and practitioners like Saakashvily and Bendukidze are desperately needed throughout Ukraine. This is the chance to show to the east why the revolution of 2014 took place and for what. Then the result is possible. Maybe the President does not want to talk much but he will do much?