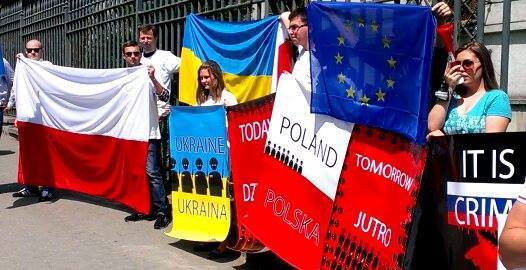 On the occasion of Russia’s Day, a reception was held at the embassy of the Russian Federation in Warsaw. The people who gathered there celebrated the proclamation of the declaration of Russia’s state independence of 12th June 1990.

Whilst more guests, waiting in a kilometre-long queue to enter the embassy at Belwederska Street, were arriving, a manifestation organised by the Foundation and EuroMaidan Warsaw was held on the opposite side of the street.

The protest was aimed at the people gathered there, who were expressing their passive consent to Russia’s aggression of Ukraine. The protesters were chanting at the guests “Shame on you!” and “Disgrace”, wishing to point out, amongst other things, the need for the West to take a common stance concerning Russia. The Poles and Ukrainians who live in Warsaw, speaking during the event, also appealed to introduce more sanctions and boycott diplomatic receptions organised by diplomatic missions of the Russian Federation.

The absence of solidarity with Ukraine was also pointed out by the Chair of the Foundation’s Council Bartosz Kramek, labelling the reception ‘an embarrassing spectacle’ and pointing out the ‘embarrassing the hypocrisy of the West’.