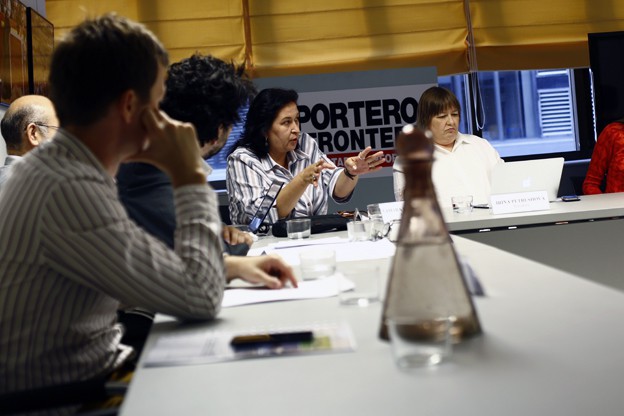 Madrid: Seminar on persecution of the media in Kazakhstan

On June 18 Madrid was the scene for a seminar organised by Reporters Without Borders and the Open Dialog Foundation on repressions against journalists in Kazakhstan. Among the speakers were ODF experts, and Kazakh lawyers, journalists and political activists. On the eve of the coronation of Spain’s new king, participants of the seminar expressed their hope that Spain would abandon its policy of supporting dictators and side with friends of democracy.

From the International Press Centre (Auditorio del Centro Internacional de Prensa), where the seminar took place, a clear message flowed out into the world: We will not accept leniency towards brutal persecution of the media in Kazakhstan. Economic interests of European states in this country do not relieve them of responsibility for tolerating the repressions of Nazarbayev’s regime. Journalists and analysts attending the seminar were particularly concerned with the geopolitical context surrounding the Ukrainian crisis and the formation of the Eurasian Union. The latter has forced independent journalists from Belarus, Russia and Kazakhstan into a new reality, where persecuted media can no longer find a safe haven in neighbouring countries.

The host of the seminar, Raphael Panadero of radio Cadena SER, spoke of the dilemma that the Spanish government is now facing in its relations with Kazakhstan. One the one hand, cooperation provides Spain with investment opportunities which might stimulate its economy. On the other hand, however, it gets Spain tangled up in dubious ethical decisions, such as attempts aimed at the unlawful extradition of the oppositionist Aleksandr Pavlov. So the question arises about priorities in this relationship: Is it economic diplomacy or human rights?

The essential part of the seminar began with a report by the Open Dialog Foundation entitled “Los medios independientes y de oposición en Kazajistán a punto de ser aniquilados”. Jędrzej Czerep, the foundation’s analyst, said that the regime seemed rather adept at selecting the strategies to battle its critics that bring the least harm to its image. This facade is quite easy to see beyond, however, it is readily upheld by president Nazarbayev’s European friends.

Tamara Simakhina, a defence lawyer for government-persecuted journalists, pointed out that recently the repressive legislation regulating activities of the media has been tightened even further. She pointed to certain paranoid moves made by the regime, who in its pursuit of the “joint media outlet Respublika”, strikes in other places that have nothing to do with opposition’s main medium. Irina Petrushova, editor-in-chief of Respublika, reminded the audience that the regime has been consistently de-licensing journalists. For many of them this is even more punishing than having to leave the country. She felt that persecuted journalists in Kazakhstan have no way to defend themselves and are left at the mercy of the regime. Some of them can only be saved through collective action of the international community. But for this to happen, the community must realise the true nature of post-Soviet authoritarian regimes, and recently this very realisation, especially in Spain, has been sorely lacking. However, there is a chance that the cut off of Russian gas to Ukraine, which will reverberate throughout Europe as well, will have a sobering effect. The social and political context was provided by Muratbek Ketebayev, a Kazakh dissident threatened with extradition from Poland to Kazakhstan on false terrorism charges, similar to those used against Alexandr Pavlov who is currently being held in Spain. Ketebayev pointed to the success of Russian propaganda in Kazakhstan: Recently a well-known Russian term – “enemy of the nation” – has found its way into this country and is used to describe anyone who stands against the governmental line. It stigmatises and exposes journalists who are critical of the current regime. – Europe must remember that the Eurasian Union that is being created by Moscow is not only an economic alliance but most of all an alliance of dictators whose policies are becoming more and more repressive – said Ketebayev, – When Europe shows instrumental support for Nazarbayev, Putin or Lukashenko, it agrees to play by dictators’ rules and thus legitimises their power.