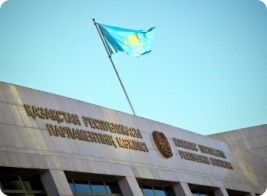 The City Prosecutor’s Office held a meeting with long-term members of the Election Observation Mission: Andrew McEntee and Elgun Tagiev. The deputy prosecutor of Almaty, Zhandos Umiraliev conveyed information about the order  relating to the receipt of complaints regarding voting irregularities filed by members of election commissions, citizens as well as representatives of registered public associations. He also advised on the establishment of the Prosecutor’s Office working group which is going to oversee the application of election legislation, the cooperation with the city election commission, law enforcement agencies and courts.

Three candidates for members of the Taldykorgan city maslikhat:Baniamin Faizulin, Mikhail Pak and Alfred Malinovskiy did not start their election agitation and thus, they fell out of the race. It is a sign of protest against the tragic events in Zhanaozen; their absence is also explained by the lack of time available for campaigning due to these occurrences. Also, candidates for membership of the Almaty city maslikhat: Sergey Utkin, Marianna Gurina and Bakhyt Tumenova put forward their demands to postpone the date of the election. Their refusal to run the race by is motivated by the necessity to carry out a fair investigation into the events in Zhanaozen and punish the perpetrators.

The Central Election Commission cancelled registration of the list of the “Rukhaniyat” party candidates who are running for election for the Majilis. The registration was cancelled due to results of audits conducted by the General Prosecutor’s Office upon receipt of a complaint filed by Zhaganova Altynshash in which she accused the “Rukhaniyat” party of violation of the order of nomination of the party candidates under Article 89, paragraph 6, subparagraph 4 of the Constitutional Law “On Elections”. The Deputy General Prosecutor Andrei Kravchenko stated that according to minutes from the party conference of the South-Kazakhstan regional branch of the “Rukhaniyat” party held on November 29, the conference was attended by 26 members of the. Meanwhile, 13 people out of 26 deny not only  participating in the conference, but also their membership in the “Rukhaniyat” party, and five of them declared their membership to the “Adilet” party. Also, according to Andrei Kravchenko, the number of party members gathered at the meeting of the Republican committee was not sufficient to form any binding decisions. – The minutes confirm the participation of 19 people, their full names are indicated in the document, but the audit showed that two persons out of 19 are not members of the Republican Party Committee. Participation in the meeting of the Republican Committee was also denied in writing by a further three persons.

The CEC registered 9 candidates for membership of the Majilis of the Parliament, elected by the People’s Assembly of Kazakhstan and it accredited international observers. The registered candidates have the right to begin campaigning on January 1, 2012. On the same day, according to the information announced by the Ministry of Foreign Affairs of the Republic of Kazakhstan, the Central Election Commission accredited 82 international observers. 27 of them are the representatives of the Observer Mission from the OSCE/ODIHR, 31 were delegated from the CIS Observer Mission and another 4 persons – from the Organisation of Islamic Cooperation. Another 20 persons are observers from other foreign states. According to recent data, the CEC accredited 326 international observers.

The official representative of the General Prosecutor, Nurdaulet Suindikov conveyed information about the investigation into the events in Zhanaozen. The number of those people arrested on suspicion of involvement in the riots in Zhanaozen increased to 18; previously sixteen were reported. He also stated that police officers may be sentenced to up to ten years’ imprisonment if the court finds their use of lethal weapons illegitimate during the suppression of riots in Zhanaozen (under Article 308, part 4 of the Criminal Code of Kazakhstan, which includes responsibility for the abuse of power and competence regarding the use of weapons or extreme equipment). However, the representative of the General Prosecutor’s Office concluded that the fatalities: “cannot be directly attributed to the actions taken by the police officers”.

A regular meeting of the members of the Public Committee for Investigation into the tragic events in Zhanaozen of 16th December was held. Participants of the Committee meeting criticised the decision of the authorities to extend the term of the state of emergency until 31st January, and they highlighted the need to provide legal and humanitarian aid to the Zhanaozen inhabitants and to grant public access to the investigation process.

The international public organization “Penal Reform International” (PRI) and public monitoring committees (PMC) of a number of provinces of Kazakhstan issued a press release in which they stated that no cases of torture in detention centres of Zhanaozen and Aktau were discovered. According to the PRI, only 12 people, accused under Art. 241 Part 2 (participation in mass disorders) of the Criminal Code of Kazakhstan currently remain in the temporary detention facility of the Municipal Department of the Interior in Zhanaozen, and another 14 people – in the Aktau detention facility of the correctional system of the Ministry of Interior.

The head of the state approved the Law: “On amnesty in connection with the twentieth anniversary of independence of the Republic of Kazakhstan.” The law provides for abolition of the criminal responsibility for, and punishment of, a number of categories of persons who have committed crimes of minor to moderate gravitas.

On New Year’s night, 25 residents of Zhanaozen were detained for violation of the curfew. According to the press service of the akimat of the Mangistau Province, activities connected with domestic garbage removal and restoration of the city are now being carried out. On the 1st January, 96 people and 23 units of special equipment were employed to carry out the clean-up operation in the city; 1154 tons of refuse has been removed. As of the 1st January, two police control stations located in the ‘Koktem’ district have been fully restored; construction of a third control station in the “Arman” shopping centre is 95 percent completed. Also, reconstruction of the “OzenMunayGaz” office building in the city is currently underway. At present, 20 people are engaged in the dismantling of the damaged interior decoration.

The Common Economic Area (CEA) which unites Russia, Belarus and Kazakhstan, began its operation on 1st January, 2012. The documents which put in force the principles of the free movement of goods, capital and labor in the EEA from the New Year, were signed by the Presidents of the three countries: Dmitry Medvedev, Alexander Lukashenko and Nursultan Nazarbayev in December 2011.