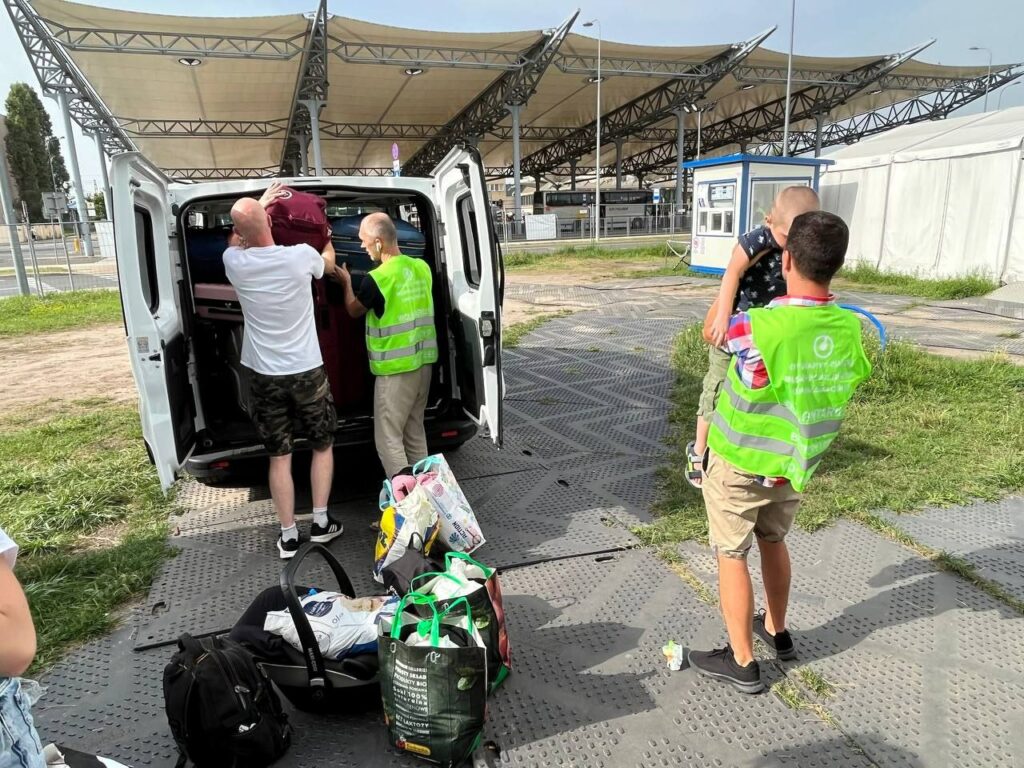 Stories flowing with tears. Tales of refugees from Ukraine

Volunteers and staff from the Open Dialogue Foundation meet dozens of people every day who are fleeing the hell of war and their stories. The war in Ukraine continues, and in search of shelter, safety and a chance of survival for themselves and their loved ones, our guests decide to embark on a gruelling and dangerous journey of several days, under a hail of bullets, with numerous roadblocks by the occupying forces along the way, where any such situation could become tragic in its consequences. There are almost always tears at the end of this journey, and they are triggered by all kinds of emotions:

Kseniya, Mariya, Maxym, Dmytro, Nadiya – these are just some of the children who were born in Poland while their mothers were in the care of the Foundation. The tears of joy of the proud parents are understandable – although often the fathers could only see their children through a smartphone. But this joy is shared by all the new aunts and uncles (volunteers) who take part in arranging blankets, supporting them during their stay in hospital and even rocking them to sleep. All “our” children grow up healthy, being the pride and hope of their parents.

Valentyna and Lyudmyla, sisters from Severodonetsk, arrived happily in Poland thanks to the cooperation of a volunteer from Ukraine who told us their story and helped organise their trip to Warsaw. Valentyna, fleeing the shelling of the city, fell and broke her leg. And then she hid in a bunker for almost a month without access to medical care, losing faith in her recovery and fearing for her life.

They arrived in Poland with only what they were wearing.

The two women spent a month in a flat provided for them by our Foundation. After listening to their story, we immediately decided to help them and fill their fridge and pantry. Volunteer Olya bought them their first clothes and helped collect more. After weeks of uncertainty about tomorrow, the women finally had a secure roof over their heads.

After numerous visits to the doctor, tests, x-rays, treatment and two weeks of rehabilitation, Valentyna has largely regained the use of her leg. She still has a lot of effort and dedication to do in order to return to full fitness. Hope has turned into reality and there is no denying that the main source of hope for Valentyna has been and still is the great love and care of her sister Lyudmyla, who never leaves her and makes sure she never lacks anything.

“Mummy, will they shoot at our house here too?” – asked 4-year-old Bogdanek, terrified of his new, unfamiliar surroundings and clutching his parents’ hands tightly right outside the tent that is the reception centre for Ukrainian refugees. When you hear such words coming out of the mouth of a small, vulnerable child, they just shatter the silver lining.

After several conversations with a psychologist, they were placed in safe conditions in a flat provided by our Foundation, where the whole family quickly recovered. Dad Maksim, with the support of a volunteer, quickly found a job. Today the family is already living in their own rented flat, Bogdan is no different from the other children in the kindergarten and is full of age-appropriate energy, and thanks to the fact that he has integrated very well with the other children and loves kindergarten, his mother was able to get a job.

There are also stories that make us brutally realise that, despite our best intentions, not everything can be done. For a long time, we supported Zoya in her battle with cancer, who bravely endured the illness and the difficult treatment process and never gave any indication that anything was wrong with her. Independent, confident, proud. A woman of real class.

During a recent visit to the hospital on an August afternoon, we were able to videotape a conversation between Zoya and her daughter, who was unable to visit her mother from abroad. Tears flowed from the eyes not only of the mother and daughter but also of the volunteers who kept Zoya’s spirits up until the very end. Although none of them said it out loud, they all knew it was goodbye. Two days later, Zoya passed away.

We come across many such stories every day. With your help, we are able to do more to make them end happily. Support our efforts at zrzutka.pl/DomMam.