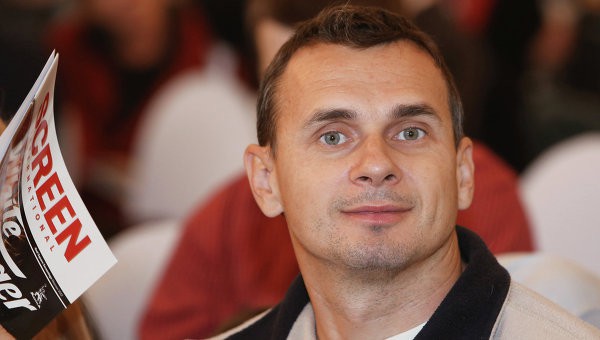 The case of Oleg Sentsov: Russian FSB tortured pro-Ukrainian activists from the Crimea into confession

3 July 2014 | Author: Editorial office
Table of contents:
The use of torture on the detaineesUkraine demands the release of its citizensPublic reaction

Federal Security Service of the Russian Federation in the Crimea detained and arrested four citizens of Ukraine on suspicion of plotting terrorist attacks in the occupied peninsula. In order to obtain confessions, they used torture against the detainees. The main suspect is famous Ukrainian filmmaker and the EuroMaidan activist, Oleg Sentsov, who held an active pro-Ukrainian position in Crimea, occupied by the Russian authorities.

In May 2014, in Simferopol (AR Crimea, Ukraine), the Federal Security Service of the Russian Federation (Russian FSB) detained four citizens of Ukraine:

All four were arrested in Simferopol and transferred to the building of the Security Service of Ukraine (now the Russian FSB), at 13 Boulevard Franko. Since the day of detention, their relatives and counsels have not been able to obtain any information regarding them. It was only on 26 May, 2014, that they became aware that the EuroMaidan activists had been kidnapped by workers of the Russian FSB from the Crimea and are being remanded in the ‘Lefortovo’ detention centre in Moscow. According to Sentsov’s counsel, Dmitriy Dinze, holding Sentsov, Kolchenko, Afanasyev and Chirniy in custody in the FSB building in the Crimea was illegal, also because none of the detainees was presented any charges. It wasn’t until the four activists were transferred to Moscow that they faced accusations.

Criminal cases were instituted with regard to the detainees under Article 205, section 2 (‘commitment of a terrorist act’), Article 205.4, section 2 (‘establishment of a terrorist organisation) and Art. 222, section 3 (‘illicit trafficking in arms’) of the Criminal Code of the Russian Federation. Art. 205, section 2 of the Criminal Code provides that the term of imprisonment shall be not less than ten years nor more than twenty years. Charges against all four detainees consist in the fact that they, allegedly, being members of a terrorist organisation, were preparing to commit terrorist attacks: explosions of improvised explosive devices near the ‘Eternal Flame Memorial’ and the monument of V. Lenin in Simferopol on the night of 9 May, 2014, as well as the arson of the building of the public organisation ‘Russian Community of Crimea’ and the representative office of the party ‘Yedinaya Rossiya’ [‘United Russia’] in Simferopol between 14-18 April, 2014.

Information on the case of the detainees has been publicised only in parts through the media and online. For example, the letter of the Deputy General Prosecutor of the Russian Federation of 17 June, 2014, contains a statement that in relation to Oleg Sentsov and Alexey Kolchenko “three criminal cases were instituted and joined in one proceeding with regard to the activities of the terrorist organisation, whose participants committed two terrorist act in Simferopol as well as were plotting a terrorist attack, which has not been not followed through due to circumstances beyond their control”.

Oleg Sentsov’s counsel is Dmitriy Dinze, famous for his defense of ‘Pussy Riot’, ‘detainees from Bolotnaya Square’ as well as environmentalist and left-wing activist Alexey Gaskarov. Alexander Kolchenko’s counsel is Svetlana Sidorkina. Russian FSB forced the counsels to sign a non-disclosure statement regarding the case file. Members of the Moscow Civil Observation Commission, Dilar Tasbulatov and Zoya Svetova, who managed to visit the prisoners on 29 May, 2014, were compelled to sign a statement, similar in content. In this regard, the names of investigators, running the case, or representatives of the prosecution, are not known. Nevertheless, on 24 June, 2014, during the live broadcast of the ‘Dozhd’ [‘Rain’] channel, it was stated that this case is being run by Mikhail Savitskiy, FSB colonel, the head of the 3rd Division of the Investigation Department of the Russian FSB. He is also famous for having run the case of the attempted assassination of Ramzan Kadyrov.

According to the media reports, Alexey Chirniy and Gennadiy Afanasyev, having been subjected to torture and pressure, denied the support of independent counsels and are cooperating with the investigation; they will be provided with legal assistance by the state.

The use of torture on the detainees

The evidence base in the case regarding the plotting of terrorist attacks in Crimea is based on confessions made by Kolchenko, Afanasyev and Chirniy (Oleg Sentsov refused to acknowledge his guilt); hoewever, there is reason to believe that the testimonies were obtained through torture.
Such conclusions can be drawn from the fact that torture was used against Oleg Sentsov. According to counsel Dmitriy Dinze, his client was tortured: his head was covered with a plastic bag, and he was strangled to the point of unconsciousness; he was threatened with rape and murder; at the same time, he was compelled to confess to the preparation of bombings, arson, possession of weapons and explosives.

Oleg Sentsov’s counsel filed a complaint with the Investigative Committee of the Russian Federation, in which he pointed out that his client had been beaten and threatened in the directorate of the Russian FSB in the Crimea. The defender demands that a criminal case be initiated with regard to causing physical harm to Oleg Sentsov.

The official representative of the Federal Penitentiary Service of the Russian Federation, Kristina Belousova, denied any pressure on the Ukrainian prisoners.

It should be noted that relatives of those arrested were also subjected to mental pressure on the part of the self-appointed Crimean authorities. In the first weeks of the arrest, attempts were undertaken to deprive Oleg Sentsov of his parental rights: Oleg’s relatives were summoned to the Department of Juvenile Justice. He has two children, one of whom is disabled with a diagnosis of ‘infantile autism’.

Ukraine demands the release of its citizens

The Ukrainian side considers the accusations regarding the allegedly prepared terrorist attacks in the Crimea and participation of Ukrainian citizens in their orchestration as “absurd, groundless and legally unfounded”.

Furthermore, in accordance with the provisions of the Consular Convention between Ukraine and the Russian Federation, the Embassy of Ukraine in Moscow formally requested that an emergency meeting of a consular officer of the Embassy with the detained citizens of Ukraine be permitted.
According to the information from the media which was released on 26 May, 2014, in response to the appeal of the Ukrainian side, Russia’s Foreign Minister officially announced that Oleg Sentsov and two other Ukrainian citizens had been detained as suspects in crimes related to terrorist activities.

On 30 May, 2014, Temporary Chargé d’Affaires of Ukraine in Russia again appealed to the Russian side, demanding that the opportunity for the consular officer of the Embassy of Ukraine to visit the detainees be granted immediately. The Moscow authorities, however, have not permitted the Ukrainian consul to visit the Ukrainian political prisoners, citing the fact that the detainees are “citizens of the Russian Federation” and are not entitled to use the assistance of the Ukrainian consul.

On 3 June, 2014, Ukraine’s Foreign Ministry handed a note to the Temporary Charge d’Affairs of Russia in Ukraine with a demand that a meeting with the detained Ukrainians be permitted immediately.

The Ukrainian side insists that all the detainees are citizens of Ukraine; therefore, Ukrainian diplomats have the right to visit the detainees. In turn, the Russian side considers the detainees Russian citizens and therefore has not given permission for the meeting with Ukrainian diplomats. And so, the Russian FSB explains its actions in the following commentary: “The deadline, within which passports were issued to Ukrainian citizens and stateless persons, permanently residing, on the date of the annexation of the Crimea and Sevastopol (the city of federal significance) by the Russian Federation, on the territory of the said subjects, has passed. The grounds for this statement is the Federal Constitutional Law of 21 March, 2014, No. 6-FKZ ‘’On the Acceptance of the Republic of Crimea into the Russian Federation and the Creation of New Federal Subjects – the Republic of Crimea and the City of Federal Significance Sevastopol’.

On 20 June, 2014, Ukraine’s General Prosecutor’s Office stated that all attempts, undertaken by the competent authorities of Ukraine to establish communication with their citizens, as well as attempts to provide them with a full scope of their consular services, enshrined in international conventions, have been ignored by the relevant authorities of the Russian Federation’.

On 24 June, 2014, the Minister of Foreign Affairs of Ukraine, Pavlo Klimkin, requested that the OSCE Chairman, Didier Burkhalter assist in the release from custody of Ukrainian filmmaker Oleg Sentsov and other Ukrainian citizens who had been detained in the Crimea, and accused of terrorist activities.

Representatives of the Ministry of Foreign Affairs of Ukraine (the case of Oleg Sentsov is monitored by the Ukrainian Foreign Ministry employee, Lyubov Abravitova) emphasise that the Russian penitentiary services violate all international agreements and principles, as well as blatantly violate human rights and freedoms.

The detention and arresting of the famous Ukrainian film director sparked outrage among Ukrainian and world community.

On 28 May, 2014, representatives of the National Union of Cinematographers of Ukraine, representatives of the AutoMaidan (Sentsov was one of the participants of the movement), and other emphatic citizens met near the walls of the Presidential Administration in Kiev and issued an appeal to the current Ukrainian authorities, demanding that all possible efforts and steps be taken in order to expedite the release of Oleg Sentsov.

The Open Dialog Foundation believes that the criminal cases against the citizens of Ukraine are completely fabricated and constitute an illustrative example of persecution of pro-Ukrainian activists in the Crimea, occupied by the Russian troops. The main reason for oppression of the activists is their determined position in support of the territorial integrity of Ukraine.
We hereby urge the Russian authorities to immediately release the citizens of Ukraine: Oleg Sentsov, Alexander Kolchenko, Gennadiy Afanasyev and Alexey Chirniy, who were wrongly accused of preparing terrorist acts.

We hereby call on: