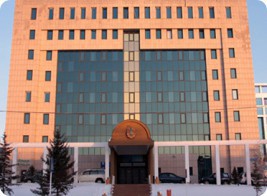 Askhat Daulbaev, the General Prosecutor of the Republic of Kazakhstan, met with Evgeniy Sloboda, the Head of Headquarters of the CIS observation mission which is going to carry out  an observation of the early elections for membership of the maslikhats. The meeting was devoted to the legality of the election process, the work done by the Prosecutor’s Office with regard to the control of the legality of actions undertaken during the electoral period as well as  a review of complaints connected with violations of election law and the measures taken in order to address them.

Elections in Zhanaozen will be held at the scheduled time, despite the fact that during the week a decision was made to cancel it due to the state of emergency. According to the decision of the 6th January, the holding of an election in the city of Zhanaozen was determined to be in violation of the law relating to the declaration of the state of emergency, but on the 11th of January, The Constitutional Council could not overcome the presidential veto on the issue of the cancellation of  the election in Zhanaozen due to the intervening actions carried out in the city, thus, the election will be held at the scheduled time.

An extraordinary congress of the “Rukhaniyat” party decided to remove Serikzhan Mambetalin from their ranks. The post of president was given back to Altynshash Dzhaganova, who had been the leader of the “Rukhaniyat” until the 16th March, 2010, when Serikzhan Mambetalin was elected chairman during the VII Congress of the Party. Let us remind ourselves that as a result of a breach of the order of nomination and registration of party candidates, non-compliance with the order of convocation and of the holding of the Congress with the regulations stipulated in the law ‘On political parties’ and with the charter of the party, as well as in connection with other violations of law, on the 28th December, 2011 the Central Election Commission decided to cancel the registration of the “’Rukhiynat” party’s list of candidates.

The Central Election Commission adopted a resolution to permit  the broadcast of televised debates between the political parties which are due to run in the election for membership of the Majilis of the Parlament. Also, the Commission implemented  rules relating to the debates. The debates, which are going to take place on the 12th of January, will be broadcast on the republican TV channel ‘Khabar’. In a case where a representative of a political party elects not  to participate in the debate, the airtime reserved for this party will be divided equally amongst the remaining participants.

A number of candidates for membership of the maslikhats and the Majilis of the Parlament in Kazkhstan were refused registration.

The Central Election Commission made a decision to exclude those candidates from membership of the Majilis of the Parliament registered party lists,  these candidates were found to have discrepancies between the information they set out in their declarations and the data stored by the tax authorities.

According to paragraph 2 of Article 89 of the Election Law, a candidate for membership of the Majilis of the Parliament and his wife (husband) is obliged to submit a declaration of income and property to the tax authorities at his/her place of residence prior to the day of registration. Reliability of information included in them is verified by the tax authorities within 15 days from the date of registration of the party list. In such a case where  false data relating to income and property is discovered, the CEC makes a decision to exclude the person from the party list. The law does not impose any quantitative criteria relating to the amount of money  or the value of undeclared movable and immovable property.

Thus, according to the information provided by the CEC and the website Guljan.org, among the excluded candidates are four representatives of the ‘Nur Otan and ‘Adilet’ party, five respresentatives of the party ‘Ak Zhol’, six nominees from the ANSDP (among them is the co-chairman of the ANSDP, Bulat Abilov and the journalist Gulzhan Yergaliyeva), two are from the party ‘Auyl’, and one is from the Patriot Party of Kazakhstan.

Also, according to the web portal sailau.crowdmap.com, which provides coverage of the election process, in Atyrau, registrations  of the following candidates were cancelled: Maks Bokaev, the Chairman of the NGO ‘Arlan’ (‘Courage) and the lawyer Asel Nurgaziyeva who is the head of the social organisation ‘Zaman’ (‘The Epoch’). According to Bokaev, after the events of the 16th of December in Zhanaozen (a city of regional subordination in the Mangistau Province of Kazakhstan), he urged the citizens, via the Internet, to gather in the city center and to sign a petition addressed to the head of the state and the heads of international organisations. Asel Nurgaziyeva, on the 22nd of December, suggested  honouring the memory of the dead in the Park of Victory.

In the city of Aktau (the central city of the Mangistau Province) as of the 10th of January, 2012 only 42 out of the 80 candidates for membership of the maslikhats are still due to participate in the election race. On the 9th of January, ex-candidates gathered at the hearings organised by the public association ‘The Center for Civil Initiatives ‘Mangistau’, during which they discussed the illegal (in their opinion) cancellation of candidatures from the election process by the City Election Commission.

On the 4th of January, information was disseminated  about the exclusion of 85 candidates for membership of the maslikhat, in the city of Almaty, from the election race. Among them was the culture activist and singer Shokan Maratuly.

On the 10th of January, the Municipal Election Commission of the city of Uralsk made a decision to cancel the registration of 12 candidates. Among them were the candidates of the ANSDP party, “Adilet”, “Ak Zhol” as well as self-nominated candiates.

In most cases, deregistration of candidates for the maslikhats is executed in accordance with paragraph 6 of Article 104 of the Constitutional Law of the Republic of Kazakhstan ‘On Elections in the Republic of Kazakhstan’, which stipulates that the district election commission is obliged to cancel the decision on registration of a candidate in case of the revelation of any falsified  information contained in the declaration of income and property, submitted by the candidate or his/her  spouse in accordance with anti-corruption laws of the Republic of Kazakhstan , at the time of its submission. Applicants who disagree with the decision of the Election Commission have the right to file an appeal against. Thus, under paragraph 7 of Article 106 of the Law ‘On elections in the Republic of Kazakhstan’, “a territorial election commission or court shall issue a decision on the appeal within seven days of the date of filing.” It should be noted that the election is scheduled for the 15th of January, 2012.

The opposition public activist Ayzhangul Amirova was apprehended by law enforcement agencies at the time of her arrival at the airport. She was charged with committing a deed under Article 164 of the Criminal Code. i.e. ‘inciting social discord’. Previously, Natalia Sokolova, the lawyer of the striking oil workers of the Mangistau Province, had been sentenced to 6 years’ imprisonment under the same article.  Ayzhangul Amirova had been campaigning on behalf of the striking oil workers for seven months, and on behalf of “The People’s Front”: she provided them with humanitarian and legal support. She also contributed to the dissemination of information on peaceful protest, found lawyers for the detained strikers and supported their families.

The President of Kazakhstan, Nursultan Nazarbaev enacted the Law ‘On national security of Kazakhstan’. The law determines the competencies of state bodies and public officers in the sphere of national security as well as the legal basis for the organisation of their activities. Earlier, the opposition movement: “The People’s Front” issued a statement in which included an opinion that in the case of the adoption of the law in its original form, dissemination of objective information may be regarded as having negative impact on people who violate the national interests of Kazakhstan.

The leaders of the republican mass-media adopted the Mass-Media Charter for a Fair Election Coverage. The rules adopted by the Charter are, among others; to clearly distinguish between the activity of public officers and the candidates for election campaigning, political parties, to make a clear distinction between propaganda publications and informational messages, and to promote equal access to them for all registered parties as well as all candidates for membership of the maslikhats, regardless of their political ideologies.

On the 6th of January, a former editor of the Kazakh newspaper ‘Alma-Ata Info’, Ramazan Esergepov was released from the correctional facility UZ 158 / 2, Zhambyl Province. After his release, he laid flowers in memory of those killed in Zhanaozen. On the 9th of January, Esergepov accepted the offer to become the head of the Foundation ‘Journalists in Distress’.  Let us remind ourselves that on the 8th of August, 2009, the Taraz court sentenced Ramazan Esergepov to three years’ imprisonment, to be served in a correctional facility, depriving him of the right to engage in publishing and journalism for a period of two years. The reason for the arrest and the investigation was an article published in the ‘Alma-Ata Info’ on the 21st of November, 2008, entitled ‘Who controls our country: the president or NSC?’ In the article, a management letter written by the head of the NSC department of the Dzhambul Province of Kazakhstan was quoted.

The Kazakh intellectuals discussed the tasks connected with the tragic events of the 16th of December in Zhanaozen, the Mangistau Province. As a result of the conference, they decided to issue a letter to the President, Nursultan Nazarbaev, with a demand to identify and punish the real perpetrators of the tragedy in Zhanaozen. Tey also elected a council of 11 persons from the Kazakh intelligentsia. The council includes the poet Mukhtar Shakhanov, and writers Kabdesh Zhumadilov, Temirkhan Medetbek and Mereke Kulkenov, in addition to a film director: Bolat Atabaev, a journalist: Rysbek Sarsenbai, and opposition politicians Mukhtar Tayzhan, Serik Sapargaliyev, Tolegen Zhukeyev, Marzhan Aspandiyarova and Dos Koshim.

In Kazakhstan, there is a shortage of aviation fuel. The Press Service of the Ministry of Transport and Communications issued a statement, according to which, as of the 6th of January, the amount of fuel stored at the airports is 30 700 tons, of this, ‘Air Astana’ has 7,4 thousand tonnes, and the ‘SCAT’ airlines have 96 tonnes.