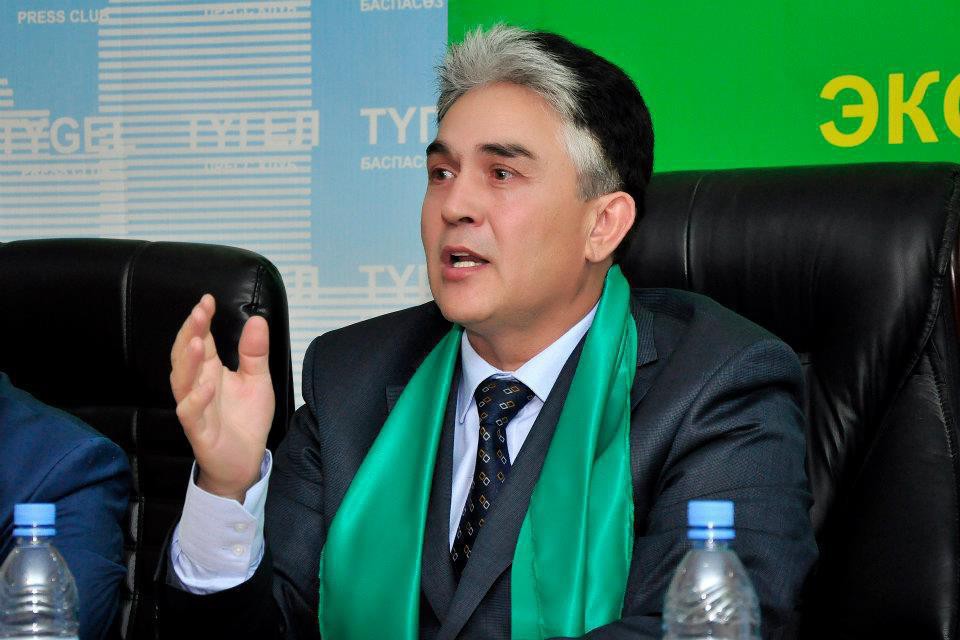 Kazakhstan: Head of anti-corruption organisation convicted in a defamation case

The president of a Kazakh foundation “National Anti-corruption Committee”, Musagali Duambekov, has been sentenced to one year of imprisonment for “defamation” after the publication of a series of journalistic investigations. Despite demands from the international community, Kazakh authorities have refused to decriminalise defamation. Currently, punishment for this crime is even more severe, while repressions against journalists and civil rights activists for “defamation” have intensified. 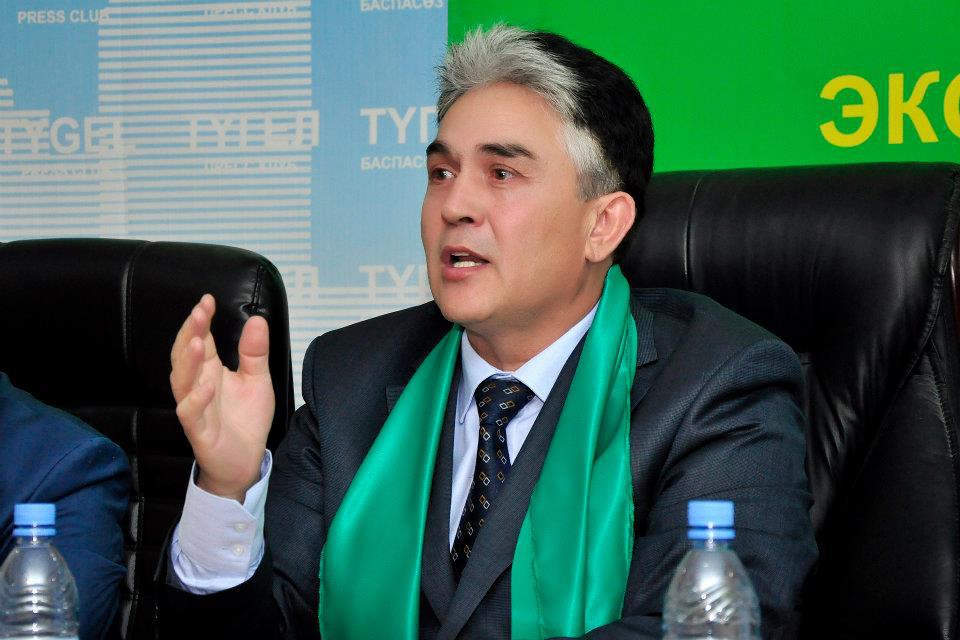 Musagali Duambekov is a Kazakh politician and social activist. Since 2005, he has been the president of the republican environmental party “My Kazakhstan”. In 2011 he joined the presidential race. Later, he said that he had not attempted to take first place and had been supporting Nursultan Nazarbaev’s policies. Consequently he withdrew from the race. Since 2012, Duambekov has been the president of a social foundation “National Anti-corruption Committee”.

Early in 2014, Musagali Duambekov published a series of investigative journalism articles, where he accused the Mukashev family of businessmen of illegal business dealings and of forcible assertion of rights, violence and torture against an Astana inhabitant, Alibek Iskakov. On May 13, 2014 the Almaty District Court № 2 of the city of Astana, presided over by judge Asem Ramazanova, sentenced Musagali Duambek to one year of imprisonment on defamation charges (article 129 of the Criminal Code of Kazakhstan). For a year, Duambek will not be able to leave Astana without permission from the authorities, which will be a great impediment to his work. The court also ordered him to retract his accusations against the Mukashev family. On July 11 2014 the court of appeal sustained Duambekov’s sentence. The civil activist will be appealing to the court of cassation.

Due to the stress caused by these circumstances, Duambekov has started to experience health problems. He has been diagnosed with neurodermatitis and a stomach ulcer. Duambekov asked the appellate judge to reschedule the hearing in order to accommodate his much needed stomach surgery. The judge, however, rejected his request.

On August 16, 2013, during a briefing at the National Anti-corruption Committee Musagali Duambekov, together with fellow-activists talked about the violation of labour rights of employees of “Astana Dar-Stroy” brickworks. According to Duambekov’s words, the facility operated in the village of Akmol, near Astana, between the years 2008 and 2011 and its operations were illegal, because of the following:

Despite the above-mentioned violations, the company worked on a number of construction projects, including social services procurement of government buildings. Members of the National Anti-corruption Committee announced that the manager of this illegally operated facility, Aygul Mukasheva, refused to pay her employees for three years.

The civil rights activist, Musagali Duambekov was attempting to defend the rights of one of the brickworks’ employees, Alibek Iskakov, and his father, Ersen Iskakov. Below we cite the main results of Duambekov’s investigation, which later served as a basis for his criminal trial and liability for “defamation”:

Journalists and activists threatened with jail time for doing their job

Article 129 of the Criminal Code of Kazakhstan defines “defamation” as “intentional dissemination of false information that serves to discredit the integrity and dignity of another person or tarnish their reputation”. According to the International Foundation for Protection of Freedom of Speech “Adil Soz”, in the case of Musagali Duambekov we are not dealing with intentional or predetermined lies, since when Duambekov published his information, he provided sources as well. Specifically, Duambekov founded his investigation  on the following sources:

Musagali Duambekov refuses to admit he is guilty of defamation. He told us that he was ready to retract some of his words about enslavement, abduction and battery as “strong literary expressions”. Duambekov offered this as gesture of reconciliation, however, the Mukashev family rejected it. The civil activist thinks that the court trial has proven the veracity of the facts he published.

Also in his conversation with the Open Dialog Foundation Musagali Duambekov asserted his suspicion that the criminal proceedings against him might have been orchestrated because of his work as a civil activist and fighter against corruption. According to his words, the case might have been ordered by the prosecutor’s office as Talgat Mukashev, the brother of the brickworks manager, Aygul Mukasheva, is a prosecutor with the special environmental unit of the Karaganda district. Apart from that, Duambekov has also announced that the Mukashev family tried to “intimidate” the Iskakov family a number of times, using the names of their friends – influential officials.

International and Kazakh human rights organisations (Human Rights Watch, Article 19, Adil Soz, Kazakhstan International Bureau for Human Rights of and others) have expressed their criticism of the defamation article in Kazakhstan’s criminal code and the introduction of an even stricter punishment many times. On July 3, 2014, President Nazarbayev signed the new Criminal Code. This new code, along with up to 3 years of imprisonment, also introduced higher fines for defamation (up to EUR 17900). According to human rights organisations, there are 20 to 30 court cases each year concerning defamation charges. Just in the period between 2001 and 2012, the International Foundation for Protection of Freedom of Speech “Adil Soz” recorded 65 criminal proceedings on defamation charges, 16 out of which ended with conviction, out of those, 3 resulted in sentences of imprisonment.

Additionally, the Kazakh prosecutor’s office supported the introduction of a “dissemination of hearsay” article into the new Criminal Code, liability under which may lead to a sentence of up to 12 years’ imprisonment. The new article will be applied “when false rumours are spread, resulting in a violation of social order and security”. The authorities are also suggesting that persons who “cause property damage as a result of dissemination of false information even if there is no evidence of theft” should be brought to criminal liability These norms are dangerous to all journalists and civil activists who conduct investigations that are critical of the authorities, especially relating to corruption.

In january 2014, a coalition of Kazakhstan’s NGOs, “Article 20”, proposed that the defamation article should be removed from the Criminal Code. The idea of criminal liability for defamation contravenes OSCE and UN standards, as well as Article 19 of the International Covenant on Civil and Political Rights. Kazakh civil rights organisations say that defamation suits should be tried within the framework of the Civil Code.

The Open Dialog Foundation urges the authorities of Kazakhstan to assure impartiality in the case of Duambekov’s cassation appeal, and also to establish the legitimacy of his initial conviction. The Open Dialog Foundation is appealing to the Kazakh authorities to provide for an  impartial hearing of Musagali Duambekov’s appeal against the court’s guilty verdict in his defamation case, and to establish the legitimacy of his conviction. We think it is necessary to thoroughly verify Duambekov’s claims concerning the business operations led by the Mukashev family, which could be linked to corruption schemes. It is in the best interest of Kazakhstan to promote civil anti-corruption initiatives, notions of the society’s control over authorities and respect for the law.

We are appealing to competent authorities of the Republic of Kazakhstan to support and insist on meeting the demands to cease pressure and persecution against journalists and civil activists; to guarantee them the right to their profession, the right to freedom of expression and dissemination of information in accordance with the International Covenant on Civil and Political Rights, OSCE Universal Declaration of Human Rights and human dimension commitments.

We are also urging governments of democratic states to pay attention to Kazakhstan’s non-compliance with recommendations included in the Universal Periodic Review and to demand from Kazakhstan’s authorities theactual implementation of international commitments, especially the commitment to review the criminalisation of defamation.

You can support our appeals and send your inquiries to: