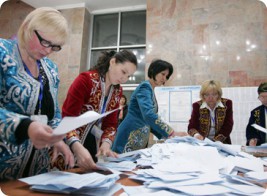 The Ministry of External Affairs of Kazakhstan refused to issue visas to 18 observers from Poland who were planning to fly to Kazakhstan for the election on the 15th of January. Among them were renowned Polish journalists, experts on Eastern countries: Maria Przełomiec and Michał Potocki, as well as Piotr Borys, a member of the European Parliament.

The period of the election campaign in Kazakhstan is now over. According to Article 32 of the Constitutional Law ‘On elections in the Republic of Kazakhstan”, on the day of the election ( 15th January 2012) as well as on the day prior (the 14th January, 2012) no pre-election agitation is permitted.

U.S. Secretary of State Hillary Clinton conducted a telephone conversation with the Minister of External Affairs of Kazakhstan, Erzhan Kazykhanov. According to the statement issued by the MEA of Kazakhstan, Kazykhanov assured Mrs. Clinton that the coming election “is destined to become an important step forward on the way of democratic progress and to contribute to further consistent and sustainable socio-economic development of the country”.

The city has been subjected to increased security measures including more stringent checks at roadblocks. Pupils of the afternoon period of the schools in the city of Zhanaozen where polling stations were located were sent home after the second lesson of the day.

During the election period, more than 350 election law violations were registered on the law violation map, created by the ‘Saylau’ Social Observation Coalition. The official representative of the General Prosecutor’s Office of Kazakhstan, Nurdaulet Suindikov commented that in most cases the information put on the website was “unreliable and obviously false”.

Former Prime-Minister of Lithuania, Kazimira Prunskene emphasised that there was a high voter turnout in the election. “The participation was quite active and I have not noticed any non-compliance with the requirements or violation of democratic standards. On each ballot station I spoke with the observers, they represented different parties and independent organisations, almost everywhere an analysis and information centre was in place”, she said.

Sergey Gretskiy, an observer from the U.S. noted some cases of the so-called “family voting”, when family members voted for their relatives who did not turn up at the ballot station. He observed that members of the election commission did not forbid this activity.

Voter turnout in the parliamentary election in Kazakhstan reached 75.07 %. According to the information received from the election commissions of provinces and the cities of Astana and Almaty, out of 9 million 300 thousand voters included in the lists, 6 million 980 thousand people turned out to vote at the polling stations.

The OSCE refused to recognise the election in Kazakhstan as democratic. “The election was well organised from a technical point of view, and observers noted the introduction of amendments in the law which were designed to secure the presence of at least two parties in the Parliament, but the government failed to provide necessary conditions to conduct a genuinely free election”, reads the statement issued on the OSCE website.

The observers of the CIS Observation Mission and of the Parliamentary Assembly of Turkic Speaking States announced that the voting in Kazakhstan was open and transparent, and that it was in accordance with international standards.

The ODIHR/OSCE Observation Mission reported limitations in the course of the pre-election campaign in Kazakhstan. “Unfortunately, we have observed a strongly controlled situation in execution of the agitation programme, where electoral rights of citizens were severely restricted, social debates were limited and representatives of mass-media acted in a manner which may be characterised as voluntary censorship and the lack of editorial independence in broadcasting media”, Miklosh Kharasti, the head of the ODIHR/OSCE Mission noted during the conference.

The USA agreed with the evaluation of the election in Kazakhstan given by the OSCE delegation. in the press release of the State Department the following was announced: “We look forward to engaging with the new multi-party Parliament as we continue our cooperation with the government and people of Kazakhstan to implement our broad-ranging strategic partnership”.

On the 17th January, Catherine Ashton, the High Representative of the European Union for Foreign Affairs also emphasised that she can clearly see development of pluralism and democratic culture in Kazakhstan. At that, the head of the EU diplomacy expressed regret that these elections, “fell short of being genuinely pluralistic and did not meet key democratic principles”, thus agreeing with the OSCE evaluation.

At the press conference, observers from the United States Margarita Assenova and Richard Wells said that the voter turnout in Zhanaozen was lower than officially stated. According to them, the voter turnout on some ballot stations did not exceed 50-60 percent. However, reportedly, in Mangistau Province where the bloody events took place in December, the turnout was officially listed at 74.2 percent.

The official representative of the General Prosecutor’s Office of Kazakhstan Nurdaulet Suindikov announced that the election to the Majilis (the lower house of the Parliament) and to maslikhats (local representative bodies) of Kazakhstan were held in compliance with the requirements of the Constitution and the Law ‘On elections’.

The Central Election Commission of Kazakhstan announced the results of the parliamentary election. According to final results of the election, the ‘Nur Otan’ party won 80.99% of the vote, ‘Ak Zhol’; 7.47%, the CPPK; 7.19%. As for the results of voting on the party lists, the seats were allocated as follows: the ‘Nur Otan’ National Democratic Party won 83 seats, the ‘Ak Zhol’ Democratic Party of Kazakhstan; 8, the Communist People’s Party of Kazakhstan; 7. Lest we forget that the members, in accordance with the number of seats allocated to the winning parties, are nominated by the party from among the candidates included in the approved list.

In accordance with Article 59 point 2 of the Constitution of Kazakhstan, the first session of the Parliament of Kazakhstan of the fifth calling shall be summoned on the 20th of January, 2012 at 10.00 a.m. in the city of Astana.

Nursultan Nazarbaev stated that from now forth Kazakhstan is not going to invite experts who criticise elections which are held in the country. ”In the future we are not going to invite to Kazakhstan any experts, employed by someone, who criticise our elections”, -the official mass- media quote Nazarbaev’s statement voiced during a meeting of the office of the political council of the party.

The Prime-Minister Karim Masimov released a statement on resignation in connection with announcement of the results of the election to the Majilis of the Parliament.

The General Secretary of the Organisation of Islamic Cooperation (ОIC) Ekmeleddin Ihsanoglu congratulated the Kazakh people on the successful holding of the early parliamentary election. Adelegation of observers from the OIC General Secretariat, along with a group of observers from the Hashemite Kingdom of Jordan, took part in the monitoring of the early parliamentary election. During their work, members of the delegation visited various ballot stations in large districts of Astana, observing all stages of voting.

Nazarbaev appealed to the Kazkh youth not to be absorbed by the events of the ‘Arab spring’. ”There are some people who enviously look at how we live and who would like to see us in a miserable state. We must not forget that the economy of the countries which went through revolution regressed by some 10-15 years’, President of Kazakhstan stated.

A serious fire broke out in the building of the ‘Khazret Sultan’ mosque which is currently under construction. Thearea consumed by the fire reached approx. 300 square meters. A 23-year-old, Maralbek Baurzhan died in the fire. The ‘Khazret Sultan’ mosque which is expected to become the biggest one in Central Asia was planned to be open in December 2011 for the 20th anniversary of Kazakhstan’s independence. Later, the opening was postponed for one year due to failure to complete the construction work.

At the press conference, representatives of the ANSDP opposition party announced that they do not recognise the results of the past election and they are going to insist on an overturn of its results.

Nursultan Nazarbayev signed the Law ‘On Television and Radio Broadcasting’. The law, in particular, requires cable operators to include in the basic package all public television channels that broadcast in the region. In addition, foreign channels that distribute the signal to the territory of Kazakhstan will be required to register in the country and to fulfill all the requirements of the law. According to the law, an authorised government body will run the registration of foreign and domestic television and radio channels, and broadcasting operators will be granted licences. According to the ‘Article 19’ Organisation, “the law gives to the government and local administrative authorities very broad, practically unlimited powers to control broadcasting, which, in essence, allow arbitrary political interference as well as political control.”

Kazakhstan ratified the agreement with ADB (Asian Development Bank) on financing of the reconstruction of the CAREC-2 road (Central Asia Regional Economic Cooperation). Nursultan Nazarbaev, the president of Kazakhstan approved the law of the Republic of Kazakhstan ‘On Ratification of the Framework Agreement on financing (KAZ: Investment programme CAREC-2 Transport Corridor (areas located in the Mangistau Province). At present, the CAREC countries include the following states: Afghanistan, Azerbaijan, Kazakhstan, China, Kyrgyzstan, Mongolia, Tajikistan, Uzbekistan. Also, a great interest in this programme has been demonstrated by Turkey, Pakistan and Russia.