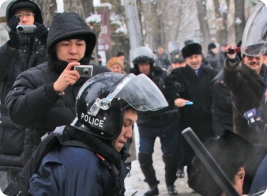 The Open Dialog Foundation constantly monitors the level of democracy in Kazakhstan. Throughout the last month we have noted alarming trends of the threatening of democratic institutions, independent sources of information and personal freedoms of civil society activists by the authorities of Kazakhstan.

All actions against individual freedom and openness of the society which are taking place and are covered in news reports of the Foundation, including unjustified refusal to accredit an observer mission for the parliamentary election from the Republic of Poland, force us to put into question Kazakhstan’s observance of the declared commitments undertaken towards the International Community. In particular, Kazakhstan seriously violates the International Covenant on Civil and Political Rights:

• on the urgent character of informing of the reasons for the arrest and charges brought against apprehended persons (article 9 paragraph 2);

• on freedom of speech and expression (Article 19);

• on freedom of peaceful assembly (Article 21);

• on freedom of association (Article 22).

These facts call into question the legitimacy of the current government of Kazakhstan to continue negotiations with the European Union on a new agreement of cooperation in the coming years. Reprisals after the Zhanaozen tragedy in December 2011 transferred  Kazakhstan below the red line, thus stripping the country it of its title of “the leader of the Central Asian region in terms of democratic principles”. Apprehensions of opposition and independent mass media workers, based on fabricated evidence. Confirm Kazakhstan’s dangerous characteristics and are symptomatic of an oppressive regime, which is no longer fit to maintain an open dialogue between the opposition and the government.

The “Open Dialog” Foundation expresses its deep regret and concern about the reprisals to the representatives of the opposition and independent media in Kazakhstan, and calls for:

• an immediate reaction on the part of the European Parliament, European Commission, OSCE, UN and the U.S., international NGOs and the media, representatives of international civil society to initiate an independent international investigation into the tragedy of December 16, 2011 in Zhanaozen;

• recognising the opposition activists and strikers, persecuted independent journalists and operators arrested during and after the Zhanaozen tragedy as political prisoners, demanding of courts to provide open cases of all those arrested and detained, with respect of human rights and the presentation of evidence, as an unprecedented wave of repressions started in Kazakhstan was in connection with these events.

• international observers to assess the actions of state authorities of Kazakhstan, which defiantly refuse to carry out a dialogue with civil society as a whole; forcibly suppress social tensions and support the opposition in the society; massively persecute activists and representatives of civil society.

It is important that the Government and the President of the Republic of Kazakhstan would immediately:

• release from custody all prisoners and detainees of union leaders in May 2011, as well as active participants and supporters of the strike in the Mangistau region;

• lift the Martial Law in Zhanaozen and Shepte, and provide a possibility to open an independent international examination on the Zhanaozene tragedy in 2011.

• cancel the indictments against trade union leaders and activists;

• reinstate laid-off workers and activists, who demanded respect for basic labor rights in the Mangistau region;