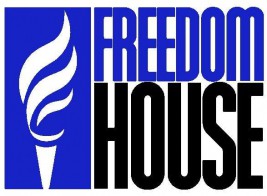 Freedom House condemns the arrest of opposition activists and an independent journalist in Kazakhstan and calls for their immediate release. These arrests follow parliamentary elections on January 15 and investigations into large-scale December uprisings.

On January 23,  Kazakh authorities searched the apartments and offices of members of Alga, an unregistered opposition party that was not allowed to participate in parliamentary elections, and independent newspaper, Vzglyad. Authorities detained at least three people, including Alga party leader, Vladimir Kozlov, Vzglyad chief editor, Igor Vinyavskiy, and opposition activist, Serik Sapargali. After the election, Kozlov predicted that Kazakh authorities would try to blame the opposition for the Zhanaozen uprising; presently, he is being detained on charges of inciting social discord, and Vinyavskiy is detained on charges of inciting the overthrow of constitutional order. On December 16, 18 people were killed in riots in Zhanaozen, a town in western Kazakhstan, when a strike by oil workers led to clashes between police and protesters. Kazakhstan president Nursultan Nazarbayev enforced a state of emergency, which has yet to be lifted. The official investigation into the deaths is under way.

“Kazakhstan, as a former chair of the Organization for Security and Cooperation in Europe, must live up to its promise to the international community that it will advance democracy and human rights,” said Susan Corke, director for Eurasia programs at Freedom House. “The actions of the authorities and treatment of opposition activists and independent journalists undermine respect for fundamental freedoms.”

Despite constitutional guarantees, the government imposes restrictions on freedom of association and assembly. Activists have faced arrest and trial for participating in demonstrations. Kazakh media remain subject to legal restrictions, defamation suits, harassment and pressure by politicians. Journalists who are willing to criticize the government continue to face obstacles in reporting. In November 2011, Valery Surganov of the news website Guljan was sentenced for defamation after accusing a local financial police officer of promiscuity in a July 2011 article.

Freedom House is an independent watchdog organization that supports democratic change, monitors the status of freedom around the world, and advocates for democracy and human rights.