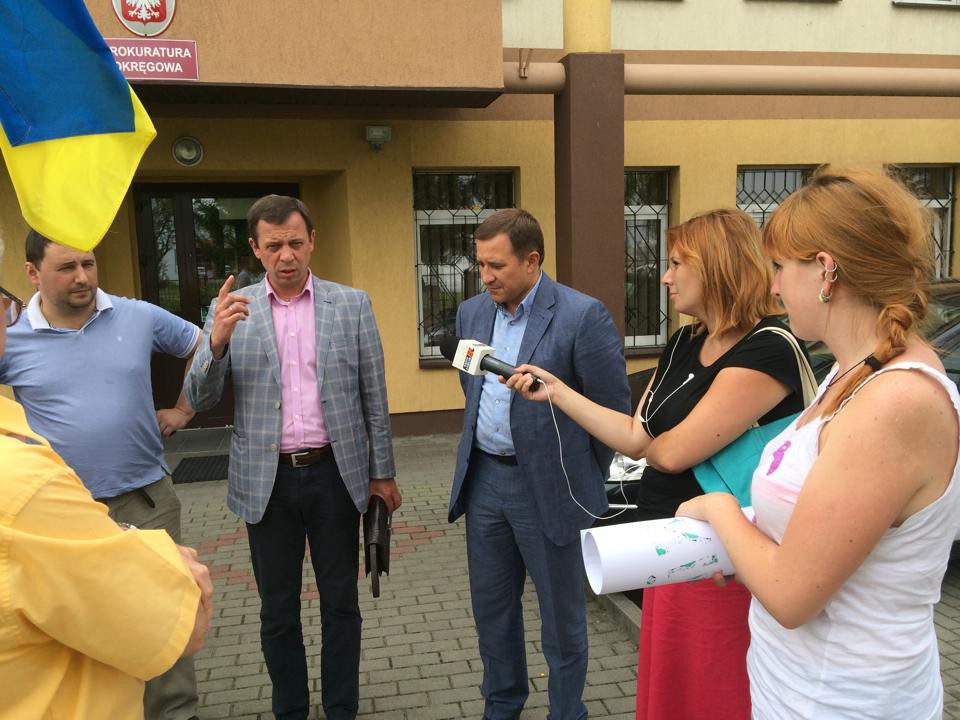 The Regional Prosecutor’s Office in Zamość presented charges to a Ukrainian citizen who was carrying vests and helmets across the border in Zosin. A protest action against the criminal prosecution of persons involved in helping Ukraine was organised and held by the Open Dialog Foundation and EuroMaidan Warsaw. Oleg I. is facing up to 10 years’ imprisonment.

Last Monday morning, Oleg I, who was transporting 551 helmets, seized in Zosin in late June, reported at the prosecutor’s office. The Ukrainian bought the helmets in Poland with money collected in Ukraine to help those fighting.

Polish regulations are very complex and they treat the export of vests and helmets in the same manner as exporting a tank. Although the Minister of National Defence, Tomasz Siemoniak stated recently that bullet-proof vests and helmets are referred to as non-lethal weapons, which serve not for killing, but for self-defence and that there is no reason for Polish customs services to block such exports to Ukraine, still, according to another part of the provisions of the law, the persons who helped in their carriage face up to 10 years in prison. For this reason, the Open Dialog Foundation offered legal assistance to Oleg I. – Tomasz Czuwara, a spokesman for the Open Dialog Foundation announced.

During the interrogation at the prosecutor’s office, the Ukrainian was presented with charges of attempted cross-border transport of goods whose export requires authorisation. In connection with the fact that his deed met the legal definition of the crime under Article 33 of the Act on foreign trade in goods, technologies and services of strategic importance for national security and the maintenance of international peace and security of 29 November 2000, he is facing 10 years in prison.

While the prosecutor’s office was conducting the interrogation in the presence of a lawyer hired by the Open Dialog Foundation, a protest action was being carried out near the building on Szczebrzeska Street; the rally was attended by representatives of the Foundation, young Ukrainian activists from EuroMaidan Warsaw, as well as Ivan Grytsak – General Consul of Ukraine in Lublin and two members of the Verkhovna Rada (the lower chamber of the Ukrainian Parliament). Ihor Vasyunyk and Michal Khmil, representing the ruling party, ‘Batkivshchina’, arrived in Poland in order to show their solidarity: “We wanted to express our support for our volunteers who are facing charges in Poland. We are here to assure the public that those people acted with good intentions, wishing to support the brave defenders of eastern Ukraine”, – Igor Vasyunyk stated. Michal Khmil added: “Members of the Ukrainian parliament appealed to Polish parliamentary authorities and the president, as well as to the authorities of the European Union for the procedures to be adapted in such a way that will facilitate the rendering of assistance to Ukraine. Recently, we addressed a letter to our Prime Minister requesting that he personallyinterfere in the matter of volunteers who wanted to save the lives of the defenders of Ukraine and now, because of this, they are in trouble.

The regional prosecutor’s office in Zamość also conducts the case relating to the transportation of 42 vests, seized in March at the border crossing in Hrebenne. This equipment has been stored in a warehouse since March, whilst it should rather be protecting the lives of those fighting in the east. Today, the prosecutor’s office announced that the interrogation of people connected to the export will be take place next Monday.