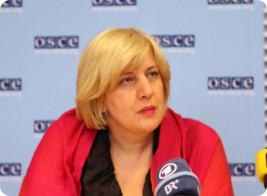 VIENNA, 25 January 2011 – The OSCE Representative on Freedom of the Media, Dunja Mijatović, condemned today as excessive a raid by law enforcement officers on Kazakhstan’s Vzglyad newspaper and urged the authorities to let independent media work freely.

Officers of the National Security Committee on 23 January searched Vzglyad’s main editorial offices in Almaty, seizing computers and financial records. As a result of the raid publication of the periodical has been delayed. The paper’s chief editor, Igor Vinyavsky, was jailed for 72 hours on suspicion of calling for the forceful overthrow of the government.

“I call for the immediate release of Vinyavsky and the return of all equipment so that this newspaper can resume normal operations,” Mijatović said.

The raid on Vzglyad is part of a worrying trend against independent media outlets.

Last week, several staff of the Internet-based Stan TV broadcaster were summoned to law enforcement agencies, reportedly to be questioned as witnesses concerning the recent unrest in the southwestern city of Zhanaozen. However, the journalists claim they were asked many questions related to their professional activities and Stan TV operations.

Earlier this month, law enforcement officers detained a Stan TV crew in Zhanaozen. The broadcaster also said that on 10 January, three of its journalists were questioned for several hours at a National Security Committee office in Almaty.

Last September, a court ordered Stan TV to take its antennas off the roof of its Almaty office on the grounds that they constituted a health hazard. In the same month, one of the broadcaster’s business partners was ordered to suspend its activities for violating fire-safety regulations.

“Vzglyad and Stan TV should be allowed to operate freely and their journalists should be able to work without fear of intimidation,” Mijatović said.

“I hope that my call will be heard and that these and other independent media outlets will continue their important work without further obstacles in their way.”

“My Office stands ready to assist the Kazakhstani authorities in implementing their OSCE media-freedom commitments.”