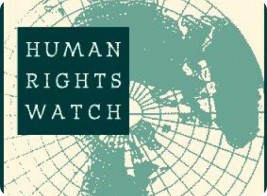 The charges appear to be linked to events in Zhanaozen, in western Kazakhstan, where oil workers were on strike for seven months and clashes between civilians and police erupted briefly in December 2011. Kazakh authorities should immediately stop misusing criminal law to crack down on political opposition activists and other outspoken critics of the government, Human Rights Watch said.

“The authorities pledged a thorough and transparent investigation into the Zhanaozen violence, but these targeted searches and arrests of  opposition activists suggest that the government is simply trying to silence its critics,” said Hugh Williamson, Europe and Central Asia director at Human Rights Watch. “The Kazakhstan authorities’ actions will taint the investigation. A genuinely pluralistic and rights-abiding government tolerates dissent, does not quash it.”

The authorities also brought charges on January 23 of “calling for the forcible overthrow of the constitutional order using mass media” against an Almaty-based newspaper editor. The authorities searched his home and the newspaper’s office that evening, and starting that morning, had conducted searches of opposition activists’ homes and the unregistered opposition party Alga’s office in Almaty.

On December 16, clashes and violence erupted between civilians and police at the site of a peaceful oil workers’ strike in Zhanaozen’s main square around Kazakhstan’s Independence Day celebrations. The authorities immediately opened an investigation into the rampaging, looting, and violence that left 16 civilians dead in Zhanaozen, and pledged to hold those responsible accountable.

On January 6, Aizhangul Amirova, another opposition activist, was detained on charges of “inciting social discord,” and on January 16, a court sanctioned her detention for two months. A January 23 statement by Kazakhstan’s National Security Committee (KNB) acknowledged it had opened a criminal investigation against Amirova and others on charges of “inciting social discord.”

Amirova, an Alga member, was detained at Aktau airport on January 6 and is in custody in Zhanaozen. The National Security Committee statement says that the Zhanaozen city prosecutor sanctioned searches of homes and workplaces of citizens living in Almaty and the Almaty district and other investigative activities in connection with its criminal investigation.

Under Kazakhstan’s criminal code, “inciting social discord” refers to “deliberate actions aimed at the incitement of…enmity or antagonism” and carries a maximum penalty of 10 years in prison. This criminal offense is vaguely defined and overbroad, and incompatible with respect for the fundamental rights to freedom of expression and association, Human Rights Watch said. These are basic rights protected by international treaties to which Kazakhstan is party and should not be violated, Human Rights Watch said.

On the morning of January 23, KNB officers in Almaty began simultaneous searches of Alga’s office and the homes of Vladimir Kozlov, head of the party; Mikhail Sizov, his deputy; Gulzhan Lepesova, the party’s financial consultant, and Askar Tokmurzin, the head of Alga’s security. That morning, KNB officers also conducted a search of the apartment of Zhanbolat Mamai, leader of the youth opposition group Rukh Pen Til.

Kozlov’s wife, Aliya Turuzbekova, told Human Rights Watch that at about 6:30 p.m., after the authorities completed a search of both their house and their apartment, KNB officers took her husband away to an unknown location. They also searched her parents’ home, she said.   At approximately 8 p.m., Kozlov called and told her that he had been placed under arrest for 72 hours and faces criminal charges of ”inciting social discord.” Kozlov is being held at the KNB detention center in Almaty.

KNB officers began the search of Sizov’s apartment at approximately 8 a.m. in accordance with a search order (postanovlenie) tied to the criminal case against Amirova and events in Zhanaozen. They prevented Sizov from calling a lawyer or making any other phone calls. They then took Sizov for questioning at the KNB department in Almaty and released him about six hours later. He is subject to a nondisclosure agreement, barring him from speaking about the details of the investigation and what the authorities questioned him about, and is considered a witness in the criminal investigation.

Tokmurzin and Lepesova were similarly detained following searches of their homes on the morning of January 23, questioned, and later released. KNB officers seized laptops, flash sticks, CDs, and other documents and papers from the Alga office, apartments, and homes they searched.

Mamai and Bolat Atabayev, a member of the opposition movement The People’s Front, were also questioned by KNB officers, informed that they are under investigation for “inciting social discord,” and made to sign nondisclosure statements and statements that they would not leave Almaty during the investigation. According to information received by Human Rights Watch, Serik Sapargali, another member of The People’s Front, was also detained on January 23 and faces the same charges. Human Rights Watch has not been able to independently confirm this information.

Igor Vinyavskyi, editor-in-chief of the newspaper Vzlgyad, who is involved in political opposition activism, was taken into custody following a search of his home and the Vzglyad office. Vinyavskii was charged with “calling for the forcible overthrow of the constitutional order using mass media,” which carries a maximum sentence of seven years in prison. His wife told Human Rights Watch that he has been placed under arrest for 72 hours and is being held at the KNB detention center.It is not clear whether these charges were brought against him in connection with the investigation into the violence in Zhanaozen, and a January 24 KNB statement announcing his arrest does not indicate any link.

The authorities have not yet made public any information on the alleged actions of the arrested activists or the investigation that serves as the basis for detaining them on suspicion of violating Kazakhstan’s criminal code.

“If the Kazakh authorities can prove these political activists were involved in the violence in Zhanaozen, they shouldn’t need to resort to using vague and undefined criminal allegations to imprison them,” Williamson said. “The ‘inciting social discord’ charge should be dropped immediately and those against whom there is no evidence of any violent activity should be released from custody.”

Kazakh authorities used the charge of inciting social discord to convict union lawyer Natalia Sokolova last year. On August 8, 2011, Sokolova was sentenced to 6 years imprisonment for speaking out to oil workers on issues of wage disparity. Her husband Vassiliy Chepurnoi told Human Rights Watch that her lawyer submitted an appeal to the Supreme Court on January 20, 2012. Supreme Court review gives the Kazakh judicial system yet another chance to uphold international standards in her case.