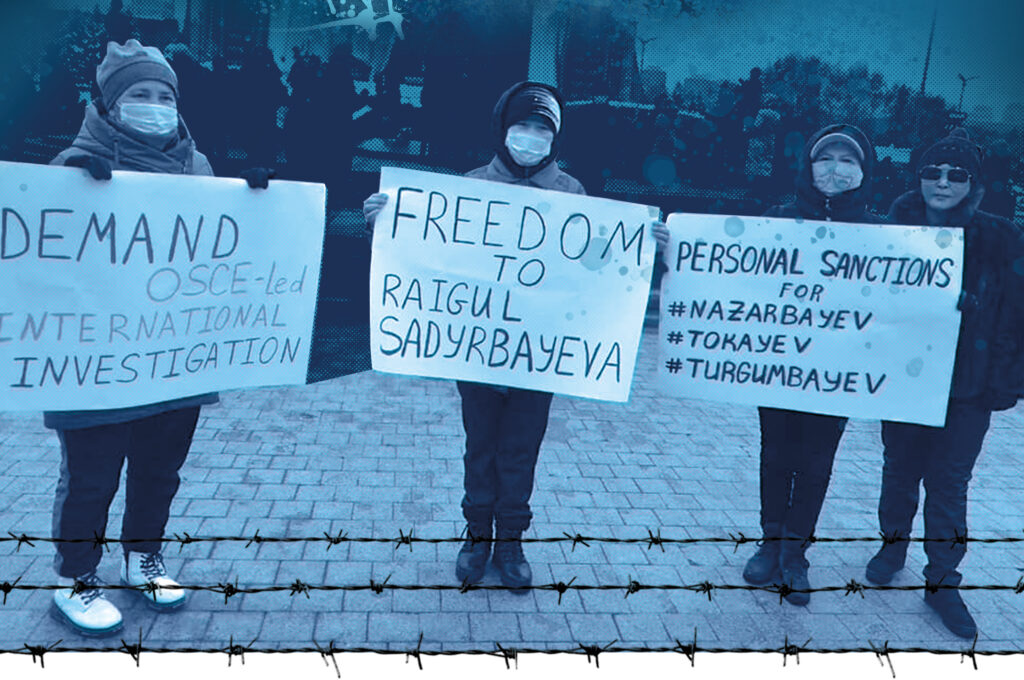 Human rights situation is deteriorating rapidly in Kazakhstan. This rise in political repression, unprecedented in Kazakhstan’s modern history, is associated with mass shooting and torture during and after the mass peaceful protests in January 2022 as well as with a ban on the peaceful opposition movements Democratic Choice of Kazakhstan (DCK) and “Koshe Partiyasy”.

At the beginning of 2022, tragic events took place in Kazakhstan. In response to the demands for genuine political reforms, peaceful protesters were labelled as “terrorists” by the Kazakhstani authorities. President Tokayev gave the order “to shoot to kill without warning” at the protesters. At least 238 people (including children) were killed because of the violent dispersal of peaceful protests across the country. The authorities have not yet provided full information on those who died during the January events, disclosing only their surnames. Human rights defenders claim that some of the data do not match theirs, which may indicate a higher number of victims.

According to the Kazakhstani authorities, as of the end of September 2022 at least 1035 people were convicted in cases related to the January events, 93 of them received real prison terms, 930 were given suspended sentences and are on probation now. About 400 more people are under investigation. Among those convicted are human rights activist Lyazzat Dosmambetova, activists Zhanmurat Ashtayev and Kairat Sultanbek. The Kazakhstani authorities also politically persecute members of the legal community. For example, the authorities are exerting pressure and attempting to revoke the licence of Murat Zholshiyev, a lawyer from the city of Shymkent who defends victims of torture during the January events.

The authorities have accused peaceful protesters killed by the authorities of “terrorism” and “mass disorders”. According to the authorities, 149 of the 238 killed peaceful civilians were allegedly involved in attacks on government buildings. In accordance with Kazakhstani law, “attacking or seizing buildings, structures or facilities” is a “terrorist offence”. Based on the information from human rights organisation “Ar. Rukh. Khak.”, there are at least 33 known cases in which protesters have been posthumously charged with “attacking buildings”. That is, they have been posthumously accused of “terrorism”.

The efforts of the investigative authorities are directed against peaceful protesters and witnesses of the January events, while criminal actions by law enforcement agencies and the army are not properly investigated. The authorities have reported that criminal cases have been opened against 49 police and law enforcement officers. However, there is no guarantee that these cases will reach court and result in convictions. As of 20 October 2022, not a single law enforcement officer was brought to real responsibility for the torture of detainees, while according to various estimates, from 6 to 8 people died as a result of torture during January events.

According to a study by the human rights organisation Kazakhstan International Bureau for Human Rights which interviewed detainees in connection with the January events, 71% of them had been tortured. In 83% of cases, lawyers filed complaints of torture and only 18% of cases succeeded in obtaining the status of torture victim or the detention of a torture suspect. More than 10,000 thousand people were detained during the January events. According to the Kazakhstan NGO Coalition against Torture, their organisation received 188 complaints of torture. In 72 cases, law enforcement agencies closed the torture case and only two cases went to trial. In the remaining cases, investigations are allegedly ongoing.

In May 2022, the Anti-Corruption Agency of the Republic of Kazakhstan reported that 279 criminal cases were opened on allegations of torture. However, as of July 2022, only 15 law enforcement officials had been identified as suspects on charges of “abuse of power” or “torture”, nine of whom had been detained. Practice shows that investigative authorities close torture cases ostensibly due to lack of corpus delicti. One example is the case of political prisoner Kosay Makhanbayev, who was subjected to torture during the January events. The torture case was closed without an objective and transparent investigation and police officers managed to go unpunished.

On 1 September 2022, President Tokayev announced an amnesty for participants in January peaceful protests. Tokayev stressed that the amnesty would not extend to “organisers of mass disorders”. Human rights defenders Yevgeniy Zhovtis, Bakhytzhan Toregozhina and “ActivistsNotExtremists” human rights coalition expressed concern that most peaceful demonstrators, human rights defenders and civil activists will not be able to benefit from the amnesty because they are facing charges under “extremist” articles. Moreover, the amnesty does not acquit those convicted and therefore does not imply their rehabilitation [1], [2], [3].

According to the draft amnesty law, persons who have committed minor and moderate crimes may be exempted from criminal responsibility. In addition, they must admit their guilt and repent. It is worth noting that amnesty will be granted not only to protesters but also to law enforcement officers. According to the draft law, amnesty will be granted to persons who committed murder “committed upon the use of excessive force in self-defence” (Article 102 of the Criminal Code), “committed upon the excess of measures, necessary for the detention of a person, committed a crime” (Article 103 of the Criminal Code) and in cases of “causing death by negligence” (Article 104 of the Criminal Code). There is a risk that charges against the majority of law enforcement officers will be reclassified under these articles and they will fall under amnesty. The Kazakhstani authorities state that only one police officer may qualify for the amnesty. At the same time, according to the Deputy Prosecutor General Aset Chindaliev, “not a single crime of the police has been qualified as a deliberate act”. This creates the preconditions for amnesty for the police.

Activists from Karakalpakstan, who have been accused by the Uzbek authorities of “encroaching on the constitutional order of the Republic of Uzbekistan”, are being prosecuted in Kazakhstan. The activists are being prosecuted in connection with mass peaceful protests that were violently suppressed by the Uzbek authorities in Karakalpakstan in July 2022. At least four activists are known to have been detained in Kazakhstan – Raisa Khudaibergenova, Koshkarbai Toremuratov, Zhangeldy Dzhaksymbekov and Ziuar Mirmanbetova. Another activist, Niyetbay Urazbayev, chairman of the Karakalpak ethnocultural association in Aktau, was put on an international wanted list by Uzbekistan. He has now been summoned to the police in Kazakhstan. There is a threat that Kazakhstan will hand over all prosecuted activists to Uzbekistan. Ethnic Kazakh from China Saltanat Kusmankyzy and Shaden Karibayev (he has a disability) have been sentenced to long-term imprisonment for their anticorruption activism [1], [2].

The investigation into the mass shooting and torture of peaceful people in January 2022 has yet to assess the actions of Kazakhstan’s top leadership, including President Tokayev, who gave the order to shoot at the peaceful people, including peaceful protesters. The use of force by the authorities was not proportionate to the level of threats made by the protesters. This also applies to the decision to deploy the Russian-led CSTO (Collective Security Treaty Organisation) troops into Kazakhstan.  The role of the involvement of the military of the Collective Security Treaty Organisation (CSTO), at the request of the Kazakh authorities, in suppressing the protests also has not been investigated. The Kazakh authorities have no interest in conducting an objective and comprehensive investigation into the January events.

We call on the United States, the European Union, the United Kingdom, Canada and other democratic states to support the call of the January 2022 European Parliament resolution on Kazakhstan and of four senators of US Senate Foreign Affairs Committee for an independent international investigation of the mass shooting and torture in Kazakhstan in the January events 2022.

We also call to support the call of the European Parliament for personal sanctions against high-ranking officials of Kazakhstan for grave violations of human rights, and for more active support of civil society and opposition of Kazakhstan.

ATTACHMENT: POLITICAL PRISONERS AND OTHER VICTIMS OF THE POLITICAL PERSECUTIONS

1. The list of political prisoners not connected with the January 2022 events

2. The list of political prisoners connected with the January 2022 events

3. The following individuals identified by human rights defenders have been politically persecuted in connection to the mass repressions and shootings following peaceful protests in January 2022 and were placed in the pre-trial detention facilities across the country. Their current whereabouts are unknown due to the fact that the investigation is not transparent and access to information to human rights defenders is limited.

4. The list of human rights defenders subject to political persecution

5. List of civilians killed in January, including participants of peaceful protests, posthumously prosecuted on “terrorist” charges under Article 269 (“seizure of administrative buildings”) and Article 272 (“organisation and participation in mass disorders”)