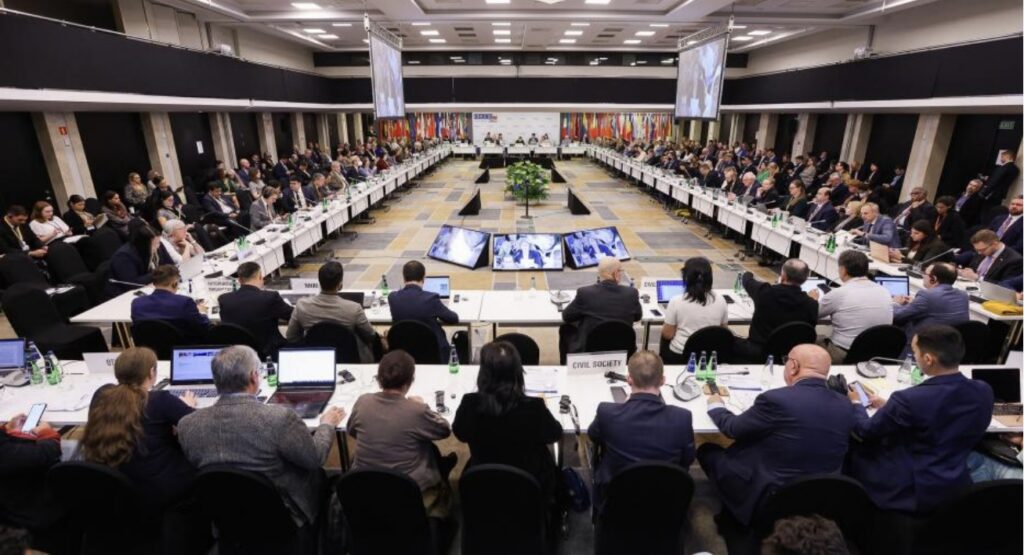 ODF, as always, was present at the conference to advocate for human rights and fundamental freedoms in two of the regions we work in. Our delegation took the floor in three of the plenary sessions.

Apart from Barlyk Mendygaziyev’s intervention on behalf of human rights defenders in Kazakhstan, ODF’s representatives and guests gave three speeches at the plenary session on the topic of the rule of law and fundamental freedoms in Poland.

First was ODF’s own Martin Mycielski, who took the floor during the first plenary session on September 27th (Plenary Session I: Democratic Institutions), which tackled i.a. the topic of “National human rights institutions and the role of civil society in the protection of human rights”. In his speech Martin focused on the politicised public prosecution service in Poland and some of its victims, like judges Ewa Gregajtys, Ewa Leszczyńska-Furtak and Igor Tuleya, leaders of the Polish Women’s Strike, pro-refugee activists, former security services chiefs Paweł Wojtunik and Krzysztof Bondaryk, and finally PiS’s perceived business rivals like Piotr Osiecki or Przemysław Krych. Details on those cases can be found in our most recent report, which Martin also presented at the session.

Martin also highlighted how the politicised prosecution service and law enforcement created a hostile environment for human rights defenders in Poland. He finished with a strong statement: „Poland is slowly turning into a mafia state – where the institutions serve to protect the ruling elite, criminals, from the human rights defenders – not the other way round.”

On September 29th, during Plenary Session III: Tolerance and Non-Discrimination, ODF’s Bartosz Kramek took the floor to inform the representatives of OSCE Member States about the threat of the far-right in Poland, including the pseudo-Catholic fundamentalists from the Ordo Iuris Institute and other fascist organisations empowered by the ruling coalition and their propaganda.

„Against the backdrop of the erosion of the rule of law and democratic standards, hate crimes in Poland have been steadily on the rise. The ruling camp propaganda empowers right wing groups which promote discrimination and intolerance” – Bartosz Kramek at the OSCE.

Last but not least, we were proud to be joined by ODF’s friend and frequent collaborator Jakub Kocjan, campaigner and rule of law expert from Action Democracy. Jakub took the floor on Wednesday, 5 October during Plenary Session VII: Rule of Law II. As a lawyer, PhD candidate at the Institute of Legal Studies of the Polish Academy of Sciences and an activist who has been working for 5 years to defend the independence of the judiciary, Jakub focused his intervention on the ongoing threats to judicial independence in Poland.

„After the government switched off the Constitutional Tribunal, National Council of Judiciary and the majority of the Supreme Court, an ordinary citizen can count on fair judgement only thanks to the brave approach of a particular, independent judge who will be then persecuted for his/her decision. Poland is not a fully democratic country anymore”, Jakub concluded.

As ODF is committed to defending the rule of law with every possible means, just the week after, within the same conference we also organised a hearing in the plenary chamber under the title “Political repressions: deterioration of the rule of law in Poland continues”.