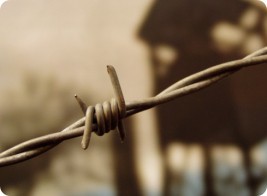 Igor Vinyavski, the editor of the ‘Vzglyad’ newspaper, Vladimir Kozlov, the leader of  the ‘Alga’ party, and Serik Sapargali, a social activist, who were apprehended by the workers of the National Security Committee of Kazakhstan, have not appeared at a hearing relating to the extension of their custody. According to their relatives, the judges were afraid of potential public outrage and so they went to the pre-trial detention centre for the so-called ‘circuit meeting’.  A closed ‘court hearing’ is now being conducted by the Almalinski District Court No. 1 in the NSC detention centre at the intercection of Vinogradova Street and Seifullina Street. None of the relatives or the public were allowed into the hearing.

On the 26th of January, 2012 at 4.00 p.m. in the Almalinsky Court of the city of Almaty, the issue of the extension of custody for Igor Vinyavski, Vladimir Kozlov and Serik Sapargali was settled at a closed hearing. They were all apprehended on Monday, the 23rd of January, 2012, by the workers of the National Security Committee of Kazakhstan. Earlier that day, searches in the office of the editorial staff and the party office, as well as in the men’s houses were undertaken.

On the 26th of January, 2012, the judge of the Almalinsky District Court of the city of Almaty sanctioned the arrest of two months for Igor Vinyavski, the editor-in-chief of the ‘Vzglyad’ newspaper, Vladimir Kozlov, the leader of the ‘Alga’ opposition party, and a politician Serik Sapargali.

At the appointed time, approx. 50 people gathered near the court: journalists, human rights activists and politicians. Everyone was waiting for the trial and the opportunity to take at least a short glance at Igor, Vladimir and Serik and to express their support for those three men.

People were holding placards with slogans, directed both to the NSC and to those apprehended.

But neither the journalist nor the opposition politicians were brought to the court. As we were told by their lawyers, the court decided to have a circuit meeting right in the detention center, where the prisoners are being held.

The Open Dialog Foundation hereby urges the authorities of Kazakhstan to immediately release Igor Vinyavski, the editor-in-chief of the ‘Vzglyad’ newspaper and Vladimir Kozlov, the leader of the ‘Alga’ opposition party, as well as the politician Serik Sapargali. The Open Dialog Foundation wishes to remind Kazakhstan about the OSCE commitments on human rights and fundamental freedoms, assumed by this country, and appeals to the Government of Kazakhstan to act in accordance with these commitments, including the matters relating to the guarantees of freedom of expression and the right to receive unbiased information without interference of public authority and urges the Government of Kazakhstan to conduct all investigations in an open and transparent way.