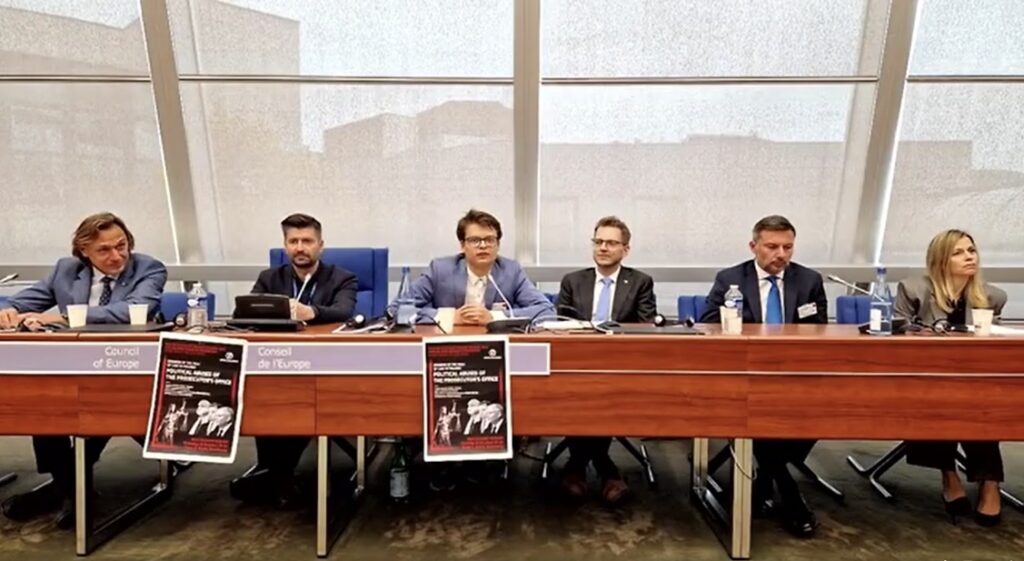 During the October 2022 plenary session of the Parliamentary Assembly of the Council of Europe ODF had the honour to organise a public hearing under the title “Erosion of the rule of law in Poland: Political abuses of the prosecution office”. The event, held on 13 October in the Council’s Strasbourg headquarters, was hosted by PACE Member Krzysztof Śmiszek MP (SOC, Poland) and featured a stellar array of rule of law experts & victims of the politicised Public Prosecutor’s Office in Poland:

The session was opened by ODF’s Vice-President Martin Mycielski and moderated first by MP Śmiszek, then by Jakub Kocjan.

MP Krzysztof Śmiszek welcomed the assembled guests and outlined the broader context of changes in Poland, including in the area of human rights. He described among others the case of Left MP Joanna Scheuring-Wielgus, deprived of her immunity due to charges brought by the prosecution service following her peaceful protest for women’s rights at a church mass.

ODF’s Martin Mycielski welcomed the guests on behalf of the event co-organizer, the Open Dialogue Foundation. He started his statement with recounting ODF’s recent humanitarian mission to Ukraine, linking the authoritarian mechanisms used by Vladimir Putin to those enacted by Poland’s ruling coalition. He then summarised the foundation’s mission and reminded about the deteriorating state of the rule of law in Poland. He presented and stressed the importance of the recent report prepared by the foundation on the process of politicisation of the prosecution service in Poland.

Rule of law expert Jakub Kocjan moderated the panel, talked about the political takeover of universities and the removal of scientists for political reasons. He underlined the systematic problem of the lack of implementing CJEU and ECHR rulings by the Polish government. He talked about the case of Judge Żurek, who successfully challenged the status of neo-judges in the CJEU, but the case is to be heard by neo-judges in the Supreme Court according to the CJEU’s instructions.

Board Member of the Themis Judges’ Association, Judge Dominik Czeszkiewicz, described his disciplinary case, where he was removed from adjudication and his salary was reduced for complying with CJEU rulings. He was targeted due to a verdict acquitting activists from the Committee for the Defence of Democracy (KOD) civic movement. He recounted how the careers of judges disobedient to the authority are being broken in an attempt to instil a chilling effect in the judiciary.

Entrepreneur Piotr Osiecki recounted the subsequent stages of his case, pointed out the links between the state of the rule of law and the willingness to invest and explained the chilling effect among entrepreneurs caused by the ruling party. He provided a unique, terrifying perspective on political repression in the business environment in Poland.