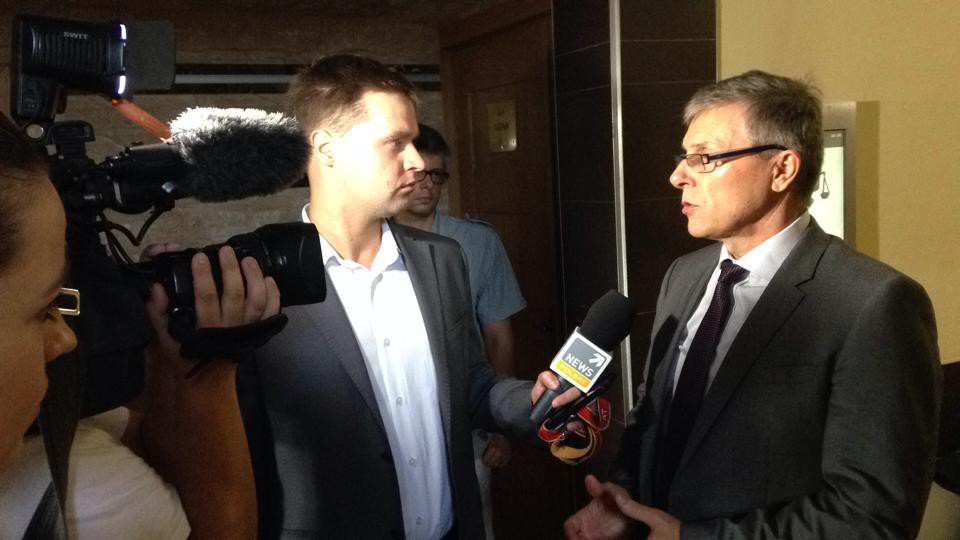 The District Court in Tomaszów Lubelski dismissed the complaint filed by the Open Dialog Foundation on the interception of a delivery of bullet-proof vests to Ukraine. There is no right to appeal against this judgment.

At the session held on 11 August, the Court was to hear the complaint concerning the confiscation of 42 bullet-proof vests of class IV. Two Ukrainian nationals who had been involved in organising the transport are suspected of customs smuggling. The equipment requisitioned on the border, included in the evidence, cannot fulfil its role of protecting life and hence on behalf of Messrs. Kushnir and Khavunek, the Foundation filed a complaint with regard to the matter.

During the Court session, a protest against the holding of the bullet-proof vests was held in front of the Court building. Together with EuroMaidan Warsaw and representatives of the Ukrainian minority, the Open Dialog Foundation pleaded that the equipment be returned to the ones who needed it. Solidarity with the protesters was expressed by, inter alia, the Ukrainians residing in Tomaszów Lubelski. Despite that, the Court dismissed the complaint relying on the applicable legal regulations. Most importantly, however, the Court’s decision does not rule out the possible return of the vests.

The defence lawyer for Messrs. Kushnir and Khavunek, Wojciech Mądrzycki commented on the Court’s decision, “We have invariably been of the opinion that the Customs Office should not treat the vests as evidence (…). The Court has not shared that position finding that at this stage of the prosecutor’s procedure, where investigative activities are under way, the vests may still be needed, for the expert to establish, for instance, whether the vests and the protection they offer may provide the basis for the decision as to whether they can be legally transported or not”.

“We expect a speedy resolution to the matter. It may happen soon even though a date has not been set as yet. This may be a matter of two weeks but it all depends on the decision and the good will of the Customs Office, which is lacking at the moment. As indicated by the Court, it is the prosecutor’s decision (expected this week) that is of key importance and which will open the path to closing the matter with the Customs Office – with a positive result we hope”, added Mądrzycki.