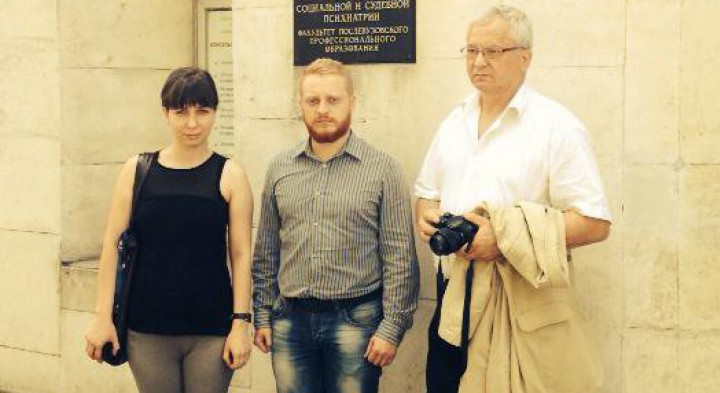 On August 11th, an international mission was launched by the Open Dialog Foundation in cooperation with the Ukrainian Ministry of Foreign Affairs. The mission includes the Polish MP Andrzej Lewandowski, representatives of the Ukrainian Center for Civil Liberties organisation and the OZON civil monitoring group’s Valeria Rybak as well as a representative of the Foundation.

The goal of the mission is to monitor the situation of the abducted Ukrainian pilot, Lieutenant Nadiya Savchenko as well as the four EuroMaidan activists being held in the Lefortovo prison and the Serbsky Centre psychiatric hospital. The delegation will attend meetings in Voronezh and Moscow alongside representatives of top state judiciary authorities as well as civil society and non-government organisations dealing with human rights observance in Russia.

Nadiya Savchenko is being held in the Voronezh detention centre. According to international law, Russia has no legal right to detain, charge or try the Ukrainian. In late July, the District court of Voronezh did not sanction Nadiya’s release from detention, regardless of the bail having been offered by her barrister. A similarly difficult situation is also the fate of Ukrainian citizens suspected of alleged terrorism in the occupied Crimea. Oleg Sentsov, a well-known Ukrainian director and producer, as well as Alexandr Kolchenko, Gennadiy Afanasyev and Aleksey Chirniy – all four having been activists of EuroMaidan. The main cause for the activists’ repression is their unwavering position on territorial integrity of Ukraine. Until recently, they were held at Lefortovo detention centre in Moscow, but according to the latest news Aleksey Chirniy was transferred to Serbsky Centre psychiatric hospital. His condition remains as of now, unknown.

It is already the second monitoring mission to the Russian Federation to have been organised by the Foundation. On July 16-18th, the first mission was held with Lieutenant Nadiya Savchenko in mind. Russian state authorities and judiciary officials were visited by Polish MPs, deputies to the Ukrainian Supreme Council, representatives of Ukrainian human rights organisations as well as the Ukrainian Civil Ombudsman.