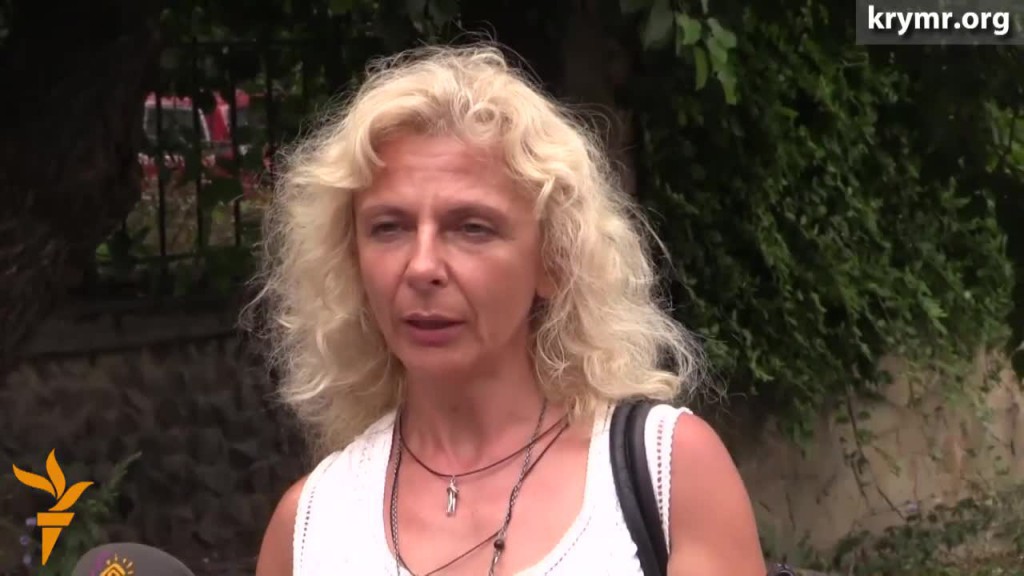 A fabricated criminal case of alleged preparation of terrorist acts on the territory of the Crimean peninsula, with four Crimean civil activists charged (including a well-known director Oleg Sentsov), is gathering pace. Theater director Galina Dzhikayeva has fallen under ‘‘suspicion’’ of being involved into the preparation of a terrorist act. Because of this, she had to leave the territory of the peninsula.

Galina Dzhikayeva interviewed by the mass media. A screenshot of a video from the ‘‘Centre of Journalistic Investigations’’ YouTube channel:

Galina Dzhikayeva is a Ukrainian theatre director. She graduated from Kiev National Culture and Arts university as a stage director of a drama theatre. She worked at the Chernomorskaya TV and radio company in Simferopol, Crimea, as a correspondent of “Assol” radio channel, as a production editor and a correspondent of the “Volna” news service. Galina was the leader of the “My” (‘’Us’’) studio theatre. In September 2011 she created an art centre ‘‘Karman’’ in Simferopol, of which she is now a leader.

In March 2014, during the occupation of Crimea by Russian troops, Galina Dzhikayeva was an active participant of rallies, standing for Ukraine’s integrity. At this period Anton Romanov[1], a stage director of Karman art centre, and Gennady Afanasiev[2], a Crimean civil activist, requested Galina Dzhikayeva to allow medical training courses for the locals to be held in the art centre. As a result, three classes were held in the theatre building, at which the local population was taught how to administer first aid.

During the process of occupation of Crimea there were mass protests of Crimean citizens against the aggression of Russian troops. Crimean stage directors, too, took an active pro-Ukrainian position; one of them was Oleg Sentsov, who is now being charged with organising a terrorist group in Crimea.

On 31 May, 2014, Dzhikayeva made a comment on the air of Echo of Moscow radio station in support of the arrested stage director Oleg Sentsov charged with terrorism by the Federal Security Service of Russia. Her speech ended with the phrase ‘‘I think they can make a terrorist out of any dissentient person in Crimea.’’

On 17 July, 2014, Galina Dzhikayeva received a telephone call from the representatives of the Crimean department of the Federal Security Service of Russia who invited her to an unofficial meeting. According to Dzhikayeva, at the meeting she was told that she was involved into Oleg Sentsov’s case as a person suspected of participating in a terrorist organisation. Galina Dzhikayeva said that the Federal Security Service of Russia had seen a connection between the medical training courses and ‘‘Sentsov’s terrorist group’’. Moreover, all of the 15 employees of the art centre, one of which is under age, fell under suspicion as well, although the Karman team did not take part in the courses. Because of the danger of being detained, Galina Dzhikayeva left the peninsula.

The Crimean department of the Federal Security Service of Russia refused to give its comments on Galina Dzhikayeva’s statement about the Russian security services putting pressure on her and her colleagues.

On 28 July, 2014, the spokesperson for Dmitry Dinze – the defence counsel in the criminal cases of Oleg Sentsov and Aleksandr Kolchenko – wrote in his blog that Dinze had prepared an appeal addressed to the Head of the Investigative Committee of Russia, Aleksandr Bastrykin. In his appeal, Dmitry Dinze is asking to check the facts of psychological and other pressure on Dzhikayeva by the employees of the Simferopol Department of the Federal Security Service of Russia, to establish and check the facts of possible falsification of the case files concerning Oleg Sentsov, which are being collected by the employees of the Federal Security Service of Russia on the territory of Crimea.

Galina Dzhikayeva believes that the charges of terrorist activity laid against Oleg Sentsov do not have any evidentiary foundation, so everything that the employees of the Federal Security Service of Russia are charging the Karman art centre team with, is a made-up story.

We remind that four citizens of Ukraine – Oleg Sentsov, Gennady Afanasiev, Aleksey Chirniy and Aleksandr Kolchenko – were kidnapped by the employees of the Federal Security Service of Russia from the occupied territory of Crimea in May 2014. They are being accused of having prepared terrorist acts on the territory of the peninsula. Now they are being kept in the Lefortovo pre-trial detention centre (Moscow). There are reasons to believe that the detained Ukrainians have been tortured. On 08.08.2014, the Ministry of Foreign Affairs of Ukraine made a statement that it considers the detained Crimeans to be political prisoners kept by Russian authorities as hostages.

The case of the Crimean activists is closed for the wider public, as their advocates signed confidentiality undertakings which are for the benefit of the investigators. Taking into account the political nature of the charges, the non-publicity of the case actually leaves the activists no chances of unbiased court proceedings. The advocates’ signing of the confidentiality undertakings makes it impossible to identify what other Ukrainian citizens are involved into the case of preparing the terrorist acts in Crimea and might be facing the threat of being kidnapped and persecuted by the Russian security services.

The Open Dialog Foundation believes that the pressure put on Galina Dzhikayeva is aimed at making her testify against Oleg Sentsov, Gennady Afanasiev, Aleksey Chirniy and Aleksandr Kolchenko for the benefit of the investigators. It is obvious that the activists’ testimony obtained under torture is not sufficient to bring charges in the criminal case framed up by Russian security services – the case of ‘‘preparation of terrorist acts on the territory of the Crimean peninsula’’. We demand that the investigatory bodies of Russia stop the ungrounded prosecution of Ukrainian citizens.

The Open Dialog Foundation is appealing to the international community and the international human rights NGOs to express their protest over the prosecution of the Crimean activists. During the last few months our Foundation has already organised 3 monitoring missions to Russia in order to monitor the observance of law and of human rights in the criminal cases against the Ukrainian citizens kidnapped by Russian security services. We are appealing to the international community (in particular, UNO, PACE, OSCE, European Parliament) to display solidarity and to send regular monitoring missions aimed at preventing psychological and physical pressure on the Ukrainian citizens kidnapped by Russian security services.