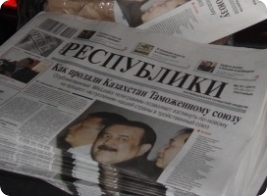 ‘Respublika’ expects arrests and searches as early as Monday

OSCE and OSCE’s Office for Democratic Institutions and Human Rights

We, the editorial team of Kazakhstan’s newspaper Golos Respubliki [The Voice of the Republic] received today a warning from a number of independent sources simultaneously that the journalists of our newspaper will become the next target of political repression carried out by officers of the intelligence agencies, supported by prosecutors and with participation of judges. Their aim is to prevent the newspaper from being published in the future.

We were warned that the newspapers’ employees already are under tight surveillance. Searches in the newspaper’s office, arrests, and confiscation of IT equipment, data storage devices, and documents are scheduled for Monday-Tuesday-Wednesday. The outline of the operation will be analogous to the case of Vzgliad [Look]. That is to say, it will involve searches in the flats of most prominent employees and simultaneously in the offices, confiscation of all equipment and data storage devices.

We were warned that the use of provocation is possible, including planting illegal drugs, planting leaflets that call for change of the regime and for overthrow of the current government. In this light we would like to state that we are ready for searches, confiscations of the computers and other office equipment, of the data storage devices and of the documents. WE HAVE NOTHING ILLEGAL in our possession. Therefore, if illegal drugs, weapons, ammunition, or leaflets in Arabic, Kazakh or Russian languages of subversive nature, calling to terror or to overthrowing of the authorities by force etc, are found in the newspaper’s offices, or those of the limited liability partnership, or at the employees’ homes, these findings would have been planted there by those who carry out the searches.

We are aware of the reason why we are next in line after Ruslan Simbinov, Aizhan Amirova, Vladimir Kozlov, Igor Vinyavsky and Serik Sapargali. It is precisely independent Kazakhstan mass media, including and foremost the newspaper Golos Respubliki that provide citizens of the country with objective information and that do not allow an “iron” information curtain to fence the country off from the rest of the world.

We are prepared for repression and pressure. They will not succeed in shutting us down in any case!