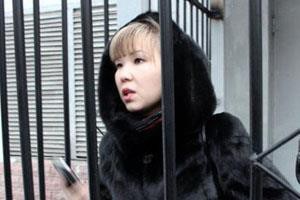 Alia Turusbekova, Vladimir Kozlov’s wife: “NSC attempts to isolate my husband and prevent him from communicating with me”

On the 23th of January, my husband, Vladimir Kozlov, was apprehended by the “Committee of Nazarbayev’s Security” on suspicion of inciting social discord. Judicial approval for an extension of his detention for two months was given in the premises of a detention centre of the National Security Committee of the city of Almaty, and no one was permitted to take part in the hearing. My husband’s lawyer was forced to sign an order to keep confidential the information pertaining to the investigation.

They also tried to summon me a witness in a criminal case, but I used my legal right not to testify against her husband, I refused to answer investigator’s questions and I wrote a complaint with the requirement to allow me to act as a defender. They denied my request, citing the fact that I am a witness. At the same time, they allowed Igor Vinyavski’s wife to act as his defender, although they made her sign a nondisclosure clause.

I regard these actions of investigators and the management investigation group of the NSC as an attempt to isolate my husband and to prevent him from communicating with me. This can only mean one thing: a direct moral and possibly physical pressure is being put on him, that is, tortures are being used. And in order to hide it, I was not permitted to see him under a false pretext.

In this regard, I hereby declare that if I am not permitted to act as a defender by the end of this week, that is, by the 3rd of February, 2012, it means that Vladimir Kozlov, the head of the People’s Party ‘Alga!” which is in the process of registration, is being tortured in order to make him admit his guilt and sign any papers that the investigators give him to sign, and to testify against his colleagues from the democratic movement.