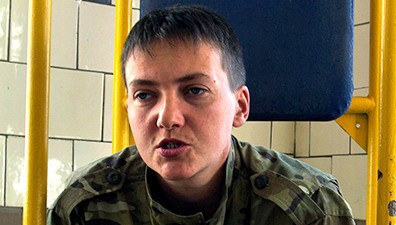 The court in Voronez has decided to extend the detention of the pilot N. Savchenko until 30 October and ordered, at the same time, that the Ukrainian lieutenant is to undergo so-called stationary expert psychiatric examination in the Serbsky Institute in Moscow.

The court’s ruling was announced even though the lawyers for the defence had challenged all evidence presented against Savchenko. The expert examination is to take place in the same psychiatric hospital in which Oleksiy Cherniy – EuroMaidan’s Crimean activist is being kept.

The referral to a psychiatric examination means that the Ukrainian lieutenant will be deprived of contact with the outside world – including her lawyers and Ukraine’s consular services. There is also a risk that Savchenko will be treated involuntary.

At the same time, the court refused to open a case concerning her abduction from the territory of Ukraine, rejecting the motion filed by Savchenko’s defence lawyers.

Savchenko had been part of the Anti-terrorist Operation in the east of Ukraine. On the 17th June, she was captured by Russian separatists in collaboration with Russian special services; she was illegally taken to Russia where a criminal case was opened against her. She is accused, amongst other things, of complicity in the killing of two journalists of the Russian public WGTRK station.