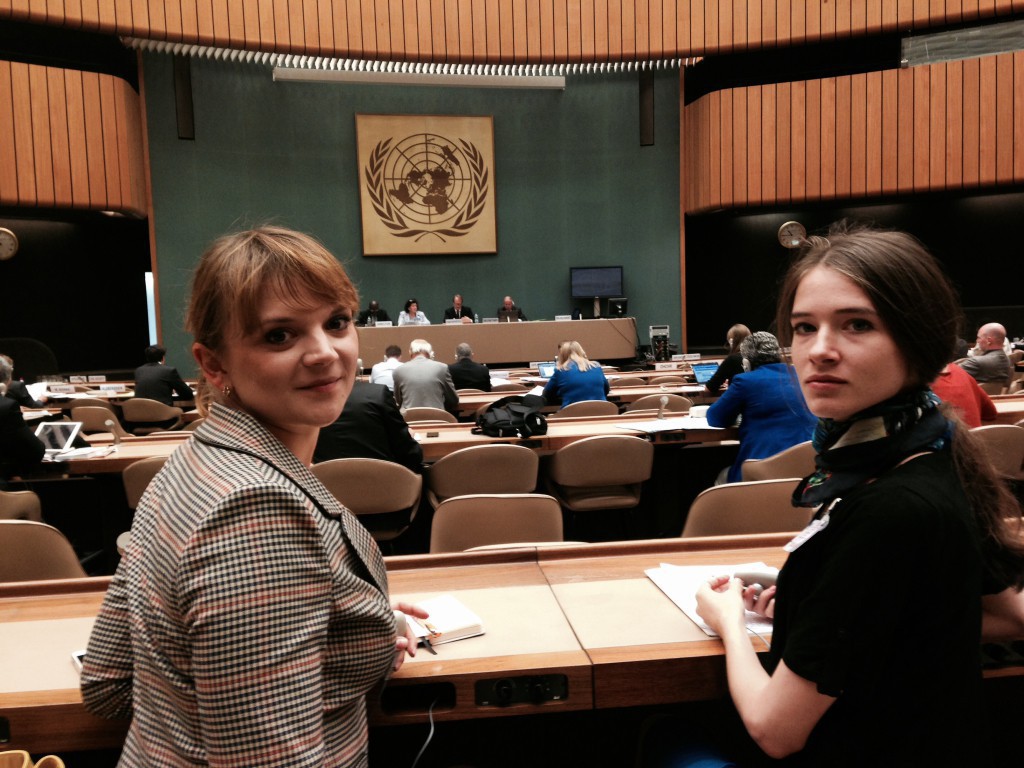 Analysts of the Open Dialog Foundation – Igor Savchenko, Andrii Osavoliuk, Katerina Savchenko –  and Anna Koj, the Head of the Foundation’s office in Brussels, took part in the session of the UN Working Group on Arbitrary Detention which was held in Geneva on September 1-2. The Human Rights Council has authorised the Working Group to prepare recommendations for the states providing the right to defence in court to everyone who was unlawfully detained or depraved of liberty.

The representatives of the Open Dialog Foundation informed the Working Group and the diplomatic missions of the European states on the cases of Kazakh political prisoners and victims of political oppression, on Ukrainian political prisoners in Russia and on the necessity of a comprehensive reform of the law enforcement system in order to minimise the corruption mechanisms which remained after the fall of Yanukovich’s regime.

«During the mass protests which were taking place throughout Ukraine from December 2013 to March 2014 Ukrainian law enforcement bodies committed a number of serious offences, in particular, unlawful arrests of the activists and persons not involved in the protest, number of criminal cases were opened against activists on political articles. The Open Dialog Foundation regularly monitored of the Maidan events, making human rights violations public. In addition, the Foundation provided practical support to activists via humanitarian missions and fundraising campaigns.

As soon as the protests started throughout Ukraine, their participants faced tough opposition from local authorities and pressure from the bodies of the Ministry of Internal Affairs. Protesters were violently dispersed by special divisions of the police, criminal cases were opened against persons detained. During the Maidan clashes in Kiev, 112 persons were killed, yet there is information about unidentified deceased persons and persons unaccounted for. Abundant photo and video evidence proves that the police officers acted with particular violence, crossing the legal limits of countering mass riots. Numerous violations of the rights of the third party – the journalists – were documented. In many cases the reporters were not just incidental victims – force was used against them intentionally, the shots fired by the law enforcement officers were targeted at the journalists.

There are evidences that courts cooperated with the prosecutor’s office in these cases, although such actions are forbidden by the law. So here we run into the problem of corrupted officials both in the police and courts. Events on Maidan are over, but there was no reform of the system yet. The problem of corruption in the security agencies therefore remains unresolved. What should be done if the problem is not only in formal procedural mechanisms, which already exist, but also in corrupted officials in state institutions, especially in courts and police? What institutional mechanism can be efficient?»

In their response the members of Working Group pointed that absence of independent judiciary and rule of law are important problem. Chairperson of the United Nations Human Rights Committee sir Nigel Rodley said that corruption and dependence of judiciary are two sides of one coin. Corruption is a systemic problem and easy decision can not be proposed. He think that the one available method is to address the issue.

«Very often victims of political repression have no opportunity to defend themselves within legal procedural mechanisms. The reason is that in authoritarian states the court depends on executive power and makes politically motivated decisions. The Open Dialog Foundation presents reports and organizes observation missions on cases of such Kazakh political prisoners as Vladimir Kozlov, RozaTuletayeva, Aron Atabek, Mukhtar Dzhakishev, Vadim Kuramshin, Zinaida Mukhortova.

It is important to raise not only the issue of the lack of procedural guarantees, but also the problem of the lack of an effective mechanism for their implementation. Statements by the Kazakh authorities on the democratic direction of development of the state are declarative, and democratic institutions exist only formally. Kazakhstan does not observe the guarantees regarding the provision of the right to a fair trial and systematically allows illegal arrests and detentions. The authorities refuse to address the systematic practice of torture in police stations and prisons.

Those arrested and convicted are not provided with adequate conditions of detention. The judicial system is a tool of oppression of political opponents. Illegally detained persons do not have the opportunity to contest their detention or to ensure their defence in court, as courts are not independent.

So, when the rule of law is absent, how the defense can be provided by judicial mechanism? It is worth for Working Group to consider possible institutional mechanism to solve this problem».

In his response Chairperson of the United Nations Subcommittee on Prevention of Torture Mr. Malcolm Evans said that the difficultly of solving problem of dependent court is «how» to do that. Also, he agreed that there are problems with detainees in cases when state authorities do not do what they should. Member of the United Nations Human Rights Committee Mr. Gerald L. Neuman pointed that national courts should act in compliance with international law.

Also, Igor Savchenko asked Vice-Chair of the United Nations Working Group on Arbitrary Detention Vladimir Tochilovsky what to do with arbitrary detentions in authoritarian states where the rule of law and independent judiciary are absent. Vladimir Tochilovsky answered that it is complicated to fight with arbitrary detentions when there is no division of powers. In case of absence of fair trial judicial mechanisms run into obstacles.

«Russian armed intervention took place in the Eastern Ukraine. But officially Russia doesn’t recognize presence of it’s armed forces in Ukraine.  During intervention Russian troops capture Ukrainian soldiers and civilians. After that they are taken to Russia and face criminal persecution.

Our Foundation monitors few cases against Ukrainians who were kidnapped from the territory of Ukraine and now face criminal persecution in Russia (for examples the case of Nadiya Savchenko and the case of Oleg Sentsov). In general there’re several dozen of Ukrainians in Russia captivity. In fact, they are prisoners of war.

However, the war between Russia and Ukraine is not declared officially, so Ukrainians are captured in detention as if they are criminals. Charges are fabricated.

The question is – whether there’re effective institutional and juridical mechanisms to prevent abuse of criminal persecution during such armed conflicts?»

More on this topic:
Ukraine , UN