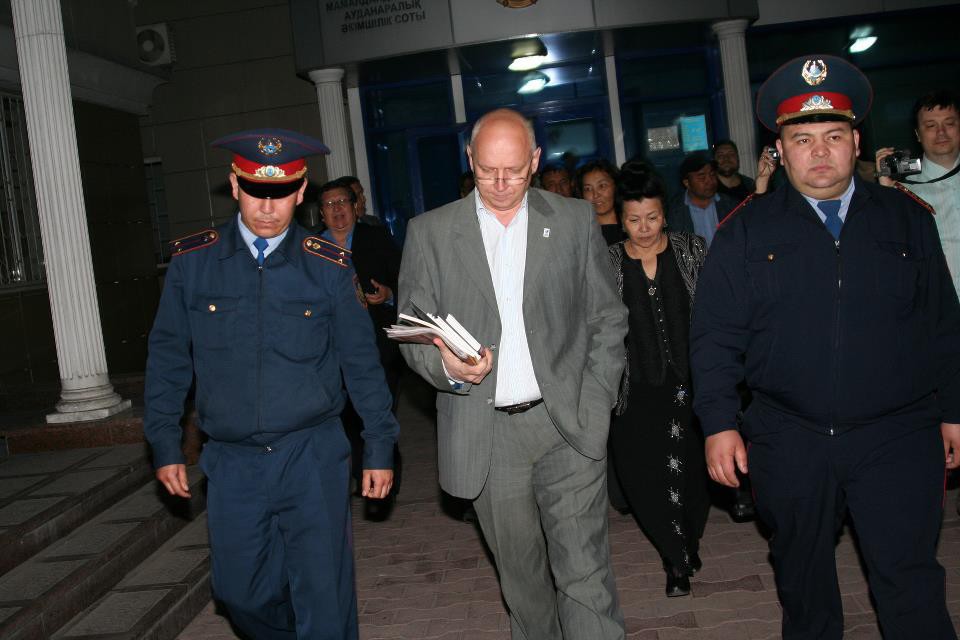 The appeals of Vladimir Kozlov, the leader of the unregistered opposition party ‘Alga’, and Serik Sapargali, an opposition politician, were rejected on the 3rd of February by the Appellate Court of the city of Almaty. Vladimir Kozlov and Serik Sapargali’s criminal cases are conducted by investigators of the Department of National Security Committee of the Mangistau Province.

Bolat Atabayev (a film director, an activist of the ‘Khaldyk Maidany’ movement) received a decision on the change of his status from ‘the suspect’ to that of ‘the accused’. The decision was handed to him on the 3rd of February, 2012, in the Department of the National Security Committee of the city of Almaty. As the evidence of having committed criminal acts stipulated in Article 164, paragraph 3 of the Criminal Code, he is charged with delivering a speech in the city of Zhanaozen. In case of Bolat Atabayev, a prevention measure was used – he had to sign a written pledge not to leave the city.

A day earlier, on the 2nd of February, 2012, the decision to change the status to ‘the defendant’ was delivered to Zhanbolat Mamai, the head of the ‘Rukh pen til’ youth movement.

Bolat Atabayev, Vladimir Kozlov, Zhanbolat Mamai and Serik Sapargali are accused of inciting social hatred (under Article 164 of the Criminal Code). On the 26th of January, 2012, the Almalinski court of the city of Almaty sanctioned the arrest for Igor Vinyavskiy, Vladimir Kozlov and Serik Sapargali at a closed court hearing. They were detained on the 23rd of January, 2012, by the officers of the National Security Committee of Kazakhstan. Earlier that day, searches in the office of the editorial staff of the ‘Respublika’ newspaper, the office of the ‘Alga’ party  as well as in the men’s houses were undertaken.

The investigators link the charges with the tragic events in the city of Zhanaozen, the Mangistau Province, which took place on the 16th of December 2011, resulting in 16 fatalities, according to official data.

Bolat Atabayev, born in 1952, a film director, a member of the ‘Khalyk Maidany’ movement, an art director in the ‘Aksarai’ theatre.

Zhanbolat Mamai, born in 1988, a journalist, the leader of the Kazakhstani organisation ‘Rukh pen til’.

Vladimir Kozlov,  born in 1960. A journalist, since 2007 he has held the post of the Chairman of the Coordination Committee of the ‘Alga!’ People’s Party.  In 2012, he was nominated for the Freedom Award. Before his apprehension, Vladimir Kozlov refused to accept the award to the benefit of Aizhangul Amirova. In this connection, the Steering Committee made a decision to give a separate award to Valdimir Kozlov.

Serik Sapargali, born in 1952. An activist of the ‘Khalyk Maidany’ organisation. In 2011, he ran for the Presidency of Kazakhstan, but he  was not registered.