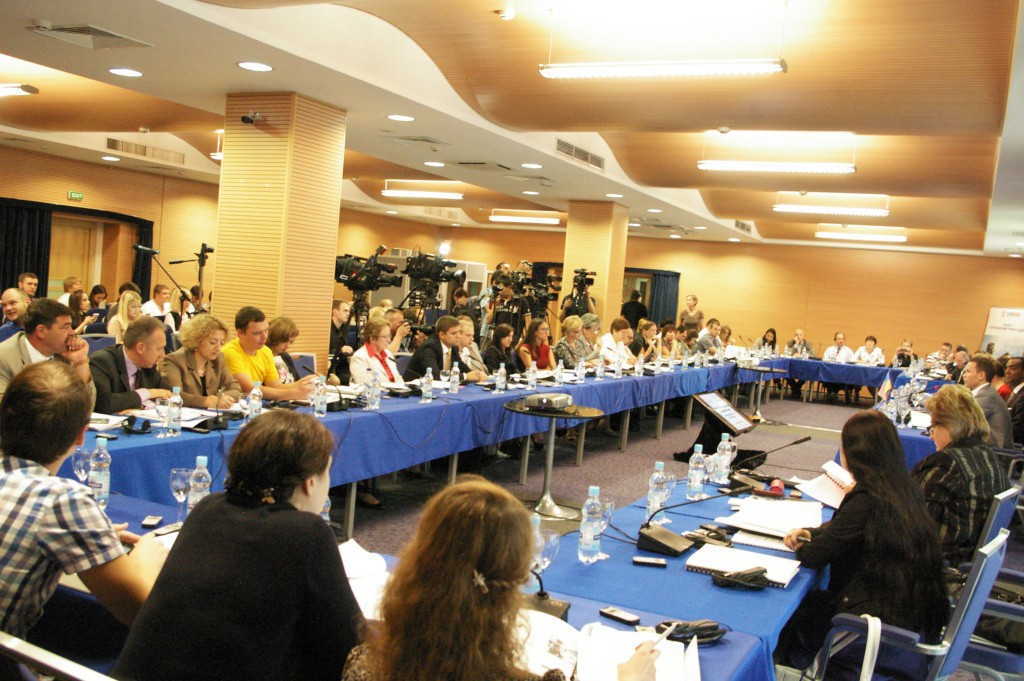 Summary of the round table ‘Lustration: International experiences and prospects in Ukraine’

On 11 September, 2014, a round table ‘Lustration: International experiences and prospects in Ukraine’, organised jointly by the Kiev office of the Open Dialog Foundation and USAID FAIR Justice Project, was held at the President Hotel, Kiev.

The event was attended by members of the Verkhovna Rada of Ukraine, lawyers, representatives of civil society from the regions and from Kiev, the Specialized Administrative Court and the Interim Committee for Verification of Judges, as well as diplomatic corps.

Discussion on the current state of works on the Law numbered 4359a ‘On lustration of state administration’, and on the practical aspects of the work of the Interim Committee constituted the first part of the meeting.

Yuriy Derevyanko from the Volya party and Oleh Bondarchuk from the Svoboda party presented the history of works on the law and expressed their hope for its adoption through a vote on 16 September, 2014. Yehor Sobolev, Chairman of the Lustration Committee of Ukraine stressed that, without lustration, Ukraine will not maintain independence. In turn, lawyer Leonid Antonenko elaborated on the technical shortcomings of the Law and the areas in which, in his opinion, it needs to be improved.

The discussion was heated, as we succeeded in gathering both circles who support the lustration process, and those who oppose it. Experts also had differing opinions regarding the practical aspects of the process’ implementation.

Experts and MPs, along with David Vaughn, the director of USAID FAIR Justice Project and Lyudmyla Kozlovska, also took part in a press conference.

The special guest of the event was Professor Roger Myerson, Nobel laureate in economics. He pointed out that it is necessary to ensure the appropriate training of public servants – from local government units up to the central level.

The second session was devoted to the experience of lustration in Poland and the Czech Republic. In its framework, the experts – prof. Roman David from Lingnan University in Hong Kong,  Radoslaw Peterman Ph.D., Deputy Director of the Lustration Office of the Institute of National Remembrance and Pavel Žáček, Ph.D., the founder and first president of the Czech Institute for the Study of Totalitarian Regimes in Prague, and attorney Paweł Osik, representing the Commission on Human Rights in the Polish Bar Council, discussed the practical aspects of lustration and its compliance with international law.

The third part of the meeting concerned the aspects of the verification of the work of judges. Anna Suchova from USAID FAIR Justice Project presented the process of verifying the work of judges in the light of the judgments of the European Court of Human Rights in Strasbourg. Teresa Gardocka, a professor of criminal law, the deputy rector of the Warsaw School of Social Sciences and Humanities, conveyed facts about the Polish experience in this matter. A representative of the civil society, Oleksiy Buryachenko, also expressed his opinion in the discussion.

What conclusions can be drawn from the event? The lawyers have expressed their consensus about the need to adapt the law which would be consistent with the requirements of the EU, but the idea is not yet clear to MPs and ordinary citizens. The requirements of the Council of Europe and, in particular, Resolution 1096 (1996), which grants the right to appeal to the person subject to verification, still arouse concerns. The participants also agreed with Yehor Sobolev who stressed that the justice system leaves much to be desired, as it cannot be trusted and therefore there is no clear answer to the question as to how to conduct the lustration process so that the corrupt courts would cease to rule in favour of the accused in the absence of evidence and against common sense. It is therefore necessary to create such legitimacy of the Interim Committee for Verification of Judges, which will give the body appropriate instruments to perform its tasks. For this reason, the Kiev office of the Open Dialog Foundation intends to continue its cooperation with USAID FAIR Justice Project by providing expertise and further support for the lustration process by enhancing the quality of public debate, with the assistance of experts.

On behalf of the Open Dialog Foundation, the coordinator of the project thanked the experts who have worked pro bono on the opinions on the Law ‘On Lustration of State Administration’ for many months. Their support constitutes genuine help for Ukraine, for which we hereby express our gratitude – especially to Mr. Radosław Peterman from the Institute of Nationale Remembrance, Pavel Žáček, Ph.D., who is now a consultant to the Czech Ministry of Defence, Professor Roman David from the Lingnan University, Petruška Šustrová, the legend of the Czech opposition, signatory of Charter 77, and the aforementioned attorney Paweł Osik, as well as Bohdan Vitvitskiy, former Deputy General Prosecutor of the United States. During the meetings in Kiev, Dr. Peterman and Dr. Žáček made significant contributions to the deepening of understanding of what lustration is about – Agnieszka Piasecka stated.