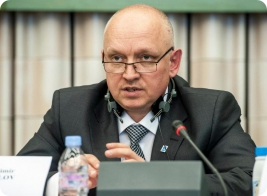 Vladimir Kozlov is convinced that the charges filed against him are contrived. “The authorities are taking revenge against me for my support of the strikers in Zhanaozen” – he said today during the visit of his wife, Alia. Incidentally, the investigator Shaiyken Nazym did not permit her to give him food and other things yet failed to provide an explanation as to why this wasn’t allowed. According to close associates of the ‘Alga’ leader, it is evident that psychological pressure is being applied to the detainee.

They scheduled Alia’s visitation of Vladimir Kozlov for this morning. In order not to miss it, she had to return immediately to Kazakhstan from Warsaw, where she participated in a meeting with veterans of the Polish movement ‘Solidarity’, who spoke in support of the detained politician. We had a chance to talk with her immediately after the meeting.

– Alia, how do you assess the state of Vladimir Ivanovich? How does he feel?

–  He is cheerful. However, the very fact of his incarceration infuriates him, since there is no evidence against him. According to him, as many as 300 people have already been questioned in the case, but apart from Ablyazov’s statement, they have uncovered nothing else that could be used against him.

Generally speaking, we had a very short conversation. Although, according to the law, I have the right to have a 3-hour visitation, I was allowed only 15 minutes. The conversation was conducted through glass in the presence of an NSC worker who kept interrupting our conversation all the time, and when I was saying that someone asked to give his regards to my husband, the worker kept asking who this person was – the one that sent his greetings.

Besides, I still do not have permission to pass any food or clothes, and I am denied this right without any explanation. I guess that this is done on purpose – this is a kind of psychological pressure which is being put on him.

Also, my husband said that it is likely that soon he is going to be transferred to Zhanaozen.

– What about his state of health? Will he need surgery?

– Surgery is necessary, because the pain persists, and swelling has appeared. But he was told that he is going to be scheduled for elective operation so it is still uncertain when the surgery is going to be executed. But the longer they postpone the operation, the more difficult it is going to be, – the hernia may become incarcerated etc.

– Have you written a request to the investigator to execute the surgery yet?

– There was a petition sent by the ‘Amansaulyk’ Social Foundation in which they appealed to the NSC regarding his health and regarding the planned operation. I will personally write a request too.

–  Tell us why you flew to Warsaw? What was happening there?

– I took part in a press-conference with veterans of the Polish movement ‘Solidarity’, who spoke in support of Vladimir. I met with OSCE representatives, which have expressed their readiness to convey the information about the true situation regarding his arrest, as well as the general situation in Kazakhstan to the international community.

We also participated in a programme on Polish TV, dedicated to post-Soviet countries, particularly Russia and Kazakhstan. It covered the issues of Zhanaozen and reprisals against opposition politicians.

–  How do foreign politicians evaluate what is happening in Kazakhstan today?

– They are no longer surprised with the very facts. But, of course, many were shocked that the arrests and searches took place almost immediately after Vladimir Kozlov and his colleagues returned from the European Parliament, where they informed the international community of the events in Zhanaozen. They consider this a momentus event: the authorities showed their true colours, the state began all-out oppression against its own people. At the very same press-conference people were absolutely mortified by video footage of police shooting at oil workers.

– Did you have to go back to Kazakhstan earlier because of the scheduled visitation? Where else were you planning to go?

– I do not know if it was a coincidence or an accident, but I received a permit to visit my husband on the 6th of February, 2012, although they knew that I would be in the country no earlier than the 9th of December.  I planned to go to Berlin, where representatives of the European Parliament were awaiting me. These were the same representatives of the EP who met with my husband literally two days before he was apprehended. The MEPs were concerned that I may also be apprehended after my return to the country, but I felt compelled to use my right to visit my husband and in order to do that, I had to go back to Kazakhstan. I just had to see my husband.

By the way, foreign politicians do not understand why I was not permitted to become my husband’s defence lawyer, and they link it with possible provocations against him.

–  And how do the NSC workers explain the fact that they did not allow you to become his defence lawyer?

I remember how long he was looking at my marriage certificate. When I asked what he was doing, he replied that he was checking it to determine if it was falsified as according to his knowledge, there is no record of a marriage between me and Kozlov.

– What are you going to do next?

–  I am going to file an appeal in the court against the refusal to allow me to be my husband’s legal representative and I am prepared to go through all the motions. And of course, I am going to demonstrate the absurdity and illegality of this political case. I will exhaust all possible ways to bring about the release of my husband, and to help the families of other detainees to prove the innocence of their loved ones.