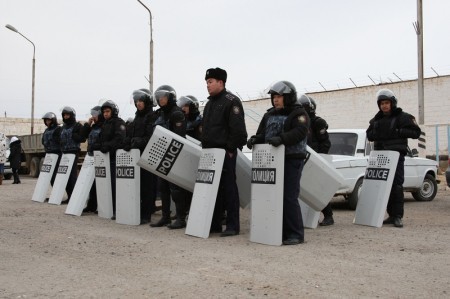 ‘Alga!’ activists were ordered to report for questioning

On Monday, the 6th of February, the ‘Alga!’ office in Petropavlovsk was seized. The operation was preceded by a phone call made by an unknown person who asked after the owner of the premises. Later, a group of law enforcement officers came to the office, they entered the office by force and announced that the apartment is being seized. All those who were present were forced to sign a statement confirming that the responsibility for the safety of the property lies with them.

On the same day, in Kostanay, security forces workers dressed in civilian clothes raided the office, and, referring to the decision of Toyzhan Marat, the prosecutor of Zhanaozen, announced the seizure of the premises belonging to Vladimir Kozlov, the leader of the ‘Alga!’ party who was apprehended on the 23th of January.

On Tuesday, the 7th of February, the NSC raided the ‘Alga!’ party office in the town of Kyzylorda, presenting a warrant  for the seizure of the office. The NSC workers, namely: Daniyar Egeshbaev and Adil Saylybaev came to give explanations and to draw up the minutes from the seizure of the ‘Alga!’ party office. Four activists of the party were handed orders to report for questioning to the NSC.

Also, on the 7th of February, three NSC workers burst into the Kokshetau office of the ‘Alga!’ party and announced the seizure of the apartment.

In Petropavlovsk, Marina Nistoliy was handed an order to report for interrogation which is going to be carried out by the investigator Tankenov. The order was delivered by the NSC worker Kulmagambetov.

In connection with more and more frequent actions aimed at blocking the work of the ‘Alga!’ party, The Open Dialog Foundation demands from the Kazakh authorities to act in line with their commitment to comply with international regulations. Also, we would like to underline the fact that, according to the article under which Kozlov is prosecuted (Article 164 of the Criminal Code – “inciting social, national, tribal, racial or religious hatred”), does not provide for the confiscation of property. We demand the release of the detained journalists of the opposition media and activists of the strike movement of oil industry workers and to carry out an open investigation into the events which took place in Zhanaozen on the 16th of December, 2011.

The Open Dialog Foundation hereby urges international human rights organisations, the representative bodies of the European Union, the political leaders of EU member states to follow the course of events surrounding the detention of Igor Vinyavskiy, Vladimir Kozlov and other activists, and to prevent the Kazakh authorities from succeeding in their attempts to take control of independent media agencies and non-governmental associations.