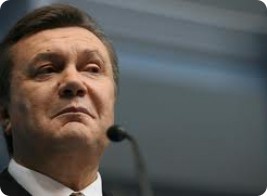 On the eve of the local elections both the opposition and the massmedia kept repeating the wary premonitions: as soon as the elections are over, the hell will break loose.

The “hell” though meant different things: a flood of dismissals for officials who outstayed their welcome, intensified redivision of economy, harsher persecutions of the opposition, further circumscription of mass media right (and obligation) to inform the public…

Yet two week after the election, and the government took no significant steps whatsoever. Replacing a loyal General Attorney Medvedko with the infinitely staunch Pshonka is just another “fine-tuning” of the constructed power machine.

Knowing that Yanukovych’s strategic vision of the national development is traditionally crippled, the multi-move advocates can hardly  expect any sort of well-considered and verified long-term development program from the President.

No such serious projects from the Party of Regions is a mandatory program. Remember that textbook case of missing deadlines and shallow “economic strategy” of the President-elect?

Right now the hottest news is that the President refuses to take any partially serious measures. There are a few causes underlying this situation.

First, the October 31 local elections brought to its end the period of arithmetic accumulation of powers in the President’s hands. The new motto of the winning October revolution, which in fact started back in February when Yanukovych won the presidential elections, – “All power not to the soviets, but to the hands of Viktor Yanukovych personally.”

So now the President concentrated more powers than Kuchma ever did. Opposition is scattered and irrelevant. Financial flows are controlled. Local power has also been pocketed by the President. This is what Russian political humorists teasingly named “Viktor Almighty.”

Yet, simultaneously with the final concentration of powers more and more evident becomes the disproportion between a single-man power and his readiness to take up responsibility at least slightly comparable to the scope of the President’s power.

Experts, oppositionists and even far-sighted Regionals (the latter are very quiet about it, though) have long since warned us: if the President wants to have all-embracing control – then all responsibility for the country’s state of affairs will also fall on his own shoulders. The time has come.

By persistently driving the opposition into a ghetto, and by recklessly collecting more and more powers in his hands, the President has reached a point with the “FULL RESPONSIBILITY” road sign.

This point could have become a starting point if Yanukovych was General de Gaulle’s follower and strived for imposing order with harsh measures to ensure implementation of genuine reforms.

Unfortunately, it was no less than a finish line which tallied up the stage of collecting power for the sake of power alone.

Yanukovych’s nine months in office proved that the national “de Gaulle” mopped out the political field with the sole purpose of collecting powers in the process. And not for the purpose of some abstract reforms with the inevitably unpopular measures, curtailing business appetites of his entourage, systematic and painstaking work.

But he is always eager to say beautiful words about future reforms. Just as his predecessor, Yanukovych gladly tours the country and tells tales about how our life under his government is getting better and better with the speed of a Formula-1 bolide.

But the current President keeps failing at putting to practice his predecessor’s motto “Not by word, but by deed.”

His erected construction is strong only on the outside. In its heart the contemporary government is faltering. It reminds more of a colossus with feet of clay than a powerful elephant in his prime. The feet are of clay because in any democratic and healthy country the efficient power is built from bottom to top not top to bottom.

If the body is healthy, life is thriving there: civil society is actually functioning, courts and media are independent from the state, political competition, transparent and sensible taxes, interaction between the government and society and the like.

The list of things composing a strong European state and how it differs from a hut built by our feeble power is far from being complete.

The government is feeble indeed, so feeble that it’s unable to implement a single reform. All it can do is to propose a reformist substitute in the form of the announced administrative “perestroika.”

It’s nothing but a substitute because, even if Irina Akimova’s cumbersome realization concept does prove successful, the number of civil servants as a result of this reform will double. It has already been proved on the experience of all previous Ukrainian presidents.

In any case, the government has spent the last six months telling the citizens how the reforms are “about to start.” In the West such long talks about reform plans are impossible without inevitable uncomfortable questions about the real state of affairs.

Wary but seemingly benevolent relations with the West during the first months of Yanukovych’s office are now being subject to thorough revision.

After visual demonstration of what “fair elections” mean for the Party of Regions, no European or American partners could turn their blind eye to the ruling style of the current authorities, among this, to the problems faced by Western businesses in Ukraine. Nor could they any longer pretend that Western governments firmly believe that the Regionals, after all falsifications in 2004, have become totally and qualitatively different.

An especially difficult task was to publicly state the equivalence of the PR (r), in other words, reloaded, to the daily practices of the Ukrainian authorities. It was still possible to do before the practical exam – new local elections. But it is no longer possible after the triumph of the Party of Region – style democracy on October 31.

No diplomatic extravagances were fit to disguise a wave of evidence proving no transparency, fairness and justice during the elections, all the “sacred cows” of the Western society viewed as absurd by the Ukrainian government.

Yet, we need to give credit to the diplomatic successes of the Western partners – for dear life they tried to play by the rules and diplomatically reduced their concern to the norms of the imperfect Law on Elections.

This is nothing compared to the “Viktor Almighty” label given by one of the Kremlin-controlled TV channel. But the wake-up call for the Ukrainian authorities has sounded. And they heard it.

The ostentatious idyll with the Kremlin has come to its end a little earlier – right after the Russians moved from declarations of sincere Slavic friendship to practical attempts to get their claws into bits of economic goods.

In response to such neighborly claims, Yanukovych and his entourage firmly and clearly said “Hands off!”

The Russians seemed to agree that “Friends are OK when they don’t get in the way.” But only if the rule was set by them. They also hoped to get as much from the Ukrainians as long as the veil of normal friendly relations disguised the common pragmatism.

But “the bubble has burst” and Yanukovych gave the brush-off to Putin himself. What he got in return was a propaganda gab about “Viktor Almighty”. In short, a regular, adequate pragmatics of a two-way relationship has taken over.

This is how virtual software “Viktor Almighty” failed at all three major directions: at home, on the Western front and in the Kremlin. The time has come to discard the omnipotence ghost hunting for its own sake and roll up the sleeves and start developing the country and the society.

Otherwise, you never know, the Slavic brothers, and what’s more important, the Ukrainian society might get brave enough to say that the king is naked.

The ruling team has all resources for such kind of work. What they lack is a political will. The government has not even started writing the “Viktor Reforming” program. As this will be much more complicated than the last version – a game with omnipotent winning hero.

The deadline is approaching and the work needs to start right now so that by the next parliamentary elections in 2012 the government had at least a modicum of positive reform results to show to their country.