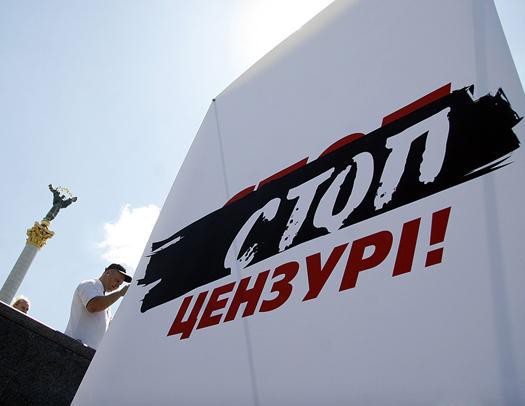 The Statement of the ‘Stop Censorship!’ movement (Ukraine) on the prevention of oppression in Kazakhstan

The Ukrainian journalistic movement ‘Stop Censorship!’ strongly condemns the oppression that the Kazakh authorities have subjected independent journalists to. Under the pretext of protecting national security, the local authority carries out apprehensions of journalists and searches in those media which provided information platforms to opposition organisations and conducted an investigation of the situation in Zhanaozen, where riots took place in December 2011.

In particular, on the 23rd of January, a search of the ‘Vzglyad’ newspaper was undertaken. During the operation, informational materials and office equipment were confiscated, and Igor Vinyavskiy, the journalist, was detained. Also the team of the ‘Stan TV’ reporters was apprehended during their stay in Zhanaozen. Editorial stuff of the opposition websites: Guljan.org, Respublika-kaz.info, Algadvk.kz repeatedly reported Ddos-attacks made on their servers.

On the 2nd of February, pressure started to be applied to the “Golos Respubliki’, the main independent newspaper in Kazakhstan. The newspaper office was searched, computers and informational materials were seized, and the deputy editor of the “Golos…”, Oksana Makushina has been reporting for questioning in the National Security Committee of Kazakhstan for several days in a row now.

The ‘Stop Censorship movement is indignant with the actions undertaken by the Kazakh authorities, and regards them as an attack against freedom of expression and independent journalism.

We hereby urge Ukrainian and foreign journalists and bloggers, activists of social movements and organisations to prevent the silent destruction of free speech in Kazakhstan, and to spread information about the detention of the Kazakh journalists on the pages of their media and by means of social networks as widely as possible.

We are convinced that the joint and public stance of journalists and defenders of human rights in different countries will help to achieve the release of detained journalists, and to avoid further aggravation of oppression.

The “Stop Censorship!” social movement was established on the 21st of May, 2010.The movement is an informal association of journalists, which was formed in response to the oppression of freedom of speech in Ukraine. This is an initiative of Ukrainian journalists and media non-governmental organisations which fight for the right to freedom of speech and strive to prevent the increase of censorship in Ukraine, to prevent restriction on the professional activities of journalists and violation of professional standards in broadcasting socio-political issues.The ‘Stop censorship!’ social movement does not support any political force, nor is it funded by any political parties.